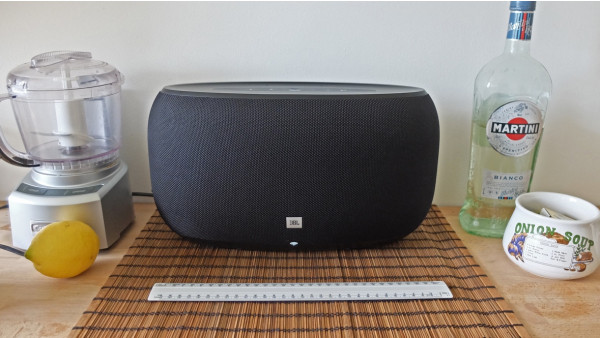 Smart speakers are sounding better and better, and now there are all sorts of specs, designs and prices for Google Assistant powered speakers - it's not Google Home or nothing.

JBL is going for the beginner-friendly, mainstream approach with its connected Link series of Bluetooth and Wi-Fi speakers, with the Link 500 front and centre of the group.

Read this: How to set up Google Home parental controls

We've been living with the JBL Link 500 to see how we get on with a more substantial, third-party Assistant speaker. Here's what happened.

This is a fairly hefty smart speaker weighing 3.5kg and measuring 37 x 20 x 15.7cm in dimensions. It also needs mains power to work, so you probably won't be moving it around the house like some other, smaller smart speakers.

Personally, for the living room I'd rather go for something with more of a statement design than this as the Link 500 doesn't have a ton of aesthetic personality compared to some rival speakers, including the soft finishes on Google's Home series. But its friendly, curvy form factor won't offend anyone either.

There's a mesh grille on the front and a black plastic top for the physical buttons: Bluetooth pairing, Google Assistant wake up, volume +/-, play/pause and an Assistant mute button. Also on the front is a glowing Wi-Fi icon and four LED dots that blink or light up to show Google Assistant is listening. Round the back of the speaker you'll find a passive radiator that vibrates when you use it and the port for the power cable at the bottom.

The Link 500 functions as a few things - a standalone Google Assistant-controlled Wi-Fi speaker, a Bluetooth speaker, and one part of a multi-room speaker system connected by Google Chromecast and the Google Home app.

Everything is geared around wireless controls and voice controls so there's no aux-in - that might be a deal breaker if you want an all-in-one that can do everything. There's no need to download a JBL app, and there's no physical remote control. To get going, just set it up in the Google Home app as you would a Google-branded smart speaker. It should be discovered as soon as you plug it into power and fire up the app, though it did take us a few attempts to complete the process. Once that's done you can rename it, group it and add it to a room as part of a connected multi-room system in the Device tab of the Home app. It's all pretty straightforward, especially if you've used Google Assistant devices before.

One big reason you might be interested in the JBL Link 500 is that it's the flagship of JBL's varied and versatile range of Google Assistant powered speakers. With a range of specs, shapes and prices, you can pick and choose between the Link 10, Link 20, Link 300 and Link 500 for the rooms you're looking to fill - or if you already have a Home or Home Mini and the Google Home Max isn' yet available in your country, you might go for the Link 500 to plug that gap.

The fact that Chromecast is built in means it handle music playback up to 24-bit/96kHz and can join a system of any other Chromecast powered speakers (of which the list is now pretty impressive). And don't forget it can also control your TV if that either has Chromecast built-in (such as an Android TV) or a physical Chromecast streaming stick.

If you're jumping into Assistant, it might be unlikely you'll end up using Bluetooth on the Link 500 but it's there if you want it - as we said, the pairing button is sat up top.

Most of the very popular smart speakers we've tested so far have been of the affordable, semi-portable variety, but voice assistants are slowly creeping up to larger and more high-end speakers.

And if you're paying this much money, and making this much space on your shelf, you'll no doubt want a speaker that can fill a room. In that sense, the JBL Link 500 really delivers with a loud, powerful stereo sound that's suited to parties - it's a lot of fun. Certainly a step up from weedier speakers, its nearest rival is the Google Home Max - which we haven't been able to test side by side yet, but we'll update this review when we do.

There's two 89mm mid/bass woofers and two 20mm tweeters in here; you'll get a slightly warmer sound from the likes of Sonos but overall, this is a nicely well balanced speaker performance. It's also worth noting that we had no problems with our "Hey Google" voice commands being picked up even when we were blasting out some Hues Corporation in the kitchen.

The star of the show is, of course, Google Assistant and the JBL Link 500 does (almost) everything a Google Home speaker can do. There are a few features which are lagging on third party speakers such as voice calls, but the majority of functions are identical. Alexa still hogs the headlines but Google now matches almost all of Amazon's major features - and in some ways tops them.

Particularly we like the awesome ability to set up Voice Match for multiple members of the household with personal media profiles. So say goodbye to arguing over one person's Spotify account (as per Alexa) when you can all let Google identify you individually by voice.

Google Assistant is getting more and more accurate and is also noticeably better than Alexa at answering both internet-based queries and anything to do with Google's own apps, like the Google Calendar.

As well as new Continued Conversation features rolling out this year (which again might arrive on JBL later than Google Home), multi-step Routines are still the big new thing when it comes to automating your smart home, but these aren't live everywhere globally yet. With native controls coming to more types of devices and the ability to switch voices, Google could easily leapfrog Alexa this year.

JBL Link 500
A neat alternative to the Google Home Max - especially where that's not available - the Link 500 is well worth considering if you want to stuff your home full of powerful, Google Assistant-powered speakers. A solid all-rounder with Bluetooth on board, this JBL is good value for money.
PROS
CONS
TAGGED    smart speakers