A hybrid soundbar that flatters to deceive 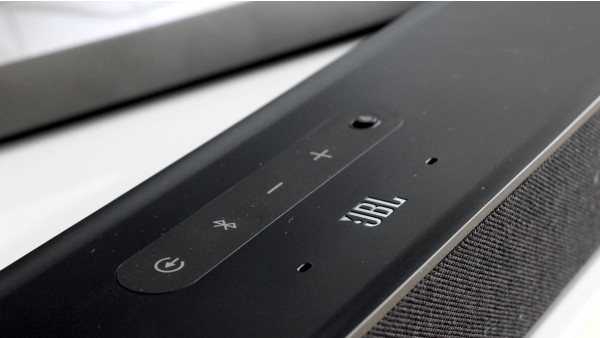 At first glance, the JBL Link Bar may just seem like another run-of-the-mill smart soundbar. However, this is a device that actually represents a first for the industry.

Announced in May 2018, before setbacks resulted in a late launch this July, the Link Bar is the first to marry together the brains of Google Assistant and the company's smart TV platform, Android TV.

When Google first pulled back the curtain on the partnership at its I/O conference 17 months ago, it suggested this kind of soundbar would be the first in a series of "hybrids" from third-party makers.

We're yet to hear anything more about them - a troubling sign - making this an even more interesting case to explore. And with a price tag of $399.95, it's also competing on the same turf as the Sonos Beam, Polk Command Bar and more.

So, how does it perform? Read on for our full review.

Soundbars are almost exclusively dark slabs of fabric mesh and plastic - but, even so, we like the look of this particular brand of fabric and plastic from JBL.

The build quality feels solid, and the rounded edges and flat top and bottom are reminiscent of the Sonos Beam.

The 40-inch Link Bar packs in a pair of 0.8-inch tweeters and four 'racetrack' drivers, as the company describes, which are around 1.7-inch x 3.2-inch in size. At the top end of its power, the built-in amplifier kicks out sound at 100 watts.

So, nothing too out of the ordinary there, and easily enough enough heft to help this become an impressive smart speaker.

On that flat top we just mentioned, you have the typical control panel, consisting of a Bluetooth finder, volume adjusters, a microphone mute switch, and an output toggle.

Like with every other soundbar, we pretty much exclusively use this panel to turn the microphone off, as the rest can be done through the bundled remote control, which we'll come onto shortly.

On the back is where the power cord lives, and barely manages to stay in, along with ports for optical, auxiliary and HDMI inputs.

We had the Xbox One and the Nintendo Switch hooked up in two of those slots, and switching between them, as well as the Android TV homepage, was a breeze.

If you have the compatible $300 JBL SW10 subwoofer (we didn't, as it's only available in the US, and we were testing in the UK), you can also pair this through the button on the back.

As we will come onto further below, however, the JBL Link Bar only has 4GB of internal storage - so those of you planning to download and use Android TV a lot will have to make do.

There's also no USB port on the rear for connecting hard drives and the like.

We're not used to a voice assistant in a smart soundbar taking a back seat, but it very much does on the Link Bar.

Trying to summon Google Assistant through your voice is, at best, inconsistent, and, at worse, completely pointless. During our first couple of weeks with the device, we didn't have too many issues - it would respond when the TV was off and there was no speed issues.

However, in the last week or so, it's been consistently beaten to the punch by the Lenovo Smart Display, which sits about ten yards away in the kitchen.

That's if we get it to hear us at all, as it often just won't wake, whether the TV is on or not.

The root cause of the problem isn't known, but if you quickly scroll through forums and other reviews, you'll see this isn't an issue exclusive to our review model.

Oddly, this kind of mixed experience with the Assistant was also present on the Harman Kardon Citation Bar - the high-end brand to JBL.

If you do want to kick Google into action, it's actually fairly zippy through the button on the remote, and prompting it this way also doesn't invite the other eight Assistant devices within earshot to also pipe up at the same time, since you won't need to use the usual, "Hey, Google" wake command.

However, that doesn't solve all the Assistant-related issues, as the Link Bar also can't be added to speaker groups, meaning there's no way for you to pump out multi-room audio with your other speakers.

On the whole, it feels like a really half-baked attempt to integrate Google Assistant into the Link Bar, and, aside from the help you get from standard Bluetooth support and Google casting (no AirPlay), it's a bit of a failure as a smart speaker.

Even if Google Assistant doesn't quite cut it, the JBL Link Bar still has Android TV to make it worthwhile, right? Well, yes and no.

While this, in theory, can eliminate the need for a Fire TV or Roku, we can't imagine many people looking to buy this will have a TV without some kind of smart software already built in.

So, really, this feels more about just converting you to Android TV, rather than providing something you probably don't already have in another form.

And even if you do like the Android TV interface - and we do - the version you get through the Link Bar isn't quite as good as the one you'll get through, say, the Nvidia Shield.

And with no USB port in the rear, either, that means those wishing to connect the likes of external hard drives for their apps and downloads are going to be disappointed.

Thankfully, if you do decide to connect your HDMI directly through the soundbar, and don't rely on the HDMI ARC option (which worked well in our testing), the Android TV interface overlays really nicely.

For example, we had no sound lag when jumping from Netflix straight into a game of FIFA on the Xbox One.

The remote can't control everything, annoyingly, so you're still going to need to power down your TV and devices individually, but it's handy for asking Google a quick question when, for example, on the Nintendo Switch.

We enjoyed having Android TV built into the Link Bar, on the whole, and its limitations aren't necessarily going to stand out to the average user, but there's an overwhelming feeling of, "cool, but why?" if you're hooking this up to a smart TV.

We detailed the sound specs of the device earlier, and, if you judge it against other soundbars or speakers, these help the Link Bar stack up as a standalone option.

There's no great depth to the sound modes past what you'll find through your TV settings, but the fact you can tweak the bass on the Android TV menus is handy - even if you do have to return to the menu to do so.

The 100 watt output means you'll get plenty of rich and clear sound, which can get seriously loud if you crank it past the 50% mark.

You'll lose some of that detail if you go much louder, naturally, but the overall sound outperforms the smaller Sonos Beam, from our testing.

However, as any soundbar would, it feels a little hollow without the backup of the SW10 subwoofer we mentioned earlier ŌĆō and it's a real grievance that the soundbar is available on both sides of the pond, but the subwoofer is US-only.

Sure, the bass is good enough for a standalone bar, but you're left wondering how good this package could be if the subwoofer was paired with it from the start, like with the similarly priced Polk Command Bar.

And if you're looking to take things a step further, well, you can't, as there's no way to add wired or wireless surround speakers.

So, essentially, it's good - and can amply become the best-sounding standalone speaker in your home - but it needs more money throwing at it in order to reach its full potential, which also isn't as high as rivals, due to the lack of surrounding audio support.

Amazon: JBL Link Bar
Buy Now $399.95
JBL Link Bar
The JBL Link Bar is a soundbar we've been dying to try, due to its ability to merge the worlds of Android TV and Google Assistant. However, despite the hubbub, there's a lack of refinement that clouds the experience. The Assistant really struggles, and the perk of having Android TV feels like a hollow bonus when you can just buy a better separate device for the platform. Some of these issues are likely to be resolved through software updates, but, until then, you're probably better off with Sonos or Polk.
PROS
CONS