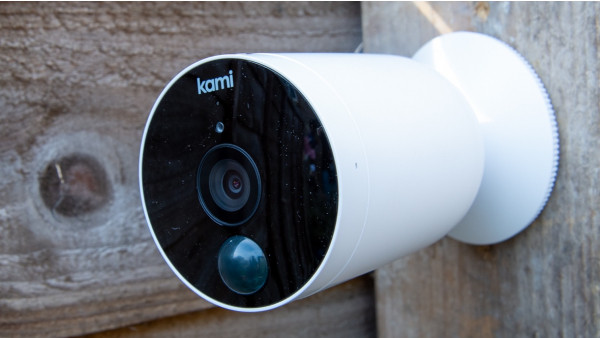 The Ambient is reader-powered. If you click through using links on the site, we may earn an affiliate commission. Learn more
David Ludlow
@daveludlow
Friday

While you'd get more features and a much better performance with the big names - such as the Arlo Pro 3 and Nest Cam IQ Outdoor, they cost a lot more.

The best alternatives around and below the price of the Kami include the likes of the Eufy Indoor Cam 2K, the Blink Mini and the TP-Link Kasa Spot. And you'd get 4K recording with the Reolink 810A for roughly the same cost.

Clearly a more budget smart home device then, the Kami Battery Outdoor Camera has a few limitations and compromises that make it a better choice for occasional use.

Here's what you can expect...

Price when reviewed
$89.99
Buy on Amazon

A lozenge-shaped beast of a camera, the Kami Wire-Free is far bigger than most of its battery-powered smart home camera rivals. In particular, itŌĆÖs extremely long.

Unscrew the camera from its IP65 weatherproof housing, and the reason for added bulk is clear: this camera uses four rechargeable 18650 batteries rather than a single rechargeable battery pack.

Not particularly common, 18650 batteries are little like long and fat AA batteries. Each cell needs to be charged in an external charger, which isnŌĆÖt provided in the box. You should get around 6 month between each charge.

For the first camera you buy, then, youŌĆÖll need to factor in around $20 to buy a suitable charger. It would have made more sense if Kami had included a USB charging point on the camera.

Fiddly batteries aside, the camera itself looks neat. It comes with the housing attached to a ball joint, which in turn attaches to the provided wall plate. Held in by three screws, itŌĆÖs a quick DIY job to get this camera installed and pointing where you want it.

ThereŌĆÖs a 1080p sensor inside with 140-degree FOV, so youŌĆÖve got enough of a wide-angle lens to capture large outdoor areas.

The configuration is simple, with the Kami app taking you through a simple wizard to get the camera connected to your Wi-Fi network (2.4GHz only).

Basic is the best way of describing the Kami Battery Outdoor Camera. Fire up the app and you can tap a camera to view its live feed. You can select the image quality, dropping down to SD if you want to save bandwidth.

ThereŌĆÖs also basic two-way chat, with the camera loud and clear enough for people to hear you, and the microphone good enough to relay the conversation back to your smartphone.

As is common for wireless cameras, the Kami Outdoor Camera used a PIR motion sensor to detect movement. Once this is activated, the main camera wakes up and starts recording video.

A big problem with PIR sensors is that theyŌĆÖre triggered by any movement and itŌĆÖs harder to restrict when a camera records. As such, the Kami Wire-Free should be pointed away from areas where thereŌĆÖll be lots of motion, such as a busy street outside your home.

Beyond physical positioning, there are very few controls for limiting the number of recordings that you get.

ThereŌĆÖs a simple slider that lets you select how often notifications will come (low, medium or high), but thatŌĆÖs it: you donŌĆÖt get activity zones, and you canŌĆÖt control the motion-sensing distance or sensitivity.

Using the Home/Away setting on the appŌĆÖs home screen, you can choose when your camera will and wonŌĆÖt record at the tap of a button. You can also set up a schedule for when a camera is active.

Footage can be recorded to a microSD card inserted into the camera. You canŌĆÖt view this footage using the app and have to remove the card instead.

While a microSD card gives you free storage it does mean that if the camera is stolen, your vital footage has gone too. We think that the SD card option is a good backup in case of internet problems.

ThereŌĆÖs the option for cloud recording via a subscription, but watch out where you subscribe from. Use the app and you only get subscription options for up to five cameras, which starts at $74.99 a month for 7-day history; go online, and you can subscribe for $40 a year for a single camera for the same video history. Just be careful where you subscribe to get the best deal.

Amazon Alexa and Google Assistant Skills let you stream the video footage directly to a smart display, which can be handy.

Although the Kami Outdoor Camera records at 1080p, thereŌĆÖs some fairly heavy compression that sucks the detail out of the image.

During the day, when thereŌĆÖs lots of light, the camera produces rather lacklustre, stuttery, images, with all of the fine detail gone, particularly in the distance.

Even close up, image quality leaves a lot to be desired and finer details on peopleŌĆÖs faces are smoothed out. Sure, you can see whatŌĆÖs going on but this camera lacks the sharpness that weŌĆÖd expect from a Full HD model.

At night, the camera switches to black and white, turning on its IR LEDs to light up the night. IR LED range is very good, but the picture gets even softer, making it even harder to work out individuals.

On the one hand, the Kami Outdoor Camera seems very cheap, but factor in the cost of a charger and the price isnŌĆÖt quite as competitive, particularly when the similarly-priced Reolink Argus Pro has a battery that can be charged via USB.

Kami Outdoor Battery Camera
A cheap and basic wireless camera, the Kami Battery Outdoor Camera gets the basics right for simple monitoring of your outside. The low price comes with several corners cut, including the lack of a battery charger, few controls for managing motion recording and heavy compression on video. If you only care about the basics it does the job but there are better alternatives.
PROS
CONS
TAGGED    security cameras