Is the two-in-one a worthy Show Mode device? 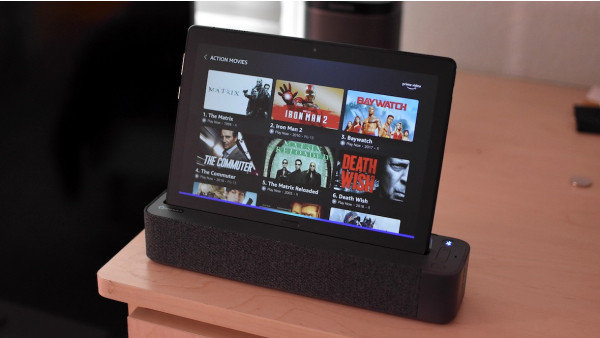 The Echo Show and Echo Spot are Amazon's flagship Show devices, giving Alexa some visual powers that make it good for using in the kitchen.

The company, however, also debuted Show Mode, which turns Fire Tablets into portable Echo Shows. They even come with docks, but they aren't the greatest experience. Lenovo is hoping to do it one better with the Lenovo Smart Tab with Alexa.

It's a two-in-one tablet that operates as both a regular tablet and an Echo Show by docking into a speaker that also keeps the tablet charged. But does this two-in-one Show Mode tablet actually work, or is it too much hassle? We spent some time with the Lenovo Smart Tab to find out.

The Lenovo Smart Tab is a 10.1-inch tablet that docs into the Lenovo Smart Dock to activate Show Mode, which is how you use Alexa on an Echo Show or Fire Tablet. It's a gadget of two parts, and it certainly feels like it.

It all looks pretty great. The dock has a soft mesh to cover its four speakers, which have been tuned by Dolby, while the tablet has a glass front and back and slim metal case. It just looks futuristic and it can be fun to hold - when it's not slipping out of your hands. It also weighs 800g, which is much heavier than the 469g 10.5-inch iPad Pro.

The tablet portion is super slippery - I've been terrified of it falling through my fingers as I've been carrying it. In tablet mode, it's a standard Android Oreo tablet; it's pretty zippy and fast, and there's 64GB of storage to download movies and apps. You can watch movies on that 1920 x 1200 LCD 1080p display, which is pretty good but struggles with some light glare.

By the way, there are two versions of the Smart Tab. We reviewed the P10, which costs more and comes with a dual-glass design, fingerprint sensor, 4 front-facing speakers, a 5MP camera on the front, and an 8MP camera on the back.

The M10, on the other hand, has an aluminum back, 2 front-facing speakers, 16GB storage, a 2MP front-facing camera and a 5MP camera on the back. Both also have Pro versions that double the storage size and add a gig of RAM for $50 more. There are no real feature or Alexa differences between the models, just specs and materials.

Docking the Smart Tab can be a bit annoying. There's a connector at the bottom that links it to the dock, but it can be a tiny bit of trouble to get it lined up right. It'll charge the tablet and then activate the Bluetooth connection between the dock and the tablet, which is what activates Show Mode.

That connection makes using the Smart Tab a bit awkward. The tablet can be protected with either a fingerprint or passcode, and sometimes when you ask Alexa things you'll need to use your fingerprint or passcode to unlock it. For instance, when I asked to watch Jack Ryan on Amazon Prime Video for the first time, it tried to send me to the Google Play Store to download the Prime Video app. So I had to go up to the display and unlock it first, then wait for the Play Store to load, then download the app, then wait for Alexa to open it up. Annoying.

You can still use Alexa hands-free when the tablet isn't docked, but you don't get the same loud sound that you would if it were docked. The speakers here are actually pretty good, and if you've got this in your kitchen it would make for a good mini TV or video cookbook.

So what can the Smart Tab with Alexa actually do? There are a number of tablet features here. There's a kids mode that'll keep things rated G for them. There's also a way to set up family profiles so that you and other people in your home don't get exactly the same experience with the same apps and such.

But the star of the show here is Alexa, which does most of the things you expect when you're using a Show Mode device. You'll get your visual weather reports, which still look quite good, along with your video flash briefings and a scroll of tips and news stories. You just have to ask Alexa about each specific news story to learn more about it.

However, that's where this hybrid starts to get weak in the knees. I've already told you how asking Alexa to watch something on Prime Video began a chain reaction of necessary inputs. Some of the news reports you ask about will have Alexa telling you that you need to download the correlating app to watch the video. Again, annoying.

There also appears to be a weird glitch. If you use Alexa to watch something on an app, like Prime Video, and then ask for a regular Alexa function, like weather, all the visuals shrink. Normally, the weather stuff takes up a significant portion of the display. With this glitch, it shrinks to less than half. It's a strange thing, but it's corrected by undocking and docking the tablet. Lenovo says it's looking into the issue [Lenovo has since fixed the issue. In our re-testing, we were able to seamlessly switch from Prime Video to weather with no issues].

You're also not going to get Echo-exclusive features like video calling or messaging. Though this is a tablet with a front-facing camera, so you can just open up a video app yourself and get going.

Using Alexa for everyday things is still possible with the Smart Tab, but those small niggles make life a little more frustrating. Luckily, Alexa's response is actually pretty good. I haven't had a problem with Alexa hearing me, though I have had odd problems trying to enable confirmation sounds with the Alexa app.

But it's not a good Alexa experience. I'd much rather use Alexa on an Echo Show or Echo Spot, which provides a seamless experience where I don't have to worry about unlocking my device to download an app. At the end of my time with the Lenovo Smart Tab, I found myself looking forward to using my regular Echo Dot again, despite its lack of visuals.