LG's Meridian-powered smart speaker is all about that bass ŌĆō but are you? 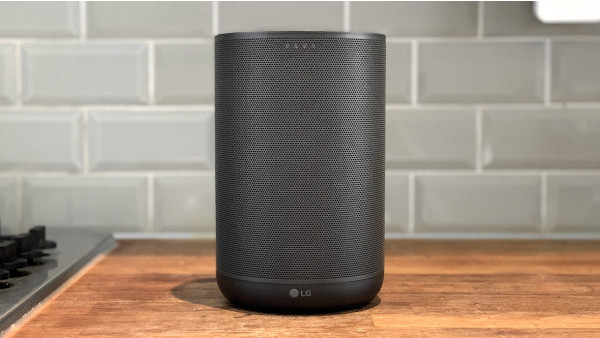 There's never been a better time to pick up a smart speaker, with the market booming and Google Assistant, Alexa and Siri making their way into more homes than ever.

The choice on offer is growing, and now it's LG's turn to put forward its case. The awkwardly-named LG ThinQ WK7 is the company's first foray into the space, and it's called upon Google's Assistant to bring the smarts and Meridian to boost the audio. Of course, we're also not far away from seeing the LG join the Smart Display range, too, with a crop of smart-first devices which ŌĆō you guessed it ŌĆō feature a screen.

Read this: The best devices with Google Assistant

At $200, the smart speaker is in direct competition with the likes of the Sonos One and the Harman Kardon Invoke, both which come in at the same price point. But is LG's attempt a worthy consideration, or one that fails to separate itself from the competition? We've been living with the device to find out.

Let's just say it straight up: it's hard to get the vapours about the design of the LG ThinQ WK7. Charcoal in colour, 8.3-inches tall and 5.3-inches wide, this is about as bog standard as it gets in the smart speaker crucible.

Looking like a sawn-off Apple HomePod, the ThinQ also carries a similar heft at 4.2 pounds. This does help give the speaker a more premium feel, however. On the top of the device are touch-sensitive markers that denote Google Assistant, pause/play, volume up, volume down and a big ol' "F", which stands for function. If you want to connect external Bluetooth devices, you'll be hitting that, while muting the speaker is done through a small button on the back.

Essential reading: Get Spotify on all your home speakers

Like many speakers of this ilk, you'll also be fixing it into one spot and plugging it in; there's no portability here. To aid you, there's a handy little carve-out on the bottom of the speaker to avoid the speaker sitting at an uneven angle, and the cable is long enough to let you rest it where you desire ŌĆō like a shelf, bookcase or kitchen worktop ŌĆō without too much trouble.

So, despite the ThinQ WK7 ticking the design box without really leaving a lasting impression, setup is a cinch thanks to the Google partnership. As we've come to expect, getting started through the Google Home app takes but a matter of minutes, providing you're already set up with your Gmail and integrations, such as Spotify. Even though the ThinQ isn't available in our testing territory, the UK, it didn't make a difference.

To sync things up, search for your speaker in the Devices section of the Home app and the two should begin shaking hands and connecting. As we say, it's all very straightforward if you've already spent time with the Google Home app, and you'll also be given the option to create a voice match profile and tell Google where the speaker will live, for ease of control.

For those wondering, the LG ThinQ WK7 can handle everything a Google Home speaker is able to, thanks to that built-in Assistant. That means users, should they have the ample tech, are able to control the likes of door locks, lights and cameras.

Obviously, the usual novelty tasks, like asking Google to tell you a joke, are here, as well as more functional requests, such as as asking for directions (via bus, tube or walk) or the weather. In typical Google fashion, the answers were detailed, and much better than those from Alexa. The last time I asked Alexa what the weather was like in east London, it gave me the forecast for somewhere in South Africa. There have been no similar, groan-worthy slips from Google Assistant when we've been playing around with the LG speaker.

That extends to voice recognition, too. I've crumbled under the pressure and messed up a request more than a couple of times, but Google has still found a way to provide the answer I was looking for. My partner ŌĆō who has a rocky relationship with Alexa as it is ŌĆō has also been converted to Assistant, after it was able to pick up her requests for music in the morning and facts to prove me wrong. The WK7 even does a great job of picking up your voice when music is blaring, keeping your audio running quietly in the background while you babble.

Now, that's not to say it's all perfect. You're still going to stump Google from time to time, and we really, really wish you still didn't have to start voice commands with "OK, Google" or "Hey, Google". Even just saying "Google" would be fine.

Another plus, though, is that we didn't experience any noticeable lag in responses, whether that was asking Google to restart a song or to turn on the bedroom lamp. The only real problem arises when you're controlling, say, Spotify, from your phone ŌĆō then there's a couple of seconds of catch-up time. But, in truth, we also had the same issues with the Amazon Echo Show that we compared the ThinQ against.

Of course, as we routinely detail, Alexa is still the all-powerful assistant when it comes to integrations and controlling your smart home. But if you're more interested in finding the better assistant to chat to, the WK7 does a great job of giving it a passage into your home.

When grading any speaker's sound quality, it's important to understand its place within the wider market. On the surface, this is LG's equivalent to the big dogs ŌĆō HomePod, Home Max and the Echo Sub ŌĆō but the price mark means that, actually, it isn't, and it isn't going to compete from a sound perspective. But to be honest, that's fine. For the $200 price tag, there are few speakers (if any) that can.

What you do get with the WK7, though, is bass ŌĆō buttery, biscuit bass. If you like your music booming at you, there's no doubt you'll be a fan of this speaker. However, after coming straight from the richer Sonos Play:1 and the safer, softer sounds of the Echo Plus, hearing the vocals and bass go this deep sometimes gave the impression that the speaker was delivering muffled sound. Get a bit of Barry White on, friends, and let him melt inside the speaker.

While it can dig deeper than the Sonos and other speakers we've tried, we're not actually sure it pulls it off all that convincingly a lot of the time. It'll still fill a room, and there's no sibilance, which is impressive considering its size, but don't be surprised if you feel like some of the mid-range sound is being flattened on occasions, and the treble killed off to the point where some songs are unrecognisable.

What helps is that the WK7 is available to mix within your multi-room setup, meaning you can easily ping your tunes over to different areas of the home. However, despite the Chromecast support coming built in, be aware that there's no AUX port.

Again, for the price, these are likely issues that you're going to be okay with. They certainly aren't deal-breakers, in our minds ŌĆō it's really more about adjusting to a different sound and some hardware limitations compared to what you may be used to. All in all, when the package is put together, LG and Meridian have delivered a sound that can amply handle bass and deliver a rich experience. But for those who aren't all about the bass, it's worth at least exploring other options in this price range.

LG ThinQ WK7
LG's debut effort may not have delivered a design that will neatly blend into your home, but it does make up for those so-so looks with help from Google and Meridian. The former's smart assistant is a star performer here, making this a legitimately strong option as the conductor of your smart home, while the sound delivered by Meridian is impressive, considering the price bracket the speakers sits in. It won't be for everyone, but the ThinQ WK7 is worth your attention.
PROS
CONS
TAGGED    speakers