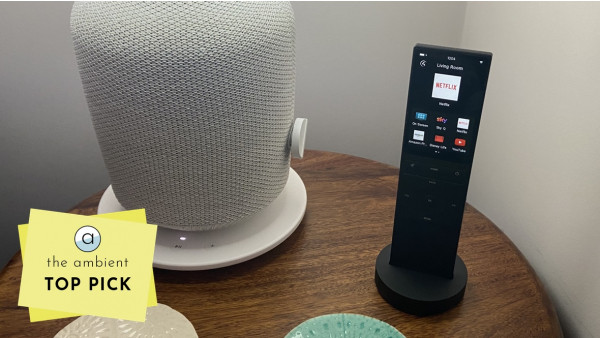 Back in February 2019, Control4 acquired Neeo; the makers of a universal remote control that was originally a huge Kickstarter hit. At the tail-end of last year, that remote was reborn as the Neeo Remote for Control4.

This wasn't simply a rebranding exercise. Control4 has essentially taken everything that was already great about the Neeo Remote - i.e. its ability to control a multitude of devices within the home, while looking pretty darn swish at the same time - and configured it to work seamlessly with Control4's latest Smart Home OS 3 platform.

I've been living with the Neeo Remote for the last couple of months. Read on for my comprehensive verdict.

The Neeo Remote is a far, far cry from the SR-260 remote control (pictured side-by-side, above), which Control4 users have been using since 2015.

I'll offer up a quick disclaimer right here that I actually love my slighty-clunky-and-ancient-looking SR-260, but I was definitely keen for Control4 to arm with a controller that is much more in line with what you'd imagine a high-end AV and automation system to boast.

The Neeo Remote certainly does't disappoint on that front. The machined aluminum finish, that comes in either black or silver, looks incredibly premium and, at just 9.2mm thick, it's also fantastically svelte. It's around 7 inches long and just under 2 inches across.

Up top is a 3.2-inch, edge-to-edge, 800 x 480 LCD display; that's a resolution with a 291ppi density and is certainly sharp and bright enough. My only concern with the display is, like a smartphone, it is prone to getting a little smudgy with fingerprints. That display kicks in as soon as you lift the remote - and its contents are dependent on what action you are carrying out - but more on that in a bit.

Down the bottom are the only physical controls of the Neeo, a selection of "frequently used" rubberised buttons that offer up the basics: channel up/down, volume up/down, power, mute, home, menu, select, back and a d-pad for navigation.

Flip it over and you'll feel the silicon back plate, which covers the sides, too. Not only does this material make the Neeo non-slip when it's sitting on a coffee table or the arm of your sofa; but it's also incredibly comfortable to use.

The muscle memory of holding the Neeo and knowing exactly where those physical buttons were only took a day or so to kick in.

This is a biggie, and somewhat of a unique treat for Control4 users: the Neeo Remote works straight out of the box. Users simply have to sync up their home Wi-Fi details (2.4GHz only) to the Neeo Remote and it will find the Control4 system it's set to control.

No dealer appointments, no messing around with the Composer Pro software, and no waiting around - you get to play with your new controller straight away.

The setup itself is an absolute cinch. It also automatically pulls in favorites from your OS 3 settings, once you tell it the room you're going to use it in the most. It automatically orders the icons of your media services - think Netflix, Prime Video, Hulu, HBO, YouTube and the like - from the order that you set from the Control4 app on your smartphone or tablet, or from a Control4 touch panel.

While there is no need to involve your Control4 dealer, you can get up to five custom scenes and shortcuts set by them to display on the touchscreen. Dealers can also make a few other tweaks, such as disabling the 'room-off' confirmation fail-safe that pops up when you press that power button; or locking the remote to only work with a specific room.

Neeo Remote for Control4: In everyday use

While the SR-260 is, first and foremost, a remote control that specializes in TV navigation (and dabbles in a bit of audio and smart home control on the side), the Neeo Remote is a master of many trades.

It works superbly as the main controller for your TV setup, but is also great at adjusting lighting and setting smart home scenes. As a music playback companion, it also excels; with album art, track information and much more all available at your fingertips.

I never, ever, use my SR-260 to change the lights in my house, or initiate multi-room audio. It's just a bit too cumbersome. That's certainly not the case with the Neeo Remote, where it's easy to swipe between rooms on the touchscreen, or easily jump between different control modes.

However, that doesn't mean it trumps the trusty old SR-260 in every department. The limited physical buttons at the bottom are perfect for basic controls within apps like Netflix and Prime Video where, let's face it, you only ever really scroll through on-screen menus and use very few physical buttons.

For cable or satellite TV, though, the lack of a number dial pad (a physical one, at least - a digital one is displayed if you scroll through the touchscreen) means you'll have to get used to a new way of navigating your everyday TV. You are able to program your favorite channels as icons for the display, and there are deeper integrations with TV guides and the like, but it's just not as easy as typing in those channel numbers that have been hard-wired into your brain over the years.

As mentioned, you do get digital versions of the physical buttons you are missing on the touchscreen. On most apps, the basics like play/pause, forward/back and stop are all on the first screen, with additional buttons presented if you swipe left and right.

Like I said, on most modern streaming apps, this is a perfect setup where less is definitely more. The lack of buttons is, therefore, both a plus and a minus.

One area where the Neeo Remote, and indeed the SR-260, falls down is voice controls. Most TVs now will have Alexa or the Google Assistant baked in, and you can talk to them - ask for shows, fire up apps, control the volume and so on - using a microphone built into the remote control.

There's none of this with Control4's remotes. So, even if your TV offers these voice assistants, you'll have to give them up if you decide to ditch the native remote controls (which is, kind of, the idea of a universal remote)

As I said, though, it's not just for controlling your TV and streaming services - you can also use it to control your smart home scenes, multi-room audio and a whole lot more. You can easily jump from, watching Netflix in the living room, to choosing a playlist in the kitchen, while at the same time adjusting the downstairs lighting. It feels natural, just like having a streamlined version of the Smart Home OS 3 smartphone app in your hand.

The Neeo Remote for Control4 comes with a charging dock, and you'll get up to five days of use from a single charge. That's the official word, at least. I haven't verified this as, like most people would (I imagine), I charge the remote every night in that magnetic, weighted dock.

Whereas the SR-260's charging dock is a bit of an eyesore, which we keep hidden out of view only to be used when needed, the Neeo dock sits proudly in the living room. Swiss designed indeed; there's no way I'm hiding it.

Unlike the original Neeo though, which had a replaceable battery, the Control4 flavor is sealed shut. Time will tell, therefore, how many years you're likely to get from it before it needs changing.

It's also worth noting that the original - the non-Control4 version - Neeo Remote cost $369, so, at $600, it's a pretty hefty mark up. It's also much more expensive than the standard SR-260 remote, and infinitely more expensive than just controlling things from your smartphone or touch panels.

However, it is awesome. It's the most intuitive, slickest way of controlling a Control4 system. And I've no doubt that Control4 users will be happy to pay that premium. It's actually a shame that it's limited to just Control4 users.

Neeo was an open platform before the acquisition and the success of Logitech's Harmony Elite proves there's a thirsty market for multifunctional smart home remote controls. And, in terms of looks and ease of use, the Harmony is nowhere near the Neeo Remote.

Control4 could, in theory, use the Neeo as a gateway drug to its all singing, all dancing smart home automation system. Let people use it outside of the walled garden and get a taste for the premium experience. Just a thought.

Neeo Remote
The Neeo Remote is, without doubt, the best way of controlling the AV aspects of a Control4 system, and it does a pretty good job of the smart home functions too. Sure, it compromises on the 'complete' control that the button-packed SR-260 provides, but its minimalist approach is perfect for modern streaming video and audio apps. The design is superb, it's incredibly comfortable to use and it works straight out of the box. Yes, it's expensive... but this is Control4, what did you expect?
PROS
CONS
TAGGED    smart home