Is this big smart home collaboration worth it? 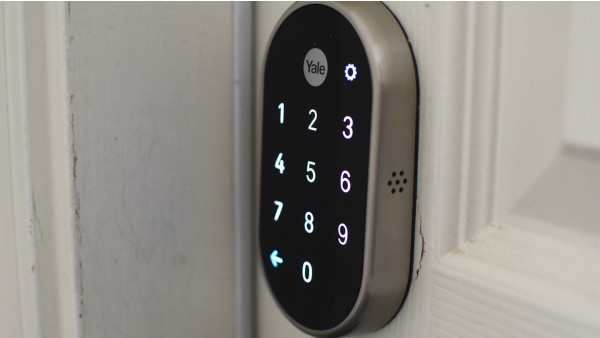 Nest has made major strides in the past year, going from the creator of the beloved Learning Thermostat to standing behind a wide variety of smart home products.

While the company has, for the most part, created these devices on its own, it decided to turn to lock expert Yale for its smart lock. The Nest x Yale smart lock is a collaboration, and it's meant to work in tangent with the Nest Secure security system and Nest Hello doorbell.

Can this collab measure up to the big name in smart locks, August, or is it one big, stinking disappointment? We've had the Nest x Yale Lock installed on our door for a while now, and we're ready to strike down with a verdict.

In the wider world of Nest's smart home products, the Nest x Yale Lock doesn't fit in. It looks much more like a Yale product than one belonging to smart home company. You won't even find a Nest logo here, just a Yale one. From the jump, it's clear this Yale's hardware and Nest's software forming the collaboration.

The lock is actually two parts, one on either side of the door, unlike the August Smart Lock Pro, which just sits on the inside. The outside bit is the keypad. You'll be able to tap that Yale logo to use the one-touch lock feature and there's also a 9-digit keypad that lets you input your code.

There is no space for your keys, so if you want the option of opening the door by the traditional method you're out of luck. If your lock runs out of battery and you need to unlock it, you can use a 9V battery to charge it from the outside, giving it temporary power and letting you input your code.

On the outside, the Yale lock is actually fairly good looking. It has a modern design, though it can be a bit fiddly to use that touchpad. You just have to press the Yale logo to bring up the touchpad. However, it's extremely tempting to instead touch the big touch area below that to activate the keypad ŌĆō and you certainly can, but it's not as consistent as touching the Yale logo itself. Weird.

On the inside, the Nest x Yale looks like a large, tall deadbolt. It's not the most attractive thing in the world on the inside, but it looks fine. Most of that space is reserved for the batteries, four AAs that you'll have to replace every year or so.

The Nest x Yale Lock is well designed. Most importantly, it doesn't look like a bulky hulk on your door, as its profile is still fairly svelte and attractive.

For the most seamless installation possible, Nest is always wanting to push its Nest Pros, local smart home installation experts that have been certified by the company. It turned out my door needed some work to get the Nest x Yale Lock fitted, so I opted for the experts.

Firstly, my door previously featured a singular backplate. On the outside, my door's lock and handle appeared to be separate entities. On the inside, they were apart of the same setup. That meant that to install the Nest x Yale Lock, which is just a deadbolt, I'd need to rip that out and install a new handle in addition to the lock.

Then, I found out that the Nest x Yale was too big to fit into the existing lock hole. So my Nest Pro had to go out and get some tools to make the hole slightly bigger, so that it would fit. Great stuff, except that if I ever get rid of the Nest x Yale lock, or have to use a lock that's a smaller size I may have to get a new door.

Other than the backplate removal and making the lock hole bigger, installation was a breeze. One thing you'll need to note during setup: If you've got a Nest Secure alarm system, you won't need the Nest Connect to connect to your network and Nest app. The Nest x Yale Lock comes in multiple configurations depending on where you buy it from; some of them come with the Nest Connect and some don't.

The Connect adds $30 to your price, so it won't exactly break the bank on a lock that already costs $249, but you will need it if you don't already have the Secure, so it's a cost you must factor in.

Actually hooking the Nest x Yale up with the Nest app is a breeze. You scan a QR code and then the app walks you through unlocking and locking the lock for the first time. You'll also have to create a four-digit pin to unlock the door.

If you're going to go with a Nest Pro, be prepared to pay a couple of hundred dollars. While Nest paid for the installation in my case, the costs came to $232. That's including a new door handle. If you've got a suitable door and don't have a door with a backplate lock, you should be able to get away with installing the Nest x Yale yourself.

The Nest x Yale Lock is super easy to use. When you get to the door, you can do one of two things: Input your code or pull out the Nest app. When you're in the Nest companion app, you'll see your Nest Hello video feed up at the top if you've got a Nest Hello. Underneath that you'll see the status of your Nest Secure and Nest x Yale Lock. If you click on the Lock, you'll be taken to a screen that lets you either lock or unlock the door by holding the big button.

I tend to prefer pulling out the app and unlocking the door as I walk up to it; that way I can just open the door when I get up to it. I'm saving all kinds of time not having to pull out my keys and what not. However, I did wish that the lock had a GPS unlock feature, like the August Smart Lock Pro. If only it could sense that I was approaching and unlock the door automatically.

Other than locking and unlocking on command, other smart features include automatically locking the door after a certain amount of time. I've set mine up for 5 minutes, but you can also configure it for 10 seconds and a minute. As a part of Nest's Home/Away Assist feature, you can also choose whether auto-lock is enabled when you're home, away or both.

The other big smart feature is a collaboration with Nest Secure. When you come home and unlock the Nest x Yale Lock, you can also turn off your Nest Secure at the same time. This saves you having to unlock your lock and then turn off your alarm. One action, two results.

The final bit of smarts is the ability to create a guest code. Should you rent out your place on AirBnB or need a friend or family member to come over while you're away, you can create a specific code for them to use. You can also set the time for that code to be active. So you can have the code expire when Monday rolls around and you want those AirBnB guests to vanish.

While the Nest x Yale Lock is definitely smart, it also feels like it could be smarter. There is no function here with Google Assistant, for instance. It would be such a dream if you could use Assistant to at least lock your door at night, but you can't. It's understandable that using a voice-based assistant to unlock a door might be a security risk, but locking the door at least seems like a safe bet.

There's kind of an overlap between the Hello doorbell and the Lock, as when you're in the Nest app it's pretty easy to answer the door and then unlock the door, but it could be even tighter. You have to get out of the video feed, head to the Lock section of the app and unlock it there. I wish there was a prompt in the video feed that allowed you to unlock the door right away.

The best thing about everyday use with the Nest x Yale Lock is that it never failed. The Nest app is a consistent performer, with very little crashes and slowdown. When I needed to unlock the door, the door unlocked. When I needed to lock it, it locked. When I was away, it locked itself up. There was not a moment where I lost trust in the lock and feared my home was unguarded. In fact, I got so confident I left the door handle unlocked for portions of the review.

The Nest x Yale is also smaller, and provides a cooler solution on the outside of the door. The August Smart Lock Pro still has a key-based lock on the outside. The Nest x Yale is also a better option than many of the other smart lock offerings out there, like the Friday and Kwikset. It's smarter than both and offers far better performance and reliability. When you're dealing with a lock to your home, you need something solid and reliable, and the Nest x Yale delivers.