An awesome, if somewhat expensive, way to give your TV a colorful boost 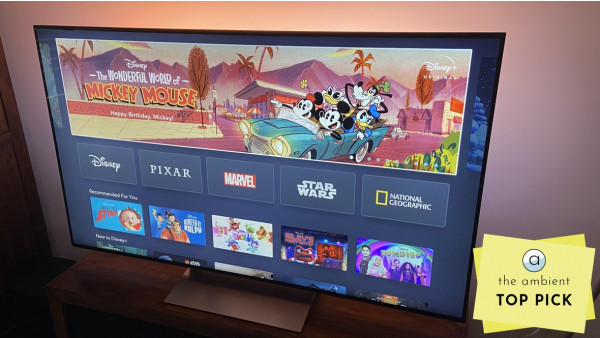 The Gradient Lightstrip is the latest device designed with the awesome Philips Hue Play Sync Box in mind; a new system from Hue that gives your TV a colorful supercharge that you never even knew it needed.

The idea behind the Hue Play Sync system is for you to get your Hue smart lights in sync with any content on your TV screen, as long as it's piped in through an HDMI cable.

There were already Play Sync-specific lights on sale such as the Hue Play light bars but the Gradient Lightstrip is by far the most simple, and I'd argue best, way to get in on the action.

Yes, you can get all your Hue bulbs and lights in a whole room in sync with a movie - as seen here in our demo video - but, for me, the experience of having the light behind and around the screen is a far more natural and immersive experience.

It's the reason that Philips' Ambilight TVs are so popular.... although we should point out that Hue and Ambilight aren't officially connected. But you get the idea.

Philips Hue Play Gradient Lightstrip: What you need and what it costs

Firstly we should deal with the matter of the slightly ambiguous price of the Gradient Lightstrip.

The Hue Gradient itself comes in three different sizes and is priced as follows:

The trouble is, if youŌĆÖre not already a Hue smart light user, you'll need a Hue Bridge; that's another $59.99.

You'll then need the $229.99 Sync Box to fire up the Play Gradient Lightstrip.

So, yes, it's a pricey setup but it's by far the simplest way of making the most of the Sync Box which, previously, relied on an array of smart lights around your TV.

I know what you're thinking - why can't you use the regular (and much cheaper) Philips Hue lightstrips given that the Sync Box could partner up with those?

Unlike the usual lightstrips, which all have to be set to the same color, the Gradient is capable of mixing up the shades and colors thanks to a series of individually addressable LEDs. Here's an image of them all firing different colours at the back of a TV:

You can save money if you're planning on using the Gradient with your PC monitor setup, though, as you can actually use it without the Sync Box as Signify has a Philips Hue Sync app that uses your computer for the ambilight processing power.

Setting up the Hue Gradient is very, very easy. IŌĆÖll be honest, IŌĆÖd put off doing it for a bit as I thought it was going to be an absolute faff - but it really wasnŌĆÖt.

The Gradient lightstrip itself is a flexible, curved, rubbery device and, as mentioned, it comes in sizes designed for TVs from 55 to 85-inch TVs.

The first thing you do is pair the Gradient to your Hue system as you would a regular Hue bulb, through the light setup process within the Hue app. Once paired the app will give you a step by step to adding it to a Hue Play Sync Box and also walk you through attaching the light to your TV.

The latter is simply a case of popping a middle holding bracket behind your TV (it has a sticky pad already attached) - up the top and centered - and lining up the arrows on the lightstrip to make sure you've got it in the right place.

You then add the corner sections on either side and the lightstrip simply clicks into place:

Finally, there are brackets for the ends of the lightstrip to hold it all in place.

On the left hand side you plug it in and the power box also has a sticky pad on it so as you can attach it neatly to to the back of your TV. Well, not as neatly as all my cables currently hidden behind my TV's back panels but nevermind:

The whole process, on my 65-inch Sony TV, took less than 10 minutes. And that was with 2 and 4 year-old assistants 'helping'.

Setting up the Hue Sync box could be classified as ŌĆśfaffŌĆÖ and does require some effort, especially if you plan on using it as a HDMI switcher for multiple sources. But it is also possible, thanks to the plethora of great streaming devices, which pack multiple streaming platforms into a single HDMI input, to keep this part of the setup hassle-free as well.

In my case I simply opted to use just one of the SyncŌĆÖs inputs (ports 2 and 4 are the ones you want if you want to make use of Dolby Vision, HDR10 and all that jazz, by the way).

Into the box I plugged an Apple TV 4K, thus giving me the likes of Netflix, Prime Video, YouTube, Disney+ and a whole lot more, without having to concern myself with switching inputs based on what we want to watch.

ItŌĆÖs an Apple TV box that I was already using, going direct into my Sony TVŌĆÖs Dolby Vision friendly HDMI port. This meant I was able to simply swap the existing HDMI lead to the 'output' on the Sync Box and then use a small HDMI cable between the Apple TV and the Hue box.

I won't bog you down with the technical specifics and settings of the Hue Sync Box itself - you can take a read of our review of that if you want to know more on that side.

Once you're all physically setup you just need to create an 'Entertainment Zone' within the Hue app. Again, for more details on that read our Hue Sync Box review; the long and short of it is that with the Gradient it's very straightforward as you're only adding the one light to the setup (you can add more if you want at any time).

Annoyingly, you need to use a different Hue Sync app, it doesn't all live within the normal Hue app. However, you don't actually have to use the app after the initial setup; you can set the Sync Box to automatically switch when an HDMI-connected device powers on, when a video signal is detected, or a USB power state changes.

In our Sync Box review we said that watching regular TV - such as news and sports - wasn't a great experience and that anything with ads in just becomes really jarring and bright, even on the subtle setting.

That's the main reason I set up the Gradient and Sync Box to just work with my Apple TV... it's just for movie time (or box set time, or kids watching crap on Netflix time).

It really is excellent, it's as if it makes the screen bigger somehow and the action is a lot more immersive. The TV looks smaller once you turn it off.

It emulates the colors on the screen brilliantly, shifting around behind the TV in time with the visuals and lighting effects of the movie seamlessly, with little if any lag. The lights dance, change color, flash, dim and brighten in perfect harmony with what's on the screen.

Unlike our main review of the Sync Box, where we had it set up with numerous smart lamps and bulbs in a room - and found it to be overkill sometimes - the Gradient is subtle enough to make a dramatic difference to the movie watching experience, without it ever being too much.

Voice commands you can use include starting/stoping light sync, switching inputs, changing modes, switching intensity and adjusting brightness. The good news is all of these settings show up within your voice assistant apps and can therefore be incorporated into routines and automations.

This allowed me to set up a great Alexa Routine which kick starts the Sync Box, turns the Gradient on at my required brightness and intensity, and also fires up my IP-powered TV to the correct HDMI input:

Not that it's a major selling point but the Gradient Lightstrip does act like a regular Hue bulb when it's not singing and dancing with your TV.

It makes for a decent mood light when you're not watching TV, for example.

Philips Hue Play Gradient Lightstrip
Yes, it's expensive (for the whole system) and yes it's somewhat of a novelty that you don't need. But you also don't 'need' Dolby Vision, Dolby Atmos, rear speakers, a subwoofer and all the other things that millions of people add to their home AV setups to maximise the experience. The Gradient is a super simple way to boost movie time at home and is just so much fun to use. It's not something you have to get used to, nor is it something that anyone in my household was put off by... it feels natural and the initial wow-moment when watching a blockbuster with all the lights firing is well worth the outlay... probably.
PROS
CONS