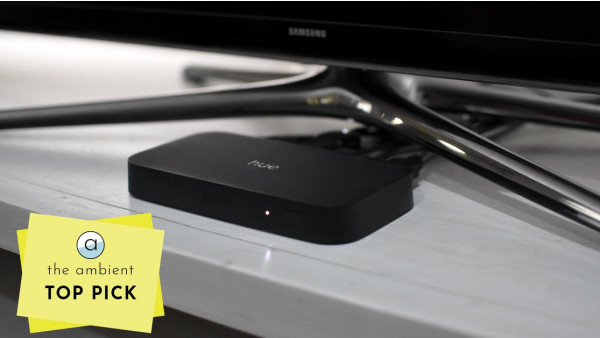 Color-changing smart bulbs are lots of fun, but if we're honest it can be hard to find a really good reason why you have to have them. Signify, makers of the Hue lighting line, has the answer: "Surround lighting." Think surround sound but for your smart lights.

With the newly updated Philips Hue Play HDMI Sync Box you can get your smart lights to sync with any content on your television screen - as long as it's piped in through an HDMI cable.

Plug this small, sleek box into your TV, sync it up with your Hue lights and sit back and enjoy the home theater/immersive gaming experience of your dreams as your lights magically sync with everything from The Avengers to Peppa Pig.

With no lag and the ability to fine tune how your lights respond, from subtle to intense, this is the light syncing experience serious home theater geeks have been wishing for. Plus, it's ridiculously simple to set up and install (unlike the desktop PC version of Hue Sync) and easy to control and use thanks to a new IR remote feature and voice control with Alexa, Siri, and Google Assistant.

As with all things Hue, however, it's not cheap. The box itself is ┬Ż299 and to get the most out of it you're really going to want a couple of those Hue Play light bars that are designed to be set up around your TV screen, which will set you back ┬Ż120.

Of course, you'll also need a Hue Bridge and ideally a number of other Hue bulbs or lights scattered around your living room to really create a light show extraordinaire. All in, you're looking at a ┬Ż500 investment. In the world of home theater however, that's pocket change.

We've been living the Hue Sync Box and a pair of Play light bars for 3 months, read on for our full review.

The Hue Sync box is a small, black box, about twice the size of an Apple TV. It's essentially an HDMI switcher, and works by being the command center for all your HDMI connected gadgets - so it can tell your lights what your TV is doing.

We plugged it in to the back of our Samsung TV using the HDMI out port and then plugged all our streaming boxes and dongles directly into the Sync Box's four HDMI 2.0b in ports. It's set to switch automatically based on which port is receiving power i.e. which set top box is turned on and streaming. (Note: It will only work with a device connected via HDMI, so you won't be able to use your Smart TVs built-in streaming apps with it).

Besides the HDMI ports at the back there's also a power port, and at the front there's an IR receiver and a physical button that turns the box on and off and can manually switch between HDMI ports. We set it up with an XBox One S, a Chromecast, a Fire TV and an Apple TV. But it will work with basically anything that uses an HDMI connection, including a Blu Ray Player or Roku device.

The trickier part is setting up the lights. The Sync Box is compatible with any Philips Hue white or color ambiance bulbs or fixtures, and Signify recommends pairing with its lightstrip, light bars, Go lamp and Signe table or floor lamps.

We tested the Sync Box with a pair of Play light bars. To install these you need to find a suitable spot alongside or behind your TV - they come with wall or table mounts and you can also attach them to the back of the TV. We did the latter using the included double-sided tape, positioning them about halfway up the TV set to reflect off the blank wall behind it.

Handily, both Play bars and Sync Box connect to the same power brick, which has receptacles for up to three light fixtures so you only have to find one empty slot on your likely already overloaded power strip.

We paired the lights to our Hue Bridge (V2 is required for using the Hue Sync Box) then downloaded the Hue Sync app to complete the setup. Using this app, which is separate from the main Hue app, we paired the box using Bluetooth, then connected it to Wi-Fi and then to the Hue Bridge. It sounds complicated, but it's just three screens in the app.

The app then sends you back to the main Hue app to set up the Entertainment Areas. These are groups you create with your lights to tell the box which to use when you start syncing (you can set up multiple areas). This is a fairly technical process that involves telling the app where the lights are situated in the room in relation to the TV and what height they're at (ground, TV height or ceiling).

It's all done on an interactive map of your living room and the lights you're positioning blink so you know you have the right ones. Finally, the lights blink in sync with the colors currently on your TV to show it's worked, and you can ask it to self-adjust if it's not quite right. You can use up to 10 lights per entertainment area and have multiple areas.

The Hue Sync Box synchronizes your lights with whatever is on your screen, and supports 4K, HDR10+ and Dolby Vision content, if your TV is capable. There are three modes Video, Music, and Game, and four levels of intensity Subtle, Moderate, High, and Extreme, you can also adjust the overall brightness.

The actual experience of using Sync is pretty freaking awesome

There is no remote because it automatically switches between inputs, assuming you have an HDMI-CEC compatible set (which, if your TV is less than 10 years old, you probably do). You can also press the button on the front to manually switch. An HDMI-ARC port lets you hook up any sound bar or you can enable an ARC bypass if you need to connect the Sync Box between an AV receiver and the TV.

The Hue Sync app gives you a ton of control and has lots of settings for tinkering with your setup, which is important as the box essentially takes over control of all your devices. You no longer have direct control through your regular remote. But with IR control (a feature just added this spring) you can use the Hue Sync app to reprogram your existing television remote or any smart remote you have.

Now, you can control the Sync Box without having to use the app - including switching it on or off, and changing inputs. You can also set it to automatically switch when an HDMI-connected device powers on, when a video signal is detected, or a USB power state changes - all pretty smart.

Another neat feature is the ability to have Hue Sync turn on automatically as soon as you turn on your TV, although as the Sync feature isn't great for watching regular shows like the news or sports, you might prefer the option to turn it on just when you're ready for a full-on entertainment experience.

Finally, there is voice control with Alexa, Google Assistant, and Siri (through Siri Shortcuts, there's no direct HomeKit compatibility with the Sync Box). Voice commands you can use include starting/stoping light sync, switching inputs, changing modes (from game to video), switching intensity, and adjusting brightness.

Hue Sync Box: In use

Once the Hue Sync Box is setup and you've got it all "synced up" with your lights and set-top boxes the actual experience of using Sync is pretty freaking awesome. Our first test movie was the World War I epic 1917, which to be fair didn't really need much added ambiance, but the Sync really delivered.

It emulated the colors on the screen, shifting around the room in time with the action and lighting effects of the movie totally seamlessly, there was no lag at all. The lights dance, change color, flash, dim and brighten in perfect harmony with what's on the screen.

However, in some scenarios the bright, flashing lights are really distracting. We found that depending on what we were watching, adjusting the intensity was essential. At the highest intensity you really notice the lights cutting in and out and whirling around you - good for The Avengers, but not so much for Little Women.

For less special-effects heavy movies, the moderate setting was a better option. We also set up a few entertainment areas, some with fewer lights - depending on how immersive and intense we wanted the movie watching experience to be.

Watching regular TV - such as news and sports - wasn't a great experience. Anything with ads in just becomes really jarring and bright, even on the subtle setting. For gaming on the other hand, the Sync box has become an essential accessory for the 12-year-old XBox aficionado in our household. He cranks it up to intense and says he loves how it feels he's actually in the Minecraft world or on the Fortnite field.

Initially, we found the separate apps a big pain, but once it's all set up you don't really need the Hue Sync app any more, as you can use your existing remote and voice control for everyday adjustments. We also like how once you turn Sync off it reverts your lights back to your chosen scene, rather than just leaving you in darkness.

So, do you need a Hue Sync Box? No, you don't need one, but you probably will want one. This is all about fun, not so much function, but this ┬Ż299 device definitely delivers that in spades.

But there are a couple scenarios where the Sync box just won't fit in your set up. Such as if you watch all your content directly through your TV, over the air or using apps on your smart TV, the Sync Box isn't for you. It works by intercepting a video signal running through the HDMI cable so it can't intercept anything natively on your TV.

Also, if you have a very elaborate, high-end AV set-up that already has an HDMI switcher involved and other similar workarounds, you might find it hard to integrate without having to totally redo everything. But it might well be worth that hassle.

Philips Hue Play HDMI Sync Box
So much fun. So expensive. But if you're really into home theater (and who isn't these days?) the Hue Sync Box is definitely a worthwhile upgrade. Signify has clearly put a lot of thought into this and addressed every likely scenario in the multiple settings in the app. Plus, if you're already heavily invested in the Hue ecosystem it's an easy upgrade. Consider it the equivalent of the 5 trips to the movies you won't be taking this summer.
PROS
CONS
TAGGED    smart lighting