The original may not be the best, but these upgrades make it better 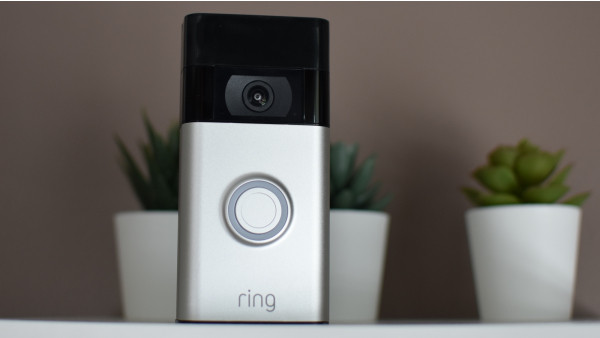 Doorbell cameras are getting really fancy. High quality 2K resolution, facial recognition, package detection... soon they'll be X-raying our Whole Foods delivery and making suggestions for supper. But what if you just want a great smart doorbell that shows you who's at your front door and lets you have a quick chat without costing a fortune? Ring's 2nd-gen video doorbell might be just what you're looking for.

The first refresh of Ring's OG doorbell since it debuted 6 years ago, the Rind 2nd gen promises better video (1080p HD), sharper night vision, and smarter motion zones. These upgrades bring it closer to its growing competition, but it's still the bottom of the line, and you feel that in a few ways.

Video quality still isn't great, there are fewer accessories (no included mounting wedges or faceplates) and there's still no removable battery, so you need to take the whole thing down to recharge it.

On the plus side, this does mean it's much smaller than the Ring Video Doorbell 3 (the next step up), and much cheaper - only $99.

Price when reviewed
$99.99
Buy on Amazon

Combined with all the recent improvements Ring has made to its app that have come to all its cameras - Snapshot Capture (to help with the lack of continuous video recording), People Only mode (to cut down on false alerts), the addition of Modes (so you can tailor when your doorbell records), and new privacy features (including customizable Privacy Zones) - this sub-$100 video doorbell is well worth considering.

We've been living with the "All New" Ring Video Doorbell for two weeks now, read on for our full review.

But first, which Ring is which?

Ring has been churning out doorbells like they're going out of style recently, so it's easy to get confused as to which one's which, which does what differently, and - most importantly - which one's right for you.

Here's a quick run down of the latest lineups. You'll see there's no Ring 2 anymore, it's been retired to make way for the Ring 3, and the entry level Ring is the second-generation Ring, not to be confused with the now discontinued Ring 2:

All the doorbells share the same 1080p HD video quality for live streaming (with the exception of the Pro 2), the same app, and many of the same features, some of which require subscribing to Ring Protect Plan to get. You'll also need to pay to view and access recorded video on any Ring doorbell.

The main differences come in how they are powered (built-in battery, removable battery or wired), their connectivity (2.4GHz, 5GHz or Ethernet), their design/form factor and some more advanced detection features on the higher-end models.

The first thing you notice about the design of the Ring 2nd-gen is how much slimmer it is than Ring 3 (the next step up). One of our main complaints about Ring 3 is how big and bulky it is - necessarily so to accommodate that one-size-fits all rechargeable battery. The Ring has a built-in battery giving it a more flattering form-factor, and although it's still too wide to fit comfortably on our doorjamb it doesn't stick out as far as its fatter sibling.

It comes in two colors, silver nickel and Venetian bronze (you have to choose up front, there's no swappable faceplates as with the other models) and with a newly redesigned mounting bracket that makes removing the doorbell to charge it a bit easier (although is still pain to have to do).

Otherwise, all the iconic Ring styling is here - glowing blue LED light ring around the button, Dalek-type top half that houses the all-seeing eye, and the now-familiar Ring chime when you press the nice, tactile button. It feels sturdy and looks good but isn't breaking any design boundaries.

As with all battery-powered Ring doorbells (except the unique Peephole), Ring 2nd-gen can be hardwired too - but it's not a hardwired doorbell, it simply uses the wiring to trickle charge the battery, so you'll be charging it less often. If you want a hardwired doorbell you'll need the Ring Pro.

When you do charge it, which you'll want to do fully before install, you use the included orange Ring charging cable and a USB port in the device.

Most everything you need for install is included - even a drill bit if you have to drill into brick or concrete. Whether hardwiring or not, you install the mount using the included screws and then either attach the wires to the screws on the back of doorbell or just pop it on the mount. You then use the included security screw and the other end of the Ring screwdriver to secure the doorbell to the mounting bracket, so no one can pinch it.

There are no wedge mounts included in the box, as there are with the Pro and the 3, but you can buy them separately if you find you need a different angle to get a good view of your doorway.

Another accessory worth considering is the Ring Solar Charger mounting bracket, which sits behind the doorbell and can charge it when in direct sunlight. We've not tested this device though, and online reviews indicate it really only works if it can get 6-8 hours of direct sunlight.

The big features here are the upgrades from the OG Ring doorbell. 720p HD live streaming is bumped up to 1080p HD, night vision gets sharper, audio is beefed up, and a new, closer motion zone is added. A redesigned mounting bracket rounds out the hardware changes, but some software improvements include the addition of Privacy Zones and compatibility with Ring's Modes feature.

The new motion zone adds in the area 5-15 feet in front of your door as its own zone. Previously you had three pie sliced areas to choose from, meaning you couldn't easily cut out action on a nearby sidewalk. This near zone helps limit the number of false alerts you get and paired with the People Only alert mode (a paid upgrade), it's entirely possible to only hear that distinctive Ring ringtone when there's a person at your door - and not just a cat wandering along or a car driving by.

Another paid upgrade is Snapshot Capture, which gives you the option to have the camera snap an image every hour, 14 minutes or 5 minutes (5 is only an option if it's wired or attached to the solar panel). This fills in your timeline with a peek into what's been going on between motion events.

For Snapshot and People Only mode you need to have the Ring Protect Plan, this also gets you the ability to view recorded video, otherwise you can only see a live view. It's $3 a month for one camera or $10 a month for all your cameras ($30 or $100 for a year).

Another software upgrade is extended recording length (you can now choose from 15 seconds up to 120 seconds), which also helps give the illusion you're getting continual surveillance of your property. But it's a bandaid answer to the lack of continuous video recording options on any Ring devices.

Privacy Zones come to the entry level Ring too, so you can block an area where you might be intruding on your neighbor's privacy if you're recording video, and you can also turn off audio recording for this same reason.

You can also include the doorbell in the app's Modes feature, where you can set all your cameras to turn off motion detection, video recording and/or live streaming when you're home, and then back on when you leave, all with a tap in the app. We'd like to see geofencing as an option here though.

Linked devices also work with this doorbell, allowing you to use its motion sensor to trigger any Ring-enabled lights or cameras to turn on or off, plus of course it integrates with Alexa so you can have it singing and dancing with the latest and greatest smart home devices.

You can have your Echo speakers announce when someone is at the door and automatically stream footage to any screen-enabled Alexa smart speaker or Fire TV. There's no HomeKit or Google Assistant integration, but it can pair to SmartThings, and you can also opt in to using Ring's somewhat controversial Neighbors neighborhood watch app.

The key job of a video doorbell is to send a quick alert when someone approaches your door or presses your doorbell. The Ring delivers well here, the alert came almost instantly and the video feed took about 6 to 8 seconds to show up on our phone and the Echo Show 8 we were testing it on.

While the video quality is 1080p, the same as all the other Ring doorbells, it's definitely not as bright or crisp. But it's fine for general viewing, and the zoom is okay.

The biggest potential issue here is no HDR, which helps in low light during the daytime. On our covered porch, where there's no light on visitors' faces and plenty of daylight behind them, faces were often in shadow and hard to see clearly.

HDR is an option on the 3 Plus and we were able to compare them side-by-side on the same motion event and the 3 Plus gave us a clearer, more colorful view of our FedEx driver's face, whereas the Ring was decidedly darker. If you have a covered entryway without a light source, this is definitely something to consider

We also compared the speed of the motion sensor in the Ring and the 3 Plus, with the former being slower to pick up on a visitor, getting them just before they rang the bell. The 3 Plus got them a few seconds before that, plus has a pre-roll feature that serves up 4 seconds of black and white video for additional context.

Where this matters is if you're worried about someone pinching something off your porch - as they'll be moving quickly. If you're just concerned about seeing legitimate visitors it's not so much of an issue.

The night vision has definitely improved over the original Ring doorbell, it's much crisper, and faces were recognizable without any additional light source. Zoom has not been improved however, and it still lags far behind most of the competition.

Field of view is 155 degrees. This give you a great wide view of your doorway, so you can see side-to side, but no view of the porch at all, not handy if you're concerned about package theft. You can buy an angled mounting bracket separately to get a bit more of a downward look if you need it.

Two-way audio is significantly improved, and once connected, visitors could hear and speak to us clearly and vice-versa, but there was the occasional choppiness. But to be fair, we get that with most doorbells we test.

The including mounting bracket does make removing the doorbell to charge it easier, but you will need to keep the Ring screwdriver handy as it has a proprietary screw. Ring says you'll need to charge it every 3 to 6 months. After 2 weeks of use ours was at 80%, so we're heading to right about 5 months before it needs to recharge.

Ring Video Doorbell 2nd-gen
It's a definite improvement on the original and at $100 less than the rest, the Ring 2nd gen is a bargain. But video quality and angle isn't great, there aren't any of the more innovative smart alerts found on most of the competition, and if your visitor is quick you might miss them. Get this if you just want to see and chat with people at your front door using your smartphone. If porch pirates are your biggest concern, there are better options.
PROS
CONS
TAGGED    security cameras    smart home    video doorbells