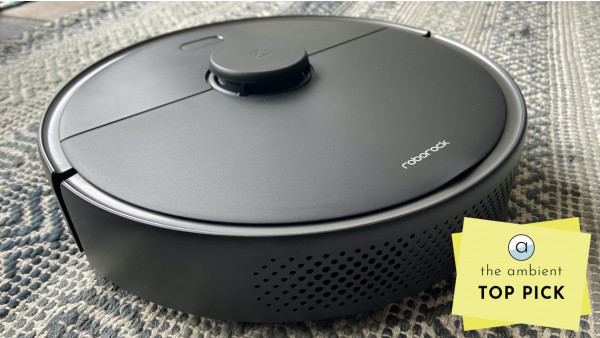 The Roborock S4 Max, the latest robot vacuum cleaner to come out of Roborock's seemingly-never-ending conveyor belt, has just gone on sale.

Taking things back to basics somewhat by omitting the mopping functionality that's found on the likes of the flagship S6 MaxV, the S6 Pure and the S5 Max, the S4 Max picks up where 2019's Roborock S4 left off - i.e. offering the high-end vacuuming we've come to expect from the Chinese brand but with a more affordable price-tag.

Compared to rival models from alternative brands, it's certainly in the lower-mid category of robot vacuum cleaners when it comes to cost.

However, there's nothing budget about the Roborock S4 Max at all. Read on to find out why Roborock has another Top Pick on its hands.

Roborock models all look pretty similar; never change a winning team and all that.

However, the S4 Max does have a few fresh touches that make it clear it's the newest member of the line-up. Around the top edge is a much more defined lip than we've seen on the past few launches and the matte finish (my review model was the black option) is nice.

But there's still nothing too radical here; no Neato style D-shape, no elongated brush, nothing like that.

In terms of physical controls on the S4 Max, it's similar to what came before with last year's S4 - just a power and a return-to-home button - although the layout of these controls is more in line with what we saw with the S6 Pure.

There's no spot clean button but, if you need a concentrated clean in a specific area, you can still initiate one using the Roborock smartphone app.

At less than 3-inches high, it's a round robo-cleaner design, with bumpers on the front, a sensor engine on the top, and a panel that houses those two physical buttons up top.

Flip the back panel open and you'll get access to the 460ml dust bin, which is slightly smaller than what you got with the older S5 and S6 models but is on par with the latest Roborock's. It's 40ml bigger than the S4 it replaces as well.

We have our S4 Max going at least once a day and the dust bin needs changing once a week or so.

On the bottom of the S4 Max you'll see 'Scratchsafe' floating main brush and a corner spinning brush. Roborock's components are all interchangeable, you can pick up 'better' main brushes and corner brush spares, plus new filters and dust bins super cheap online; especially if you shop on one of the Chinese e-retail stores like Gerabest.

Color-wise, as mentioned - my S4 Max model was a black finish and, at the moment, this is the only color available.

Like its more expensive stablemates the S4 Max comes with a wealth of sensors for navigation (as well as a dedicated CPU).

And it's this array of hardware components that make all the impressive mapping of rooms and routes possible.

Maps, zones and rooms is an area where Roborock really excels - we've said it in all previous reviews and we'll say it again now - there is no robot vacuum cleaner brand that gets near Roborock in terms of navigating a room.

That little circular turret on top of the S4 Max is the unit where the magic happens, in terms of mapping and tracking is done. It features an ultrasonic radar sensor, a cliff sensor, a gyroscope, an accelerometer, a speedometer, and an electronic compass.

It's all powered by by a quad-core 32-bit processor, with a simultaneous localization and mapping (SLAM) movement algorithm combining with the laser distance sensor (LSD). You might also see it referred to as LiDAR. The S4 Max's laser spins at 300RPM for an incredibly detailed mapping performance.

The S4 Max also features an Adaptive Route Algorithm to calculate the most efficient cleaning route based on a room's shape and in-room obstacles, so you'll actually find that it runs into trouble less frequently the more you use it, as it learns areas it needs to avoid.

As with its bigger siblings, the S4 Max is also capable of mapping different floors of your house. It can store four different levels so it knows how and where to clean wherever you put it.

The Roborock S4 Max has four suction modes; Quiet, Balanced, Turbo and Max. Stick to one of the top two options and the level of cleaning is superb.

Like the S5 Max, S6 and S6 Pure, it has a 2,000Pa suction rating - which is on a par with flagship devices of other robot cleaner brands - and there's also a Carpet Mode that increases suction power when it detects that it has gone from hard floor to a carpeted area or a rug.

In the Roborock range, it's only the flagship S6 MaxV that has more suction power at 2,500Pa.

As with other Roborock cleaners there is a speaker on board from which a voice tells you when it's starting a clean, going back to the dock, and it'll also give you a spoken error code if something does go wrong.

There are about 15 different voices to choose from, although there's only one English voice on offer..

Up until last year, Roborock cleaners lived within the Xiaomi Mi smart home app (Xiaomi is a shareholder of the company). And while they still can be synced up with Xiaomi's smart home platform there is now, thankfully, a much simpler Roborock app.

The S4 Max scans and maps your house's layout and provides incredibly accurate blueprints of your home. You can then use these maps to set virtual no-go zones around certain objects - think wires, pet bowls and the like - and you can also block out entire rooms that you don't want the S4 Max to venture into.

You can also draw custom areas on the map, simply by pinching and zooming a square over it, and create dedicated cleans. For example you could have the area around your sofa cleaned twice after you've had a family movie session and there's popcorn all over the carpet.

The S4 Max also has access to a feature that was originally introduced with the S6; selective room cleaning. Using the map the device has created, it will also attempt to decipher (with a pretty impressive hit rate) what the different rooms are on a plan.

The ground floor in my house has an open plan kitchen and dining room, so it had these grouped together as there are no narrow doorways to indicate a new room. However, I was able to manually split these rooms in the app, making it easier to do a dedicated individual room clean if needed.

As mentioned, the S4 Max is capable of recognizing up to four different floors and you can do all of the virtual barriers and room settings on each and every floor.

Amazon Alexa and Google Assistant integration is possible with the S4 Max, using the Roborock Plus skill (avoid the Roborock Home skill - I'm not even sure why it exists).

The setup isn't the greatest though; you are limited to just starting and stopping cleans - there's no return to dock voice command.

You can get the S4 Max to start as part of a Routine though - we have ours come on when it's time for the kids to have their bath at the end of the day, for example.

Despite its lower cost there's been no compromise to the battery on board. The S4 Max's 5200mAh battery will, on Quiet, give you 180 minutes of cleaning. I have mine set to Turbo - the highest - and it easily gets around my downstairs in around an hour, with plenty of juice left in the tank.

Roborock states that it is suitable for areas around 300 square meters.

However, one feature that it doesn't have compared to the likes of the S5 Max and the S6 Max is that it will not top-up its charge to complete a job - on those more expensive models they return to the dock when they are running out of power, get to 80% and pick up where they left off. You don't get that with the S4 Max.

Unless you've got a huge house though, that shouldn't ever be something you need to concern yourself with.

The Roborock app is great for telling you when you need to clean the sensors, brushes and filters. The filters are washable but, as mentioned, you can also buy spare ones cheaply online.

The app also tells you when to empty the dust bin, as does the on-board voice; and you'll also hear the S4 Max talking if it runs into trouble.

It's a bit noisier than both the S6 and S4, with a 69db noise rating - those had 67bd ratings. However, in the world of robo vacs, the S4 Max is in no way a noisy nuisance.

Roborock S4 Max
Buy on Amazon
Roborock S4 Max
Roborock's latest model is a fantastic option for anyone who isn't all that bothered about the mopping functionality of the more expensive cleaners in the range. In terms of vacuuming it's essentially on a par with the likes of the S5 Max and the S6 Pure and, with a sub $450 price-tag, it's a superb pound-for-pound option for anyone looking beyond the bargain basement models on offer in the ever expanding world of robot cleaners. Those 'cheap' devices are all well and good but you really need to spend a bit more for a comprehensive clean and the S4 hits the perfect sweet spot of price and performance.
PROS
CONS
TAGGED    robot vacuums