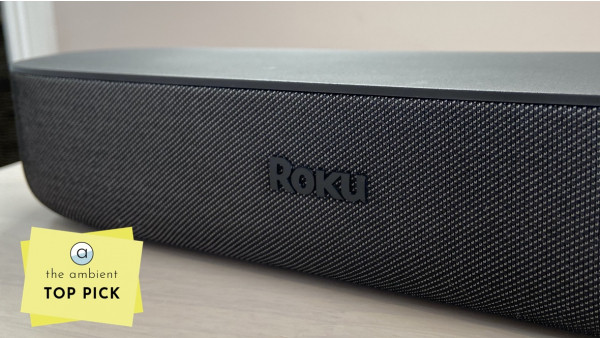 The Roku Streambar was revealed along with an upgraded Roku Ultra streaming box back in September.

The Streambar is a compact smart soundbar that comes is less than half the length of the company's previous TV speaker, the Smart Soundbar; 14 inches compared to 32.

Crucially, it's also a more affordable option that its stablemate, coming with a $129.99 price-tag - that's a $50 saving compared to the bigger option.

However, there's been no corner cutting with the smarts - the Roku Streambar is able to stream 4K HDR visuals from the likes of Netflix, Apple TV+ and Prime Video on 4K compatible TVs.

I've been living with the Roku Streambar for the past few weeks, read on to find out why it's a great option for smaller living rooms and, in my opinion, bedrooms.

The Roku Streambar is, as mentioned, a compact little speaker; measuring in at 14 x 4.2 x 2.4 inches. It's that 2.4-inch measurement that's likely to be the most crucial one to you; you don't want a situation whereby the top of the soundbar overlaps your TV's display - which could be an issue if you are planning on putting it on the same surface the TV sits on.

In terms of design, it's not going to win any beauty prizes but, on the other hand it's hardly going to be noticed at all, which is kind of the point.

Up front is a mesh black fabric covering the grille, with a little LED light to show the unit's status just above the Roku logo (which can be switched off entirely within the settings, should you wish).

On the back you'll find a minimal arrangement of ports and controls: a solitary HDMI port, a USB port, an optical cable port, the power socket and a reset button.

There's no Ethernet though, so for unchoppy 4K action you'll need to make sure you've got a decent Wi-Fi signal where you plan on putting it. You can, if you can foresee an issue here, use that USB port to put in an Ethernet adapater, but that's sold separately.

That HDMI port is the connection between your TV and your audio and visual smarts. Of course, as per a regular streaming stick, it puts an array of streaming platforms and apps (more on that in a bit) onto a single input on your TV but it can also make your non-Roku TV experience better, whether from a cable box or your smart TV platform's native apps.

That's because the Streambar boasts HDMI ARC - audio return channel. At least one HDMI port on your TV should have an ARC label, whereby it will be able to pass back audio from any source back through the soundbar. So, it's not just the Roku apps that use the Streambar's speaker.

The Roku remote is small, comfortable to hold and has a groove in the back that's perfectly placed for your index finger. Its buttons are responsive and, in addition to controlling volume, the Roku remote can also be programmed to turn your TV on or off - although I'm yet to find a way to get it to switch my TV's HDMI inputs.

However, Roku has spoiled a lot of people with a high bar for remotes, which does mean some disappointment here. The Roku remote for the Ultra comes with a headphone jack ŌĆō great if you've got a sleeping spouse you don't want to disturb while you binge on The Queen's Gambit.

There's no such jack on the remote you get with the Streambar, but it does have voice search functionality.

Another bugbear for me is those four buttons at the bottom, which launch the streaming services of the logos shown.

These are only useful if you subscribe to those services ŌĆō you can't reassign them.

They're region dependent... they're linked to Netflix, Hulu, Sling and Disney+ in the US... the UK version I tested for this review is Netflix (great!), Google Play (okay), Spotify (erm..) and Rakuten TV (never in a million years).

These placements are no doubt a decent money spinner for Roku but I'd rather pay an extra dollar (or pound) or two and get the ability to program in my favorites. Roku could even put some little stickers in the box. They can have that idea for free.

Setting up the Roku Streambar, as with the rest of the Roku range, is an absolute breeze. Roku does encourage you set up a profile within its own dedicated app and, if you do this, you can also have payment methods and the like carry over from other Roku devices.

The other big bonus of using the Roku app is that you can program in your favorite apps and services in advance, rather than manually configuring in the step-by-step walkthrough the device offers up.

However, even that is a fairly hassle-free experience although there is a heck of lot of absolute crap offered, alongside the big hitters such as Netflix, Hulu, Prime, Apple TV+, Disney+ and the like. So it takes some filtering to get the exact channels you want.

Roku calls apps and streaming services "channels' by the way. Sure, why not?

Each individual app does require you signing in though, although some providers like Disney make it a much easier affair if you have a smartphone in hand where you are already signed in.

Once you've designed the layout of your homescreen, you are good to go. You simply jump in and out of apps at will, with the Home button on the app always bringing you back to your homescreen.

The main home screen just lays out your apps, and you're getting feature parity among all of them. They all work the same. You don't have to worry about corporate spats keeping a native YouTube away, for instance. Similarly, the interface is easy to navigate and use.

However, the idea behind Roku is that it doesn't matter where your chosen movie or TV show resides, you can search for it with the voice compatible remote, which will show you where things are available to stream for free or at the lowest cost. You can also use the Roku app to search for content, as well.

There's a tiny lag when switching between apps and watching shows and movies but, overall, I've had no Wi-Fi hiccups and 4K quality is pretty great.

GreatŌĆ” but not the best. There is HDR support, but it's HDR10, not Dolby Vision or HDR10+. Given that the Streambar is somewhat of an entry-level device, this is a minor quibble rather than a deal-breaker. You're still getting 4K HDR at 60fps.

When it was announced, Roku stated that the four built-in Dolby Audio speakers would be able to "produce sound well beyond its size while increasing speech clarity and adding intricate depth to music."

That, I'm happy to report, is true. It's a great sounding speaker for its size and, while perhaps not a full cinematic room filling experience, it does a great job in smaller rooms and adds a lot of depth to the audio arrangement.

Those four 5cm full-range drivers are positioned whereby a pair fire forwards and two angle away from the head-on listening position. That helps to create a pretty good multi-directional audio performance.

It's no Dolby Atmos rival, but you'll notice a stark contrast from using your TV's built-in speakers.

If you think the compact form factor isn't up to the audio those visuals deserve then you can also pair it up for surround sound with a Roku Wireless Subwoofer and / or some Roku Wireless Speakers.

In terms of adjustments, the Streambar doesn't offer a detailed equalizer (EQ), but there are some pre-set modes to choose from to reduce or raise the bass levels, boost the voice output or set a limit for night-time TV viewing.

There's no built-in voice assistant, aside from the search functionality in the remote, but the Streambar is able to be controlled using either Amazon Alexa or the Google Assistant.

You can search for content using the two voice assistants but, given you can also do that with the remote, it's probably more useful to use Alexa and Assistant integration for powering the device on/off, or incorporating into routines.

That's also possible with HomeKit and Siri, and the Roku extends its Apple compatibility to being a fully-fledged AirPlay 2 speaker as well. If you playback music from your iPhone or iPad with your TV on, the Roku will also display album art.

That's not it for music streaming though, the Streambar also acts as a Bluetooth speaker and is compatible with with Spotify Connect and Google Casting.

It's a pretty good music speaker, not amazing and not quite as strong as the likes of the latest Echo or Nest Audio but perfectly acceptable in a bedroom; which I think is the perfect spot in the house for the Streambar.

Roku Streambar
Roku's Streambar is a superb 'two-bird, one-stone' device. Not only will it make your dumb TV smart (or your smarter TV even smarter and more streamlined), it also solves the biggest issue that even the best modern flat TVs have - tinny sound. The Streambar will hugely enhance your TV's audio and, because there's also an array of music streaming options on board - think AirPlay, Spotify Connect, Google Cast and Bluetooth - it also adds a third element to its arsenal; that of being a decent speaker too. That's why I think the Roku Streambar is the perfect bedroom soundbar.
PROS
CONS
TAGGED    smart tv and streaming