Does Roku's flagship stick it to the competition? 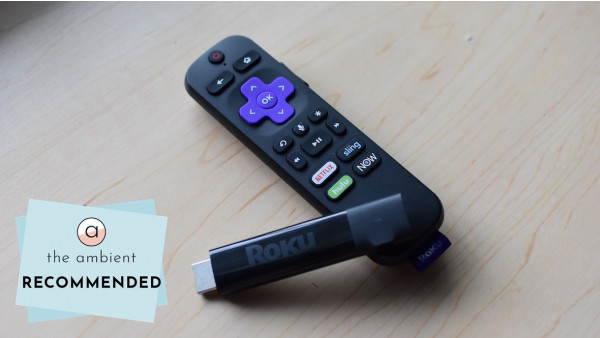 Before Amazon, Apple and Google entered the world of streaming, there was Roku. The company helped popularise streaming devices, and the combination of a well-fed platform and a varied lineup of products has made Roku the streaming platform of the people.

Of those devices, the Stick+ is the flagship right now, balancing performance against an affordable price. You simply stick into an HDMI port on your TV ├Ā la Chromecast, and you're off.

But in the golden age of streaming devices and services, is Roku still a worthwhile option, or should you look to others ŌĆō like the Fire Stick 4K? We've spent some extended time with the Roku to find out.

One of the biggest pain points in setting up a new streaming stick is having to find yet another power outlet. That's where the Streaming Stick+ has an advantage over many of its rivals, as you can instead plug it into your TV's USB port to source its power.

The USB option is much, much easier if your TV has a USB outlet on the back (many TVs built in the last five years will have them). If it doesn't, you'll have to use a power outlet instead.

This is really the story of Roku's designs. They're designed not to look great, but for the best user experience. The actual streaming stick comes with a wireless extender that bumps up the Wi-Fi reliability and range of the Streaming Stick+. While it's a bit unsightly ŌĆō it's literally a cable with an extended stick on it ŌĆō it's there to keep the Wi-Fi from faltering.

If you've already got a lot of devices hooked up to your TV or entertainment cabinet, like a sound bar, Xbox One, PlayStation 4 etc, using your TV's USB port for power can be a nice source of relief. Plus, you can avoid having to hide one more ugly cable hanging from the back of your TV.

Similarly, the remote is comfortable to hold, with a groove in the back that's placed perfectly for your index finger. Buttons are responsive, squishy and, in addition to controlling volume, the Roku remote can turn your TV on or off. So one less remote to think about.

I've got a Samsung Smart TV, but when I'm using the Roku I don't have to leave its interface unless I need to switch to a game console. It takes care of everything. Well, almost everything.

Roku has spoiled a lot of people with its high bar for remotes, which creates some disappointment here. The Roku remote for the Ultra, for example, comes with a headphone jack ŌĆō great if you've got a sleeping spouse you don't want to disturb while you binge a couple episodes of The Twilight Zone. The Streaming Stick+ version of the remote doesn't have this option, but I wish it did.

Also, the four buttons that launch various streaming services are only useful if you subscribe to those services ŌĆō you can't reassign them. They're linked to Netflix, Hulu, Sling and DirecTV Now. I've got Netflix and Hulu, so those are fine, but the other two are redundant. These companies pay for the placement on the remote, which is why you can't reprogram them.

Also, the voice button is pretty tiny. It sounds like an odd complaint, but it's difficult to press and hold without touching other buttons, especially if you have big fingers. I have big fingers.

As far as the software setup on the Stick+ is concerned, it's pretty breezy. You'll have to download the latest software updates, then register your device and sign in with your Roku account. Pretty standard stuff, and we had no hiccups.

The core of any streaming stick is, well, streaming performance. The Roku is an admirable performer here, but it's starting to feel a bit dated with the likes of Apple TV 4K and Fire Stick 4K available.

The Streaming Stick+ does well for the most part. There's little lag switching between apps and watching shows and movies. We've had no Wi-Fi hiccups and 4K quality is pretty great.

GreatŌĆ” but not the best. There is HDR support, but it's for HDR10, which isn't as good as either Dolby Vision or HDR10+ ŌĆō both of which are supported on the Fire Stick 4K. There's no Dolby Atmos support either. When compared with the Fire Stick 4K and Apple TV 4K, which have both, the Stick+ feels in need of an update.

Still, you're getting 4K HDR at either 60 or 30Hz, and the auto-detect here works pretty well, so it's all done in the background. Roku's setup process takes care of it.

When you consider that the Stick+ is $10 more than the Fire Stick 4K, that starts to feel like a bad deal. Well, until you realise that Roku makes up for its lack of technical superiority with how great its interface is.

Apple and Roku both have video storefronts they like to push. The Apple TV 4K works best if you heavily invest in iTunes and use the TV app; Fire Stick is built around Amazon's video offerings. That's great if you're into those two ecosystems, but on Roku everything is on a level playing field.

The main home screen just lays out your apps, and you're getting feature parity among all of them. They all work the same. You don't have to worry about corporate spats keeping a native YouTube away, for instance. Similarly, the interface is easy to navigate and use.

It's even easy to find 4K content, as there's a 4K spotlight section that lists all of it. You can also use the voice search to find 4K things, though it only points you to either Fandango Now or Amazon Prime Video. It doesn't appear that Netflix is integrated into Roku's voice search. Speaking of voiceŌĆ”

The Streaming Stick+ is compatible with both Alexa and Google Assistant, and setting them up is easy enough. You'll just need to enable the skill on Alexa, or link your Roku account with Google Assistant.

But performance of both is hit and miss. Roku says you'll be able to use both to turn your Roku on or off, play and pause TV shows and movies and launch apps ŌĆō but only some of those work. Trying to turn the Roku on or off doesn't do a thing, while trying to pause just causes a skip ŌĆō it'll pause for less than a second then keep playing.

User reviews of the Roku Skill in the Alexa skill store echo these glitches. The Roku skill appears to be broken, with major promised features flat-out not working. We emailed Roku for a response but did not receive one at the time this review was written.

Neither Google Assistant and Alexa will launch Netflix. They launch other services, like Amazon Prime and Hulu just fine, but when it comes to Netflix they won't do a thing. Launching other things works fine, and it's actually pretty quick, but if you're looking for extensive voice abilities, you're better off with a Fire Stick 4K.

Roku Streaming Stick+
The Roku Streaming Stick+ isn't the most advanced streaming stick out there, and it actually might be a bit overpriced when compared with the Fire Stick 4K, but Roku makes up for it in other areas: the fantastic interface, a great remote, and general ease of use.
PROS
CONS
TAGGED    smart home