A must-have gadget for controlling dumb heating and AC units 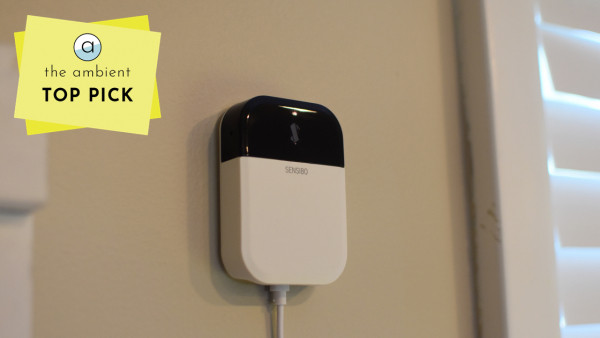 The smart thermostat may be the golden child of the smart home, but not all heating and cooling could be controlled by one of these nifty devices. Until now, if you had a window AC unit, a ductless mini-split, or a portable unit that you want to be able to control with your voice, program from your phone, and have turn on and off based on your location, you were out of luck. But no longer.

The Sensibo Sky is a retrofit gadget you stick on your wall to turn your AC (or heating) unit into a smart device. It works in both the UK and the US ŌĆō in fact, globally ŌĆō as it doesn't wire into your unit or electrical system; it simply piggybacks off its remote control frequency. This does mean it will only work with systems that come with a remote control to operate it, but, if that's your unit, you're going to want one of these.

We spent three weeks living with a Sensibo Sky attached to a mini-split heating and cooling system in the height of a South Carolina summer. Here's our take.

A small device about the size of your palm, Sensibo comes in white and black or black and grey. It has a modern look, with a matte plastic finish on the bottom and glossy plastic top half.

Price when reviewed
$119
Buy on Amazon

There are no controls or lights on the device itself, and it needs to be mounted near your AC unit's line of sight, so you can't tuck this away somewhere.

Installation was very simple and took less than five minutes. Connect it to power using the included Micro USB cable (you can get a battery pack if there's no outlet near your unit), download the Sensibo app, and scan a code at the back of the device.

The app then walks you through naming the device, connecting it to Wi-Fi (2.4GHz only, although it paired with no problems to our dual-band mesh network), and pairing it with your unit by pointing the existing remote at the Sensibo and pressing the power button. Now you're up and running.

The Sensibo Sky works by piggybacking off the remote-control frequency your unit uses to talk to its existing remote. Once paired, it can do everything the original remote could do - translating the controls to a simple screen in the app.

Visit Sensibo's official site to check if your unit or system is compatible, but if it's a system with a remote that has a display showing the air conditionerŌĆÖs current settings (for example, mode, target temperature and fan speed), it will most likely work.

Once paired, Sensibo lets you control your AC unit using your smartphone anywhere you have an internet connection, by voice (through integrations with Alexa and Google Assistant, and Siri shortcuts), and by setting up schedules and geofencing through the app.

The last two features are key, as many window AC units and mini-splits don't have very good scheduling systems ŌĆō if they're present at all, they're fiddly and confusing ŌĆō and there are no smart mini splits on the market currently (although you can pick up some connected window AC units).

Sensibo also has a beta feature called Climate React that mimics some of what smart thermostats can do by intelligently reacting to changes in temperature or humidity. For example, you can set it to turn the unit on if the temperature reaches a certain point or goes below a certain point.

You can only set up one scenario in Climate React, but this is a handy feature if you want to turn the unit off while you're gone but not have it work really hard to get back to a comfortable level when you return.

The feature works well in tandem with the geofencing capability, which turns off the system when your phone leaves and on when you come back. A great way to save energy but still come back to that comfortable home.

Sensibo works with Alexa and Google Assistant, and once linked you can ask your favoured AI to turn your system on or off, or adjust the temperature by a specific number of degrees. We really liked the Google Assistant integration as on the Google Home device it brought up physical controls (which the Amazon Echo Show didn't).

Sensibo also has an IFTTT channel, but it's somewhat limited. Its open API has seen some good integrations spring up for SmartThings, Homebridge, and other similar smart home systems. With all of these, you can add your Sensibo to routines, scenes and automation as a "thermostat" and control it just as you might any smart thermostat.

We tested Sensibo in a master bedroom/home office that had been converted from a garage and had its own ductless mini split (the rest of the house is on a standard HVAC system controlled by a Nest and an Ecobee). We'd had the mini-split installed for six years and have been very frustrated at not being able to make it smart.

It's hardwired, too, so there was no way to plug it into a smart plug, and the scheduling on the remote control was frustrating and often didn't work, so it generally ended up being left on most of the time ŌĆō terribly inefficient.

Adding the Sensibo has been a transformative experience. We don't have to hunt for the remote (which we were always losing) when we're getting a bit toasty ŌĆō we now simply ask Alexa to turn the "midi" (as we call it) up.

Read this: Clever ways to use your smart plugs

When we don't want to wake anyone up in the middle of the night if it's getting too cool, it is easy to use the smartphone app or swipe down on the Google Home Screen on our bedside table to change the temperature (the remote that came with the unit isn't backlit, so it was a pain to use in the dark). We also use the scheduling feature to create a weekday and weekend schedule that fits our daily routine, but that can be interrupted by the geofencing if we leave.

As I work from home, but frequently leave the house, this really helped cut down on the energy-use of the system, which previously just ran all day. A vacation mode would be a nice addition, however, as when we went out of town and turned Sensibo off, the schedule kicked back in again and we had to go in and manually turn each scheduled setting off (which we then forgot to turn back on when we returned).

Most worthwhile is the geofencing. The only flaw we encountered is that it doesn't work so well with two people. We downloaded the app on both parents' phones in the house, but it only reacts to one, sometimes leaving the other in a room with no AC. It would be helpful if each person could have their own account, so the device could more easily recognise who was there. Instead, you have to share your login information.

Another minor irritant is that your existing remote won't recognise when you change the unit through Sensibo, and vice versa. While you can still use it to control the AC, it isn't clear what temp you've set it too, because the Sensibo itself doesn't have any controls or display on it, and our mini split doesn't either ŌĆō everything is on the remote.

To avoid confusion, we put the remote out of use (somewhere safe just in case), and only use our phones, voices and smart screens ŌĆō oh, and the web interface, too ŌĆō to control the unit.

This is an excellent device, if slightly expensive, that is a must-buy for anyone with a non-smart air conditioning unit who wants to have more control over it. And, while it is pricey, you'll likely recoup a fair amount of the cost in energy savings in a year or two.

Sensibo Sky
Sensibo Sky is a seriously great solution to the problem of 'dumb' AC units. It works as advertised, will respond to your location and changes in temperature in the room, and lets you control multiple units from one app. The smart home integrations mean it can work just like a smart thermostat and integrate into any smart home routines you want. It's on the expensive side for what is essentially just a box that translates infrared signals, but, if you can get this on a deal, it's well worth it.
PROS
CONS
TAGGED    thermostats    smart home