SimpliSafe Security System review: Simply the best, but not smarter than the rest

Easy to use, excellent security features, just lacking on the smart home side 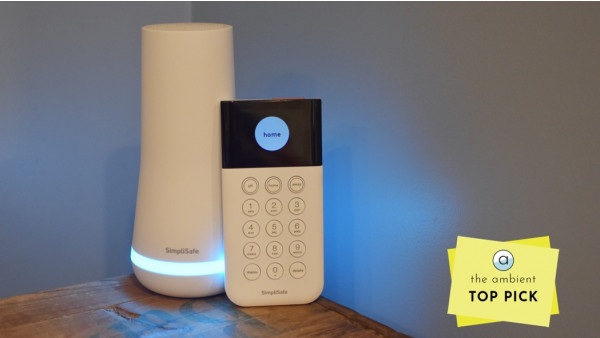 But, as competing systems - such as Abode and Ring - are getting smarter and more integrated, and with only basic support for Alexa and Google Assistant, is SimpliSafe's walled garden approach still the best?

We re-tested the system, including looking at some of its newer products - a video doorbell and a smart door lock - to see if this super simple approach is still the best option for a smart security system.

Read on for our full verdict.

SimpliSafe's products are very nicely designed. Everything is compact, with smooth lines and slimline profiles, making it easy to slot into your home. All that is except for that giant base station and clunky keypad.

The base station sticks out like a sore thumb, and while there's a black version that may blend in better, the blue LED ring is super bright (you can turn it off) and it's a beacon of a device. We wish it was ŌĆō at the very least ŌĆō shorter.

The keypad is similarly oversized and uses a rather outdated press and scroll interface, which, to be fair, is really easy to use.

The newer products, including the indoor security camera, video doorbell, and smart door lock (a retrofit device that goes over an existing deadbolt), are much nicer looking. The door lock even comes in a selection of colors to better blend in.

The most important design feature however, is that all the SimpliSafe gear is really simple to use and is the main reason SimpliSafe's setup is so enticing.

Each piece, from the base station to the sensors, arrives paired to your base station with a battery pull tab that you just pull to activate, it's that easy.

First, you activate the base station by plugging it in, it connects to Wi-Fi so no need to plug into your router. Then next comes the keypad followed by all the sensors. Activation happens automatically as you pull; syncing with your keypad where you can name each device.

Unlike most smart home security systems we've tested, you don't do any of this in the app, all the connections happen through the keypad. And also, the Base Station chimes in during set up with voice prompts to help you along.

Once paired, you'll install the wireless sensors around your house, and they all come with pre-applied adhesive pads to make this... simple.

Even the keypad has a mount that sticks to the wall, so you can pull the keypad off the frame and walk it around the house, then put it back when you're done. It's good, convenient design, which is a theme throughout SimpliSafe's devices.

A basic system - which costs $199 - comes with a base station, keypad, door sensor, window sensor, key fob and yard sign and stickers. This price is right in line with offerings from Ring and Abode. You can of course, build out your system and unless you live in a studio apartment you're going to need more kit.

Thankfully it's super expandable. SimpliSafe offers everything you might need, from extra smart motion sensors and glass break sensors, CO2 sensors and water leak sensors, to cameras, door locks and fire alarms. It does get pricey quick however, but there are always sales going on.

Once you've bought the gear using the system is free, if you just want an alarm in your home that will sound if someone breaks in. If you opt for professional monitoring it's $14.99 per month with no contracts, that gets 24/7 monitoring, cellular connection and environmental monitoring (smoke alarms etc.).

But if you want to use any of the smart features or control the entire system from the app it's going to cost you $24.99 a month. Significantly more expensive than the top plans from Ring ($10 a month) or Abode ($20 a month).

This "Interactive Plan" builds on the basic plan and adds the ability to use the app to arm, disarm, and monitor the system, receive smartphone alerts, use secret alerts, view camera footage and recorded video (storing up to 30 days of event-based video), enable video alarm verification, as well as let you unlock integrations with AmazonŌĆÖs Alexa and Google's Assistant.

However you choose to control it, the system has three modes to choose from: Off, Home, and Away. Off turns monitoring off completely, though you will get chimes when doors open. We have it set up so that it plays a chime any time the front door opens. Home just arms the exterior sensors and Away arms everything.

When an armed sensor is triggered the alarm sounds and unless you disarm it via the keypad or app using your pin code you'll get a call from the monitoring center quick smart. If you give them your safe word they'll stand down, if not emergency services will be dispatched.

An excellent reason to invest in one or both camera options is that they can be opted into SimpliSafe's video verification feature, which allows SimpliSafe's monitoring team to tap into your video feeds when an alarm is triggered. SimpliSafe can then give the cops a live description of whatever's going on, helping expedite any response.

The doorbell cam wires into your existing doorbell wiring and works with any existing chime. It uses motion and heat sensing, boasts a wide 162-degree field of view, and can be set to be triggered to record by people only or all motion. You can also set activity zones to cut down on false alerts.

The doorbell is really small and super easy to install. It comes with a mounting wedge that helps it point down towards your doorstep for package protection. The 1080p HD video with HDR imaging produces a good picture in daylight, but the infra-red night vision is pretty poor.

The indoor camera has a nice, lightweight design and a handy mount that can be used as a stand or attached to a wall. It includes a physical privacy shutter that can be triggered to close when the system is off and open while youŌĆÖre away.

With just 720p video quality and a 120-degree field of view, these specs aren't great however. The two-way audio is also quite distorted, and there's no people detection, just motion. But for visual verification purposes during an alarm, it will certainly do. An optional weatherproofing kit lets you put this outdoors, although the cord will need to be indoors.

The SimpliSafe door lock is a very good addition to the system, mainly because its included keypad also acts as a way to arm and disarm the system. Check out our full review here, and it's also worth mentioning that you can use it without paying for the professional monitoring and still lock and unlock it in the app.

Overall the app is good, responsive and easy to navigate. There are some things you can only do on the keypad however, and there aren't any prompts to tell you this. It also takes a while to sync any changes to your base station.

It opens to your system status - Off, Home or Away as well as the status of your door lock. A camera tab shows you snapshots of your cameras feeds, which you can tap into to watch live. A timeline tab gives you a quick overview of what's happened, and you can click on each notification to see video clips where applicable.

While not obvious from the app, SimpliSafe works with Google Assistant and Alexa, but for voice control of arming only ŌĆō thereŌĆÖs no integration into Google or Alexa Routines or option to disarm with voice.

SimpliSafe garners top accolades from many review sites because it's really simple. It doesnŌĆÖt require a smartphone app for control and you can do most anything from the keypad controller.

This makes it great for non-techie folks, like your mum or neighbor, or for putting in a rental property or vacation home where there may be lots of different people who need to access it.

It's not a great system if you are a die-hard smart home junkie. There's limited integration with Alexa and Google, it doesn't work with other smart home products such as thermostats, lighting and other lock brands (other than August), or have the Z-Wave and Zigbee expansion capabilities of a system like Abode.

But if you don't need those, using the system is really straightforward. You can arm it in a few different ways. Connect it to Alexa or Google Assistant for voice control, use the app, use the keypad, or use the door lock keypad.

The main system keypad is the best solution all round, as it allows everyone in your home to control the alarm without having to download apps or talk to an assistant. You can also do everything you might need to on it - it's much more than just a keypad. You can change settings, set alarm duration or exit duration - basically everything you can do in the app and then some.

The only thing you can't control on the keypad are any cameras you might have connected. The display isn't a touch screen, it's a dot matrix affair (think Speak n Spell!), and it can be a bit laborious pressing, tapping to get to what you need. But it's a solid piece of kit that is simple to use.

Our biggest frustration with using SimpliSafe is there is no way to automate arming and disarming your system - a problem competitor Ring also has. You have to manually arm it in one of the ways we've mentioned and manually disarm it, which means you have to remember to do it. That's just not smart.

Also, having to pay to use the app for pretty much anything defeats the purpose of a contract-free solution, because if you don't pay your system is basically useless. Yeah, the siren will go off in your house and you can use the keypad to control it - but there's nothing smart about that.

One thing we really like is that there are a number of backups in place. If you lose power, your system will work for 24 hours thanks to a backup battery in the base station, and there's a cellular connection, so if your internet goes down your devices will still be connected and monitored (if you pay for the basic plan or higher).

There are also neat features like silent alerts. Say you have a liquor cabinet and you don't want the alarm to sound every time it's open ŌĆō maybe you want to make sure the kids don't get to it while you're away for the weekend ŌĆō you can pop a contact sensor on it and have the system send you an alert on your phone but not trigger the cops to show up.

SimpliSafe
Buy from Simplisafe
SimpliSafe
SimpliSafe hits a sweet spot in the smart security game. While it can get pricey, its ease of use and an extensive set of security features make it the complete smart security package. Police response time is quick, and features like video verification and silent alarms are excellent. While Simplisafe is a walled garden, arguably it works as well as it does because of that. But with only basic support for voice control through Alexa and Google Assistant and no HomeKit, Z-Wave or ZigBee support at all, this is one to skip if you want a completely integrate your smart home with your smart security system.
PROS
CONS
TAGGED    security systems