This bot is big on features and has a large battery and bin, all for a small price 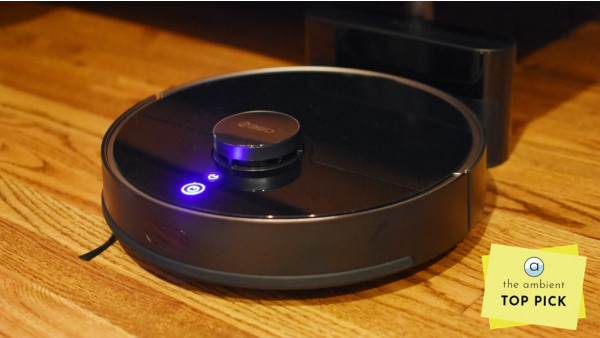 There are three levels of robot vacuum cleaners: budget, brainy, and brilliant.

Budget are sub-$300 bots that bump and roll blindly around your house doing a semi decent job, whereas the brilliant ones navigate nimbly around obstacles and smartly clean every inch before emptying their own bins - but you pay a pretty penny for this convenience.

Then there's the brainy ones. Smart enough to know where to go, where they've been, and where they're not allowed.

These brainy robot vacuum cleaners occupy a sweet spot, and this is where the $430 Smart 360 S7 Pro sits.

Packing artificial intelligence and smart mapping, the S7 Pro can map your house, work around virtual boundaries you set, and head home to charge and then back out to finish up - meaning it will always get the job done.

Price when reviewed
$429
Buy on Amazon

A large, 580ml bin, paired with a 3200mAH battery means it can get around an entire floor in one go and with LiDAR and SLAM technology its mapping and navigation capabilities are up there with the top-rated Roborock S4 Max and Ecovacs Deebot T8 (minus the auto-empty station) in both price and capabilities.

So, how does this mid-range robot vacuum stack up against the competition? We've been living with the Smart 360 S7 Pro for a month now, read on for our full review.

The Smart 360 looks a lot like the Roborocks and Deebots of this world: round, shiny, and black with a little tower on top and a couple buttons for manual controls (a start/stop and home button).

It's very slick and modern looking, however that shiny plastic top shows fingerprints quickly and got scuffed up pretty badly in our month of testing.

It's a big robot, almost 14 inches wide. But it's only 4 inches high, so low enough to fit under most furniture. That wide berth does mean it struggles a bit under chairs.

The big design difference here is the charging base. The S7 Pro sports a compact, elegant base that's much nicer and with a much smaller footprint than any other model we've tested.

Instead of a flat platform that sticks out and where the robot must position itself exactly to hit the charging connectors, it's just a sleek, rectangular base with two electrode strips on one side. The robot has corresponding ones and it bumps them gently to charge.

In testing it always hit the connectors spot on, never requiring adjustment, something almost every other robot we've tested has struggled with.

The robot is powered by a whopping 22 sensors, including four anti-drop sensors, anti collision sensors and LDS LiDAR and SLAM (simultaneous localization and mapping movement algorithm) technology to allow for smarts such as mapping rooms and routes.

A large, 580ml bin is located under a flip-top lid, along with a small cleaning brush. Underneath is a side-sweeping brush that catches debris and pulls it into the path of the main brush, which has anti-tangle tech to keep it from digesting cables.

A little over a third of the undercarriage is reserved for the mopping pad attachment, which holds a measly 170ml of water, comes with one reusable mopping pad, and whose performance is lackluster at best.

For a mid-priced robot the Smart 360 has a lot of smarts. It does most everything the higher-end models from Roborock and Roomba do - including mapping your home quickly and accurately thanks to LiDAR (it can store up to 10 maps).

It will also clean on a room-by-room basis, avoid rooms or areas using virtual barriers you place on the map in the app, clean on a schedule, and "recharge and resume" if it runs out of juice during a clean.

It offers four cleaning modes, Quiet, Standard, Powerful, and Max, and you can tell it to use a different mode in different rooms (such as more power in the kitchen after dinner and less in the living room while you're watching the telly).

Cleaning is methodical, using a zig-zag pattern that covers most of a room effectively in neat lines. Because of its round shape it didn't do great in corners, but its large side brush did a decent job of pulling debris out of the edges.

It tackled all forms of dirt and debris very well and was good at managing small obstacles like room dividers thanks to two tank-like wheels.

Its anti-collision sensors did an excellent job of avoiding bumping into furniture but this did mean it didn't always pick up dirt that was closest to objects and walls.

There is an option to turn off anti-collision in the app if you want it to bump into things like curtains or bedspreads - but changing this setting didn't seem to make much of a difference to operation.

We found the "Powerful" mode to be the best option, offering a good balance between decent suction and bearable noise, although even at Max this bot is surprisingly quiet (see video).

The quiet mode is quiet enough to let it roam while you're working at home or even watching TV, and it does actually do a decent job even at that level. It employs a dual noise reduction duct to keeps the sound levels below 55 dB.

The S7 Pro can also mop - although as with many robot vacuums that double as mops - it's the "drag a damp cloth across the floor" method of mopping. This is definitely not a feature to buy this robot for, but it's an option.

The robot offers voice prompts, and rather endearingly/irritatingly says "Cleaning makes me happy" every time it starts a clean. It will also tell you when it's in trouble or if it needs your help.

Handily, if it gets stuck somewhere the app will suggest creating a no-go zone in the spot to prevent it happening again.

You can also control the vacuum by voice using Alexa, but this is limited to just turning the robot on and off, you can't have Alexa tell it to go clean the kitchen, for example.

You can do this in the app however, thanks to the room-by-room cleaning option, and you can also use the app to "spot clean" an area (there's no spot cleaning button on the device itself.)

Poor English and confusing directions aside, the app has plenty of settings to tinker with to get a top clean and effective mapping lets you segment your area into rooms, choose the order it cleans them, and how many times the robot will go over each room, as well as customize the suction level.

You can't specify the amount of water the mop uses if you are in moping mode (as there's just one level everywhere). For that type of control you'd need to upgrade to the Smart 360 S9, the company's flagship bot that also features ultrasonic sensors and a bigger battery alongside an integrated water tank for mopping and a physical remote, for about $100 more.

The app is very solid, rarely losing connection with the bot and even tracking it in real time on the map.

It is a bit cluttered though, and takes some time to get to grips with in terms of setting up more advanced features such as mapping and no-go zones. But it is easy to start a clean - just tap the suction level you want and hit clean and off it goes.

If you want a mop, you attach the mopping pad and it automatically switches. You need to set "no mop" zones if you have carpeted areas as it won't intelligently avoid them as some bots will. In vacuum mode it will increase its suction power if it hits a rug.

You can also set schedules in the app, add Do Not Disturb times, and even enable a remote control mode (although we found this to be quite fiddly and never had any real use for it).

The S7 Pro has a sizable 3200 mAH battery and takes about 4 hours to fully recharge. At 20% it will head back to its base to charge up before resuming, but the combination of big battery and big bin is very good for large areas.

We tested it for two weeks at a fire house (where 9 firefighters rotate 24 hour shifts) and it managed to clean the entire area - a kitchen, living room, dining room, four bedrooms and a bathroom - on one charge. Heading back to base after 107 minutes.

After all that work however, it was showing some wear and tear. But a maintenance schedule in the app has a rundown of how much time each part has left before needing a clean or replacements. The app also prompts you to wipe the sensors and offers other maintenance tips, but it didn't ever warn us when the bin was full - so you do need to keep an eye on that.

After a full month of use and 60 hours of runtime, the filter was at 60%, the side brush 70%, and the main brush 80%. Unfortunately, there are no spare parts included, but a complete replacement kit - including disposable mopping pads is just $16 on Amazon.

Smart 360 S7 Pro
This is an impressive mid-range robot vacuum, with all the most important features for making sure your robot cleans your house properly: mapping, anti-collision and anti-tangle features, and virtual boundaries. The Smart 360 S7 Pro is a true workhorse too, able to run for close to two hours without filing its large bin, plus it can recharge and continue, making it ideal for big houses. The app is solid, if a bit fiddly, but the smart home integrations are really lacking - there's no Google support and not being able to use voice commands to direct the room-specific cleaning is a real shame. But these are minor quibbles and we loved how quiet it is, the superb suction power, and that elegant charging base.
PROS
CONS
TAGGED    robot vacuums