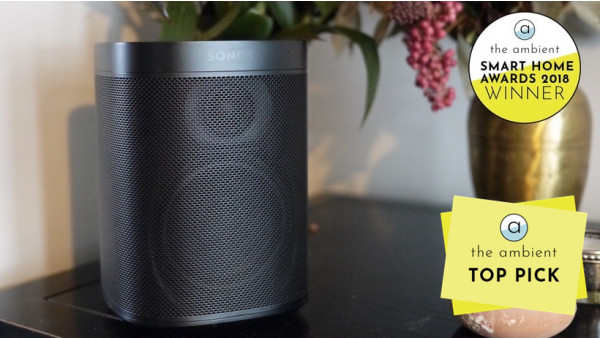 In a lot of ways the Sonos One is an exceptional smart speaker, but it's always felt like a work in progress. When we first got our hands on it, the headline feature was Alexa, bringing Amazon and Sonos ŌĆō two giants previously operating in different spheres ŌĆō together in the ultimate ambient computing alliance.

SonosŌĆÖ super streaming speakers were finally getting smart, but that wasn't all: Sonos also dangled the promise of Google Assistant in front of us. That was October 2017. Google arrived in May 2019. So you see what we mean by "work in progress".

Despite promises of improving the Google experience in time, it feels like the Sonos One has finally reached its intended destination. Not only that, but it is (as of the time of writing this) the first smart speaker to market to boast both Google Assistant and Alexa integration under one roof.

With the arrival of Google Assistant ŌĆō along with plenty of updates on the Alexa side ŌĆō we decided it was a perfect time to revisit the Sonos One and see how it fares in a landscape that's changed dramatically since October 2017. One final note: the Sonos One was upgraded this year to the Gen 2 model, which adds Bluetooth Low Energy, a faster processor and more memory ŌĆō but none of the audio or smart features have changed. If you want to pick up an older Gen 1, you can still get it $20 cheaper than the newer version.

The Sonos One is the Play:1's more intelligent twin. Side by side, the only major difference between the older Play:1 and the newer One is the grille, which has moved from grey to a choice of black or white. The One is a small speaker ŌĆō not even half the height of an upright Play:5 ŌĆō but the size belies what's hidden inside. Any inhibitions about the One's abilities will vanish the moment you pick it up and realize how heavy it is ŌĆō that'll be the pair of Class-D amplifiers you're feeling.

On the top of the speaker you'll find a touch-sensitive control pad for pausing/playing, adjusting the volume and muting the mic. With Google Assistant now joining Alexa, you've got fewer reasons to use this, but I still find myself tapping it in moments I need to quickly mute the One, like when I need to answer a call.

There's a fairly thick power cord here too ŌĆō another hint out of the box that this is no lightweight speaker. While we've seen smart assistants pop up in some wireless options, like the Libratone Zipp 2, you'll get no such thing with Sonos' speakers. These things need power.

So what can you do with the Sonos One? Well, firstly it works like a normal Sonos speaker ŌĆō weŌĆÖll get more into that later, but you can stream music from a host of services, built into the dedicated app.

That means the One can slip into a multi-room setup, be it with other Sonos, AirPlay 2, Alexa or Google speakers. It's Google Assistant and Alexa that most people will want to know about, and we'll go deeper on those in a moment, but since the Sonos One arrived it's become more capable in other ways. AirPlay 2, Apple's music streaming protocol, also rolled out last year, opening up a new way to use Sonos in your house. In fact, I almost exclusively stream to the One over AirPlay 2 with the rest of my speakers.

Sonos' range of supported music services has also expanded in the past year or so, and now includes all the big hitters: Google Play, Amazon, Spotify, Tidal ŌĆō even Apple Music. You can select your default music provider in the Sonos app, but when it comes to streaming using voice rather than the app, your choice of assistant will dictate which services you can ask for. More on that in a moment.

Sonos One: Alexa and Google Assistant

Engineering both Alexa and Google Assistant onto one smart speaker was no mean feat. In fact, Sonos is the first to do it, but it raises some interesting questions over how dual-assistant functionality should work. As Sonos itself said, there's no precedent for any of this.

Here's the main thing to know: You can't have Alexa and Google Assistant running at the same time. You have to choose your champion, but you can move between them as you wish, and handily most of your personal settings will remain intact if you switch over and change your mind. Switching between the two is as simple as tapping a button in the Sonos app.

When the Sonos One arrived, Alexa's functionality was fairly limited compared to what you'd get on an Echo speaker, something that's improved over time. For example, you can now include the Sonos One in an Alexa speaker group (and have Sonos as the Preferred Speaker) and Alexa announcements are also supported ŌĆō but Alexa calling, a feature found on Echo devices, still isn't active.

Overall, the Alexa experience on Sonos One in 2019 is closer to Amazon's first-party offerings, but not identical, which means Amazon's still giving a reason for people to buy its own speakers (that and the price, of course).

Read this: How to control Sonos with Google Assistant

As for Google, it's coming out the gate looking like Alexa circa 2017. You can't do voice calls. You can't use Broadcast. You can't use Voice Match. Or Continued Conversations (that one's a real miss). You can't set routines in the Google Home app either. It sounds like a big list, and there are some features here we hope to see sooner rather than later, but for everything else, Google Assistant performs admirably on the Sonos One. Google's not laid out a specific timeline for new features, but it promises Voice Match will be one of the first to arrive.

So now comes the burning question: what if you want both Google Assistant and Alexa across different Sonos speakers? You can. I have Google Assistant on my Sonos One and Alexa on my Beam and it works just fine when listening to music.

The reason for this seeming miracle is the Sonos app, which acts as a halfway house for every Sonos speaker in your home. I just asked, "Play Roxy Music's True to Life" on the Beam and then asked the One what was playing, and it was able to tell me. Because the metadata lives in the Sonos app, both assistants are able to play off each other. It also means you can start playing with one assistant and ask the other to skip tracks.

The only constraint here is that you can't have Google start playing from a music service that only Amazon supports, like Apple Music ŌĆō and vice versa. But if you asked Alexa to start streaming from Apple Music, Google Assistant can still skip tracks back/forward etc and tell you what's playing. One thing you can't do is use the Sonos One as a Cast device. The addition of Google Assistant doesn't automatically turn this into a Chromecast speaker, but you can use it to control other Chromecast-enabled devices in your home, including a Chromecast dongle in your TV.

There are still some barriers between the Sonos experience and the assistant experience. For example, Alexa and Google Assistant can't pull up offline tracks, so you'll need to go into the Sonos app for those. There's also still a problem with the assistants' cognitive abilities. These are much better than they were when we first tested the Sonos One, where we found that Alexa was profoundly deaf compared to our Echo speakers.

Sonos has since pushed out various software updates to improve this, and both Alexa and Google Assistant do seem to be better at hearing us ŌĆō but there are still times where commands don't fully compute. "Ok Google, play Fake Empire by The National" resulted in the Assistant taking a couple of seconds to process before announcing, "Here's 'This Is The National' playlist on Spotify". Twice. It got there the third time.

When we first reviewed the Sonos One, we also pondered whether the existence of the Sonos Alexa skill reduced the One's value for those who could just hook up a cheap Echo Dot to their existing (dumb) Sonos speakers. That same argument now applies to Google users, as Sonos has also rolled out "Works with" support, meaning you can hook up a Google Home to older Sonos speakers to control them too ŌĆō essentially turning them into Sonos Ones.

Got a Sonos Play:1 and a Google Home Mini? Congratulations, you basically have a Sonos One. It's just a more awkward setup.

While the feature set isn't as full as you'd get on an Echo or Google Home, as a speaker the Sonos One excels.

It sounds truly fantastic. Clear at every frequency, wonderfully balanced. Punchy bass that doesnŌĆÖt dominate and so, so loud. ItŌĆÖs an amazing speaker for something so small. Its design also enables it to deliver sound evenly across 360 degrees and it can truly fill a room.

This is where Sonos still, even in 2019, has the edge over Amazon and even Google. Yes, Google does now have the Max speaker, which packs a sonic punch, but isn't as balanced as Sonos. These smart home giants don't have the audio pedigree that companies like Sonos and Bang and Olufsen do. The relics of audio (can we even call Sonos a relic?) are in a race to embrace AI faster than the AI companies can get better at sound ŌĆō but ultimately we're hoping for a future where the two continue to merge.

Sonos One
This super sounding speaker is given an extra dimension by the presence of Alexa and Google Assistant, both baked in and ever-present. Sonos is a wonderful and scalable addition to the smart home, and with Google and Alexa now combined, a truly unique speaker. Chuck in AirPlay 2, a wide range of supported services and superbly balanced sound ŌĆō and Sonos is still the one to beat.
PROS
CONS
TAGGED    speakers