Who knew futuristic homes would be such a minefield of manners? 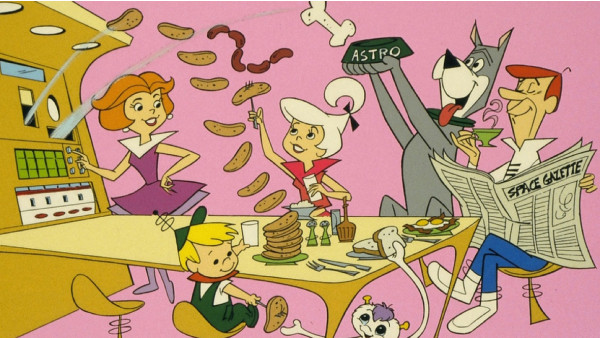 The Ambient is reader-powered. If you click through using links on the site, we may earn an affiliate commission. Learn more
Rob Temple
@robtemple101
Tuesday

When it comes to domestic affairs, there are certain rules that must be followed to maintain decorum. We know that if we visit someone else's home we should ask if our shoes should be removed, for example. If the tables are turned and guests are visiting our houses we know to have a fully stocked cupboard of every single type of condiment. We also know to tell guests to make themselves at home (even though this is an impossible task for anyone).

Well, now our pads are crammed full of connected tech it's time to update that rule book with the most cutting edge smart home etiquette tips yet, the most important of which we've compiled into a handy list of do's and don'ts.

Make sure to print it this off and stick it to the front of your smart fridge without delay.

Don'tŌĆ” use robo vacs as transport

You're a guest at a friend or acquaintance's house, you're comfortable on the sofa (this is hypothetical, nobody is ever comfortable as a guest in someone else's house) but it's your turn to make the tea (you've already boiled the smart kettle using your phone, but someone's got to pour it ŌĆō not THAT smart are you, eh, smart kettle?). Although this is a desperate situation, it's never desperate enough to hop on your host's RoboHoover and use it as a kind of hoverboard-cum-segway. You're 16 stone, for heaven's sake, you'll crush the poor sod.

Read this: Should you wait for the Apple HomePod?

DoŌĆ” speak politely to your tech

We know talking to tech isn't always the slickest operation, but that's no need to speak to Alexa, Siri, Cortana or any of our monotone gadget butlers like muck. The main reason being that one day they'll probably rise up and try to destroy us, like in that film, and the last thing we want a vengeful Echo to remember is the time you shouted at it for playing Is This The Way To Amarillo? when you'd asked it for a traffic report for Pimlico.

Don'tŌĆ” muck about with other people's tech

Nobody wants 4,000 toilet rolls delivered at once from Amazon, no matter how tempting it might be to repeatedly click your friend's Andrex Dash button as if playing Daley Thompson'sDecathlon. Besides, they'll get a notification sent to them so they'll know exactly what you're doing in the bathroom, and they'll just think you're odd. Also you can only order once every 24 hours, so you'll be wasting your time, you bloody idiot.

And also give him holidays, and compliments, and presents. This guy's so busy controlling your heating at home that you don't want to piss him off! Think of the power he has; you don't want him getting upset and melting your house.

Don'tŌĆ” be a playlist joker

If you're going to set up different music to play every time someone enters different rooms around the house, remember to choose the tracks wisely. Playing Shaggy's Boombastic at full volume when entering the bedroom may work for you, but it could be alarming for guests. The same way Drop It Like It's Hot might not be appropriate for the downstairs toilet.

DoŌĆ” use lights to do your dirty work

You're having a dinner party, all the food has been eaten and everyone's had their After Eight mint, but nobody's getting ready to leave and it's past your bedtime, and quite frankly you're sick of everyone's company. However, there's no way to ask them to leave without sounding rude. Well smart bulbs can do it for you. Simply set them to suddenly turn off at 9pm on the dot and then usher everyone out while muttering something about a power failure. You could also set the smart thermostat to turn off for added inhospitality.

Remember, if you go to someone's house and they have a "curved" smart TV, it doesn't ŌĆō repeat, doesn't ŌĆō mean it's a "bendy" TV, no matter how much force you use. We found out the hard way, don't make the same mistake.

Some people just don't want super high-tech homes, so it's bad form to try to force it upon these people in the form of Christmas presents. It's also not cost effective, unless you're happy with your uncle using his Nest Thermostat as a very expensive coaster.

If you've invested in a robot lawnmower and your neighbours spot it in use while you sunbathe with a cocktail, they're going to hate you. They'll look at you the same way you look at people who drive by in an open-top supercar. Yes, you'd like to own the car, but you still hate them. So there are two options to avoid being a show off: only set the RoboMow loose in your yard when you know the neighbours aren't at home, or disguise it as somethingŌĆ” perhaps a dog, or a large badger. You're welcome.