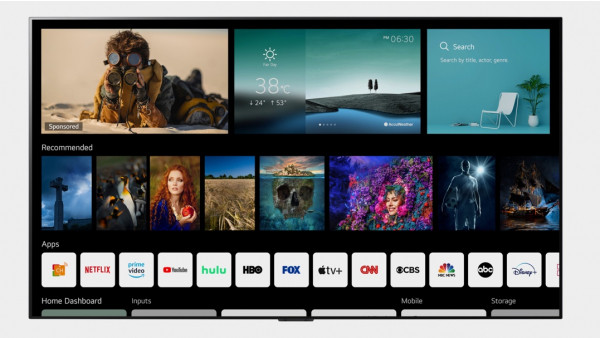 The Ambient is reader-powered. If you click through using links on the site, we may earn an affiliate commission. Learn more
Nicholas Fearn
@nicholasgfearn
Monday

WebOS 6.0, designed for LGŌĆÖs 2021ŌĆÖs OLED, QNED Mini LED, NanoCell, and UHD smart TVs - all of which have been launched at CES 2021 - sports a range of new features that should make content discovery on new LG smart TVs more intuitive.

LG's ThinQ AI has been updated to work more efficiently with both Google Assistant and Amazon Alexa. So, instead of manually typing and trudging through long lists to find that specific TV show you want to watch, you can use your voice instead.

Another highlight feature of webOS 6.0 is its resigned home screen. From here, you can quickly access your most-used apps and view recommendations based on things youŌĆÖve watched in the past.

If youŌĆÖre watching a movie or TV show and want to find out key facts about it, you can use the new Magic Explorer feature. ItŌĆÖll provide information such as actor names, movie locations, and many other facts.

A new version of the Next Picks feature is also included in webOS 6.0. By analyzing your viewing history and preferences, it can recommend TV content to watch and apps to use. The idea is that you donŌĆÖt have to think hard about what to watch or do next on your smart TV.

For anyone who regularly buys things from online shopping channels, thereŌĆÖs also a new content-dependent feature that makes it easier to find interesting products.

It highlights products across a range of broadcast channels and LG TV services such as Live TV, Gallery, Settings, and TV Guide. When new information is available on Magic Explorer, the color of the cursor will change.

Alongside webOS 6.0, LG has also unveiled a new version of the Magic Remote for 2021. It sports easier-to-use controls for LQ ThinQ AI services, Amazon Alexa, and Google Assistant.

The new Magic Remote also comes with faster device connections, hotkeys that provide direct access to popular streaming platforms like Netflix, and the ability to project mobile content to your smart TV via NFC.

ThereŌĆÖs no word on when webOS 6 will be released, but at CES 2021, LG has shown off a range of new smart TVs that will run the revamped platform.

LG also used CES 2021 to announce that Google's Stadia will land on its latest webOS smart TVs, in the second half of this year. LG will be the first TV brand to natively support Stadia gameplay via webOS.