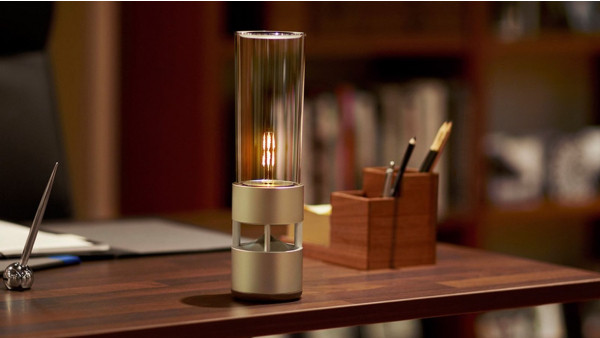 As Amazon and Google push budget smart home tech, Sony is taking a different tack. Life Space UX is the name for the "living room of the future" Sony is showing off at tech shows and a pop-up shop featuring Swoon Editions furniture in Shoreditch, London till 18 January 2018.

There's no overarching Life Space app that controls everything but right now Sony's beaut Glass Sound Speaker, its Ultra Short Throw Projector and its Google Assistant powered LF-S50G smart speaker fall under this umbrella. Aside from the smart speaker, it's all pretty luxe and high end.

Check out Sony and Swoon Editions' style ideas - some practical, some playful - at the gallery of the Shoreditch High Street pop-up shop below.

The Glass Sound Speaker's glass tube tweeter looks pretty stunning and the warm LED can be dimmed to mimic candlelight. The LSPX-S1, as it's also known, costs $800 and though it isn't technically limited edition, Sony tells us that this isn't being mass produced. We got a short demo of this fancy Bluetooth connected lantern and it seems to sound full and loud enough to be used as designed, in the middle of a dinner table or out on a balcony. You can also pair two for stereo sound. Still, you're really paying for the classy design here.

The Ultra Short Throw Projector has built-in speakers, a perforated body for minimal noise and a proximity sensor to turn on when you are close. It's meant to be tucked away on a desk, shelf or mantelpiece and can project onto walls, tables or other surfaces. With a 720p HD resolution and a projection size up to 80 inches, Sony had demos of movies and family photos as you'd expect but also a digital clock, weather app, animated artwork and even an illustrated children's book. Some ideas more practical than others for a $1000 piece of kit but we like the size, versatility and the picture.

The LF-S50G smart speaker is also on show - we first saw the mid-range $150 Google powered smart speaker back at IFA in September. Look out for a review coming soon.