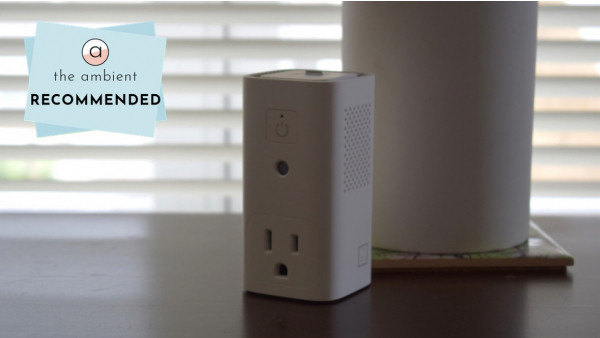 How's the air quality in your house right now? Any idea? We'll make it easier. Just give us the VOC number. Still don't know? Don't worry, you're far from the only one. In fact, unless you live somewhere air quality is a problem or suffer from allergies, you probably haven't felt the need to find out.

However, while this is mostly the same air quality monitor as before, Awair has made a few tweaks worth knowing about. LetŌĆÖs get to it.

Unlike many other air quality monitors out there, the Awair Glow C is the size of a smart plug. A tall smart plug, granted, but one that's hardly imposing. The Glow is designed to live on an outlet, and youŌĆÖll need to place it in the room you want to keep the closest eye on.

The Glow C also has an outlet on its front, which is meant to be used to automate "dumb" appliances in your home. We'll touch more on that in a moment, but it was a feature of the last Awair Glow, too. In fact, the only change in the C is a physical one: The top wood panel has been replaced by a plastic one and a larger LED.

That light is used to indicate air quality more clearly, now shining itself onto the wall above. But it can also be used as a night light when in "ambient" mode ŌĆō the colour of which can be chosen in the app.

Setup is a case of simply plugging it into the outlet and then downloading the app. You'll need to set up an account if you haven't already got one, and then scan the room for the plug. It's a quick setup, although we found some weird bugs when making a new account that made the app feel very amateurish. Don't worry, the rest of the experience feels much more legit.

It's also during setup that you can select what you're most interested in doing with the Glow C. Is it improving sleep? Productivity? Keeping an eye on allergies? Your choice will determine what types of alerts you get.

Awair Glow C: In use

As much as I initially loved the older Awair Glow, it wasn't long before I stopped checking in. I'm fortunate enough to live somewhere air quality isn't a serious problem, and I don't suffer from allergies (at least not badly). However, I also acknowledge that complacency is part of the problem, and yes, I should be more aware of the air I'm breathing despite these things. Because clean air is important, right?

The Glow C tracks temperature, humidity, and volatile organic compounds (known as VOCs) which come from things like aerosol cans, paints, varnishes and disinfectants. Bad stuff that can cause adverse health effects if breathed a lot.

These chemicals are obviously not something you want in your lungs, but there are reasons to keep an eye on the other stuff, too. If, for example, you live in a place where humidity is a problem, and that humidity is likely to create mold, then it makes perfect sense to monitor your air quality. Same goes if you have allergies.

You can see long-term trends in the app, with neat little charts showing the changes in temperature, humidity and chemicals over the hours of each day. However, we wish the app would break down the "chemicals" into the specific nasties, so we could see exactly what's affecting our air.

Despite the addition of the new light, the Awair Glow C's best feature is still the outlet. The idea here is that you can plug in a fan, humidifier, purifier or other such appliance, and have the Awair Glow C switch it on when the air quality becomes bad.

The app lets you set different thresholds for chemicals and temperature. For example, I have an air purifier plugged into my Glow C right now, and if the chemical level reaches above 340ppb (parts per billion) it will turn the purifier on. You can also set these triggers around a schedule, or only when it detects movement in the space.

There are also integrations with Alexa and Google Assistant, letting you ask the assistants for real-time air quality readings or have them turn the outlet and nightlight on and off. There are integrations with Nest Thermostat devices that will ventilate your air when CO2 concentrations get too high, and even integrations with Ecobee, Honeywell and iRobot (your Roomba can be set to vacuum when it gets too dusty) ŌĆō but these ones only work via IFTTT Applets.

Awair Glow C
The Glow C could be essential for some people, and simply a nice luxury for most others. Its best feature is that it doubles as a smart plug to automate fans, humidifiers etc. The new light is a nice extra, but if you can find the old model much cheaper, it's otherwise the exact same device.
PROS
CONS
TAGGED    smart home