And the company pledges all future vacuums will cut the cord 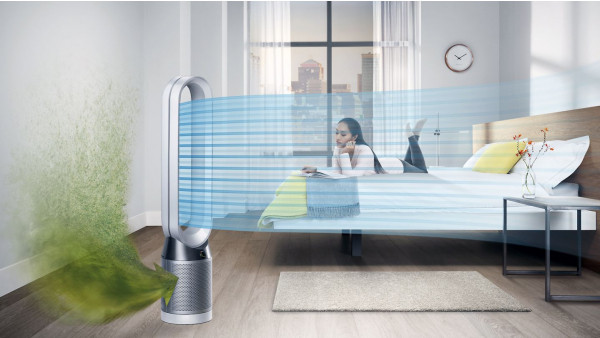 Dyson has taken the wrappers off a pair of new Dyson Pure Cool fans and a Dyson Cyclone V10 cord-free vacuum, at its big launch event in New York.

The company has been talking about its vision for the "healthy home", which refers to what Dyson calls a "step change" in its air purification tech.

Like the previous generation, the Dyson Pure Cool tower and desktop sized fans can capture 99.95% of air particles as small as 0.1 microns, obliterating pollution from pets, candles, outside traffic, pollen, cleaning products and other nasties. However, this time around the Pure Cool uses 60% larger Glass HEPA filter and a separate carbon filter, which the company has boosted three fold over the previous generation.

The all-new Dyson Pure Cool features an LCD display on the fan itself, which shows a real-time assessment of the air quality in your home. Lasers inside fans measure the particles, and offer air quality readings. It can sense VOCs like from paint and candles, and NO2 from car pollution. There are also sensors for temperature and humidity, too. This is also listed in the Dyson Link smartphone app, alongside information on when you need to change the filters.

The new Dyson Pure Cool fans also turns through 350 degrees, which will help to purify the whole room faster. Dyson says that the new Pure Cool fans will pump 290 litres of air per second around your home, which is fairly impressive. It can also be set not to blow cold by diffusing air rather than projecting, which is a must-have for winter purifying.

The new Pure Cool fans also feature voice control via Amazon Alexa ŌĆō enabling you to use commands like ŌĆ£Alexa, ask Dyson to start purifyingŌĆØ and ŌĆ£Alexa, ask Dyson for the indoor air qualityŌĆØ. There's no word on Google Assistant functionality as yet ŌĆō and don't even mention Siri.

Alongside the new fans, Dyson also unveiled a new cord-free vacuum in New York. Perhaps more interestingly, the company has announced that itŌĆÖs to go cord-free on its full range of vacuums.

The Dyson Cyclone V10 aptly uses the V10 digital motor, and boasts 60 minutes run time and a 40% larger bin than its predecessors, and a jump of 20% better suction over the Dyson V8. ThereŌĆÖs also a sensor to detect blockages, which is a more than welcome addition.

Pre-orders start today before a launch at the end of the month. You can bag a Dyson Pure Cool desktop fan for ┬Ż399 with the floor standing tower available for ┬Ż499. The Dyson Cyclone V10 Animal will retail for ┬Ż399, rising to ┬Ż499 for the V10 Absolute and V10 Total Clean.