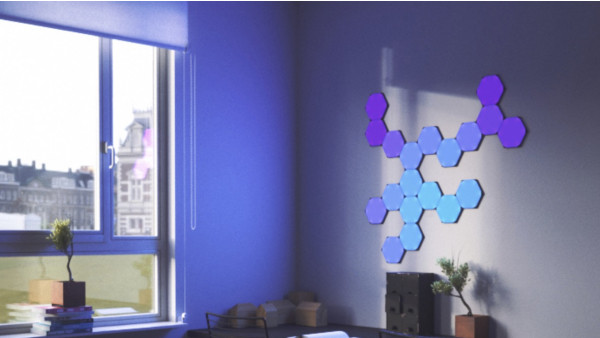 Nanoleaf was the originator of smart light panels, which you can arrange in a number of creative ways to give your home some added cool factor. It's done squares and triangles and competitors have followed.

But at CES 2019, it's adding a new shape to its arsenal: hexagons. The six sides allow for more combinations, which will let you come up with all sorts of crazy designs for your wall. They're also touch enabled, so you can tap on them to change colors and even play games on them (we'll get to that in a bit).

You can connect up to 500 hexagons per Control Hexagon, and you'll need extra power for each 25 hexagons. All of that means that you can cover your entire wall in these things. Nanoleaf isn't forgetting some of its older lights though.

It's also releasing some upgrades for the square Nanoleaf Canvas. There's now a mounting grid that will let you snap the squares in place a lot simpler. The Canvas, which is also touch enabled, is also going to gain the ability to play games.

You'll be able to play smart light versions of Whack-a-Mole, a take on Candy Crush called "Canvas Crunch", and Pacman. All of this is done with Nanoleaf's new Interactive Motions technology.

There's no word on pricing yet, but the hexagon will release in the fourth quarter of 2019 while the Canvas mounting grid will release in quarter three. It's not clear when the Interactive Motion games will arrive for the Canvas either.