We put the new Nanoleaf Bulb and Lightstrip to the test 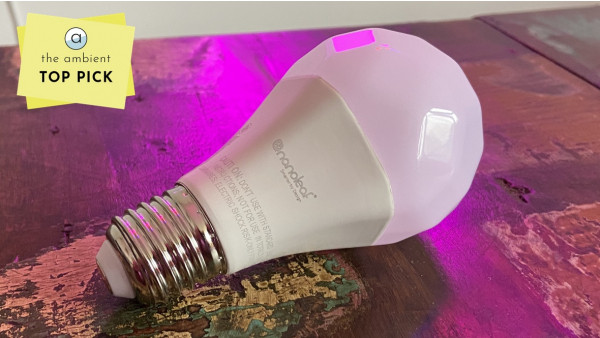 At the tail end of last year, the Nanoleaf Essentials range went live; a smart light bulb and smart lightstrip duo that both have Thread connectivity built in.

Consisting of the Essentials Bulb and the Essentials Lightstrip, the new Nanoleaf range is a big deal given that the HomePod Mini launched around the same time, with a Thread Radio built in; Apple's diddy smart speaker can act as a Thread border router for the new smart lights.

The reason that Thread is a big selling point is that, unlike Bluetooth or Wi-Fi - which Apple's HomeKit smart home system currently uses - Thread should provide more instant results when it comes to smart lighting.

Explained: What is Thread and why does it matter for your smart home

"Bluetooth was inherently not the greatest solution for smart home products, mainly because of the connection time," Nanoleaf's CEO Gimmy Chu told to The Ambient at the time of the Essentials launch.

"Like you don't really care when you're using Bluetooth headphones, because it's takes a whole like three seconds to pair, then you're like, ŌĆśOkay, all right, it works, I'm streaming audio to my ears.ŌĆÖ But with smart home products, that three seconds is annoying."

In theory, the new Nanoleaf Essential smart lights decide what is the best route to take in terms of connectivity within a HomeKit setup - there's no need for the user to even think about it.

"It all happens in the background," explained Chu. "HomeKit takes care of all that. So, we say that in technical terms, it uses Thread with Bluetooth call-back; like if the Thread connection fails, then it'll fall back to Bluetooth.

"But to the end consumer all they see is they changed the color of the light. The light changed."

But do the devices live up to the hype and how do they perform outside of a HomePod Thread setup?

I've been living with the Bulb and the Lightstrip for the past couple of months - here's what you need to know.

That funky looking lightbulb above is the Nanoleaf Essentials Bulb (A19/A60) - which is a Rhombicosidodecahedron shape, in case you were wondering - is super bright one, with multiple color temperatures (2700K-6500K) and an 1100-lumen max brightness.

There are both screw and bayonet fittings available with this model and it is simply powered as per a regular dumb light bulb - i.e. you screw it into a light fitting and turn on the light switch.

The 2m Essential Lightstrip has 21 LED sets per meter (2 warm, 2 cool on each set), which can be cut and also be extended up to a maximum 10m.

It comes with a nice control switch, which you donŌĆÖt get with rival lightstrips, which features a power button, dimmer controls and a button that cycles through pre-set scenes.

Setup for the Lightstrip is as simple as peeling of the sticky covering on the back and placing it where you want it to live. Remember to make sure that the end you want attached to the control panel, and the power cord, is near the plug socket you will be using.

Those are pretty low price-points in the ever expanding world of smart lights. Philips Hue, by far the market leader, has its color light bulb on sale for $39.99 and it's Lightstrip starter kit is $79.99.

Nanoleaf Essentials: Threading in and out

Without doubt, the optimal setup for the Nanoleaf Essentials range is within Apple HomeKit - and an Apple HomeKit setup that uses the HomePod Mini (pictured above) as a Home Hub.

Without a HomePod Mini's Thread connectivity you are limiting yourself to Bluetooth connectivity, although you will still be able to access and control the lights remotely; provided you've got a permanent Apple Home Hub setup with an Apple TV, original HomePod or an iPad.

With this method you simply add the Essentials smart lights in the same way you would any other HomeKit compatible smart home device - i.e. scanning that HomeKit code on the box and following the steps in the app.

Not only does this method add the device to your Home setup, it'll automatically pull the light into your Nanoleaf setup, should you have one of those already setup for a Nanoleaf Canvas or other shape panel system.

Nanoleaf Essentials Lightstrip can create a great effect behind furniture

When used in tandem with a HomeKit Mini you'll get super snappy responses, much more than you're probably used to with Apple's smart home system, whether controlling from the app or using Siri as a voice assistant.

If you do want to use either the Essential Bulb or Lightstrip outside of Apple's smart home ecosystem, using an Android phone or tablet, for example, then you'll be reliant on that device being within Bluetooth range of the light.

And while it's also compatible with Google Assistant, that's also a Bluetooth only affair - Google does have Thread radios in some of its Home and Nest smart speakers and hubs but they haven't yet been activated for people to use.

You will get remote access though, in a Google Home setup, as long as your smart speaker is in range of the Essentials lights.

With both a HomeKit or Google Assistant system - and not dependent on Thread - is the ability to incorporate the Essentials lights within routines and automations.

It's not a complete success story on the HomeKit-front though, the Essentials lights do not support Apple's Adaptive Lighting feature.

Unveiled by Apple in June as part of the iOS 14 update, HomeKit Adaptive Lighting is a feature that can change the color temperature of smart lighting at different times of the day, and in real-time.

Nanoleaf does have an option within the native app to use its Circadian Lighting feature but it's no way as in-depth or intuitive as Apple's in house offering.

A word on the app and it's pretty basic but that's no deal breaker. It's easy enough to set colors and shades. Any heavy lifting though - timers, routines, automations and the like - you'll want to jump into the Home app (Apple or Google) for.

There's no Wi-Fi on board the Essentials, as per the Nanoleaf light panels and shapes that the company is more well known for.

Alexa is also conspicuous by its absence, which is a real shame.

Finally, if you used smart home buttons in the past such as Flic or Logitech with your Nanoleaf panels, you might find that these are incompatible with these new models.

However, HomeKit-focused smart buttons like those from Fibaro and Eve will have no problems incorporating the Essentials range.

Nanoleaf Essentials
The score I've given the Essentials range (and the highly coveted Top Pick status) is - and this is important - only if you're using the smart lights in a HomePod Mini, Thread-based, setup. They are perfectly good, affordable smart lights within a regular Android / Google Assistant system - and the design of the Bulb, in particular, sets it apart from its rivals but it's only if you use them to their full potential that you'll unlock lightning speeds, full remote access and the like. Within an Apple Home with Thread they are without rival at the moment though, although we expect that to change in the very near future.
PROS
CONS
TAGGED    smart lighting