The Netatmo Smart Door Lock brings back the key

Wi-Fi and motor free, the lock uses BLE and NFC and works with HomeKit 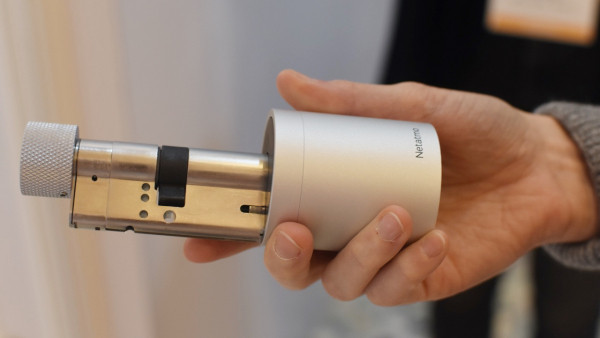 CES 2020 was the year of the smart door lock. You couldn't swing a robot cat around the show floor without knocking over 4 or 5 fake door posts. While there were some interesting innovations, there was also lot of same old same old: Wi-Fi enabled! Fingerprint unlock! Serious lack of any design chops! And then there was Netatmo.

The French smart home company is well-known for its alternative approaches to IOT innovation, some successful some not so much. Now they're bucking the trend of controlling your door lock with a connected motor by opting for NFC keys. We didn't see that one coming.

UPDATED: The Netatmo Smart Video Doorbell is now on sale

"People donŌĆÖt want to change their habit," Heleen DeWaal of Netatmo told The Ambient at CES. "They're used to having their key and they donŌĆÖt want to have to use their smartphone to unlock their door."

But they still want the conveniences and added security smart door locks offer, she said. This includes being able to share access to friends and visitors remotely, and not having to leave a spare key under the front door mat.

We got to play with the lock at Netatmo's CES booth this week, and it's an impressive, substantial device. Very heavy and durable, it feels like a traditional lock, just bulkier and with a redesigned key slot, which protrudes slightly from the front of the door but is relatively unobtrusive. However, on the inside of the door the mechanism is big, sticking out quite far to accommodate four AA batteries.

The lock completely replaces your deadbolt and works in any European cylinder lock. It will only be available in Europe when it's released at the end of this year, and there are no plans for a US version. Pricing is still TBD but we heard numbers around Ōé¼350 and Ōé¼400 being bandied around. This would include 3 keys and you'd be able to buy an additional three-pack for Ōé¼100.

The standout feature here are these electronic keys. Each key has a Near Field Communication (NFC) chip in it that it uses to communicate locally with the lock.

The keys are made from stainless steel and resemble a traditional key but feel lighter and smoother. They come paired to the lock and each one essentially authorizes the door to unlock when the key is put in it. You can have as many locks as you want and use the same key for each.

The key is not mechanical - a tag would work in the same way - but the key form-factor is familiar and comfortable, presumably helping people make the leap from dumb lock to smart lock. What's smart about it is that you can deactivate the NFC chip remotely using Netatmo's Security smartphone app. So if someone has a key and you don't want them to get in anymore, just tap a button in the app.

You can also use the app to lock and unlock the door when you are within Bluetooth range. If you want to let someone in when you're not home you can't control the lock remotely but you can send a "digital" key to their smartphone.

You can't control the lock remotely because it's not connected to the internet. This could be a dealbreaker for some, but if you've put off buying a smart door lock because you don't like the idea of your lock being online, this is a great solution.

Local control and not being dependent on the cloud is sort of Netatmo's thing, so this move makes a lot of sense for them, even if this strong focus on privacy compromises some features.

As for security, the lock is designed to withstand both physical and electronic attacks and has A2P, BZ+ and SKG security certifications, making it among the most secure locks in Europe. An accelerometer in the lock triggers a built-in siren if somebody tampers with it.

With no motorization or Wi-Fi the lock doesn't need much power and requires just 4 AA batteries, Netatmo says they will last about 2 years, four times as long as most of the competition.

The app sends alerts to remind you to change the batteries when they're low, but the keys will not work should the batteries die. The backup option is a micro-USB cable to charge a small internal battery up just enough to get you access.

Interestingly, the lock does not send alerts to the app when it's locked or unlocked. "According to the focus groups we did, people donŌĆÖt like notifications about their family's coming and goings," DeWaal said. "It feels like spying to them."

However, if you wanted this feature you could get it by paring the lock to HomeKit, plus there is a timeline of door events in the Netatmo app.

HomeKit compatibility is another selling point here, you can integrate the lock into scenes and do things like have your lights come on and your thermostat adjust when you unlock the door.

HomeKit will also give you remote control over the lock from outside the house, assuming you have a HomeKit hub and it is within Bluetooth range of your door.

Netatmo was showing the door lock off alongside its doorbell, which was announced at CES last year and still has not shipped.

Netatmo told us there's currently no integration between the lock and the doorbell camera. Both products are due to ship later this year, the lock is EU only, but the doorbell will also be available in the US.