The new Echo Show 10 is available to pre-order: Shipping 25 February

Pan, tilt, zoom, this smart display is made for moving, and there's Netflix! 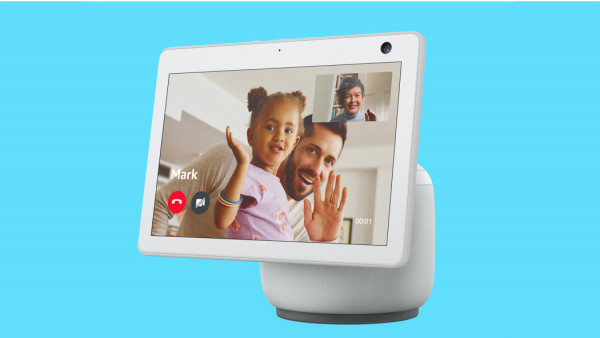 Amazon Alexa's flagship smart display got a big upgrade at Amazon's annual Devices and Services event back in September 2020 and now it's available to pre-order, with shipping starting on 25 February.

The new Echo Show 10 not only boasts an improved HD display and a better speaker - featuring dual, front-firing tweeters and a powerful woofer - but it's also got some moves.

That's right, the Show 10 can pan, tilt, and zoom, keeping you in frame wherever you are in the room thanks to a silent brushless motor and a new AZ1 neural processor that can recognize the form of a human body (different from the facial recognition the Google Nest Hub Max employs for a similar feature).

This means it will physically pan and digitally zoom to keep you in the frame of the camera while on a video call, or keep the screen in your vision if you're following a recipe while moving around the kitchen. This neat trick is similar to the literally only decent feature of the Facebook Portal device, which uses a digital pan and zoom to stay on you during video calls.

With the Show 10 you can now chat with grandma while you make dinner, or have a girls night with friends while relaxing on the couch - no need to hold up your phone or have your laptop in front of you. (Group calling is coming soon with Amazon's new Chime video conferencing skill, as is support for Zoom, Skype is already live.)

The Echo Show 10 costs $249 and replaces the slightly long in the tooth Echo Show, which launched in 2018, joining the lineup as the biggest sibling out of the Echo Show 5 and Echo Show 8, the numbers all indicating screen size.

Hardware features include a 13 megapixel camera, the motorized automatic swivel and a manual tilt function, as well as radios for Zigbee, Bluetooth LE, and AmazonŌĆÖs Sidewalk network, making it a fully-fledged smart home hub (minus Z-Wave, although you can pair it to a SmartThings hub or Ring Alarm to connect Z-Wave devices).

There is also a physical privacy shutter for the camera, and you can turn off the motion feature with your voice if you want it to stop following you around.

You can use all the regular Alexa features here, too, including Drop In. And the camera will work as a security cam to check in on the dog, you can even remotely rotate the screen to take a look around the room.

It also works with Alexa Guard and will periodically pan around the room when Away Mode is activated, checking to a see if person in its field of view, and alerting you via the Alexa app if it spots someone.

You can expect lots of cool features to come to the device as well, as Amazon has released motion and sensing APIs to developers so they can create skills using the Show 10's unique features.