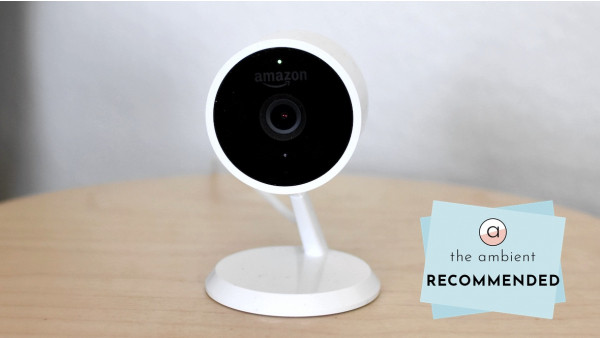 Amazon owns two companies that specialise in smart home security cameras: Ring, which makes everything from video doorbells to security systems; and Blink, which is entirely focused on those smart cams.

But that didn't stop Amazon from creating a little smart camera of its own ŌĆō the Amazon Cloud Cam. This one prioritises ease of use and easy integration into the Alexa ecosystem over everything else, but at its core does many of the same things.

But is jumping into an Amazon-only security camera worth it? And what are you missing out on compared to the bevy of other security cameras out there? Here's our full verdict.

The Cloud Cam bears a lot of resemblance to a security camera from another smart home giant, Nest's Cam IQ. Amazon's has a similarly appealing no-frills design with a small-ish head on a swivel attached to the base.

The Cloud Cam's base has a rubber underneath that'll keep it place on your counter or coffee table, so you won't have to worry too much about it sliding around or getting knocked over ŌĆō particularly good in homes where kids and animals run amok.

There's also a mounting bracket that you can use to attach the Cloud Cam to the wall if you want to put it out of reach or give it a higher angle. On the front, you'll see the camera lens, and Amazon logo and a green LED that denotes the Cloud Cam is recording.

Setup on the Cloud Cam, like most Amazon products, is pretty easy. You don't set it up through the Alexa app though, but the Cloud Cam app. Yup, it's a separate thing you'll have to download. From there, you just have to plug the Cloud Cam into the wall and its LED will blink when it's ready to set up.

Open up the Cloud Cam and input your Amazon credentials. The app will have you add your Wi-Fi network and you'll be up and running in a couple of minutes. Despite the need for another app it's very straightforward, and there's no installation necessary unless you want to use the wall mount. For that, there's a mounting kit included in the box.

The Cloud Cam may be tiny, but it's packed with a good number of features. All of this is built around its 1080p video, which has proven nice and sharp in testing. When you're viewing it in the Cloud Cam app, there's also very little lag when you're trying to pull up clips.

That's better than what we've sometimes experienced in the Ring app, especially when it comes to its video doorbells. You can both save and share those video clips pretty easily too. While the Cloud Cam is always watching, the clips are quartered off on a number of different scenarios.

As this is an Amazon product, you've also got some Alexa integration. Specifically, Alexa notifications are here. So if your camera picks something up, it'll hit up your Echo device with a notification. Then you can say, "Alexa, what are my notifications?" to see what's up. You can also command Alexa to show your camera's stream on your Echo Show, Fire TV, Fire Tablet, or Echo Spot. You can also use those devices to speak through the Cloud Cam, using it as a two-way radio.

There's both motion and person detection offered here. We've found the motion detection to be incredibly sensitive. We used the Cloud Cam during a fumigation, for instance, and a slight amount of wind would set it off over and over and over again. It got so bad we had to turn off app notifications. You can tweak the sensitivity in the settings, and chances are you'll have to.

There's also person detection, so if a human walks into the frame it'll start recording instantly. That works really well. There are also motion zones you can set up within the app, so it'll only start recording when something happens in that zone. Other options include home/away modes, so it'll turn on when you leave the house, for instance. Schedules are what they sound like: You can set up time frames when the camera will turn on and off ŌĆō so your camera can turn on when it's past 1am.

What is particularly good is the night vision mode, which uses LED lights and infrared to give you a look when it's too dark. We used this during our fumigation, to keep an eye on our home while we were away for a couple of days. We could just pop open the app and take a peek. We were able to see everything really well.

Audio detection will listen out for specific sounds and alert you when it hears them. For instance, if you've got a camera set up in your baby's room and it hears a cry, it'll let you know. It can also be set up for barking dogs, breaking glass and your smoke alarm.

There's also Amazon Key, a service exclusive to Amazon Prime members in select cities. It basically allows Amazon delivery people to enter your home and leave your packages inside. You'll need the Amazon Key edition of the Cloud Cam plus a compatible Amazon Key smart lock. The Amazon deliverer has a virtual key to your Amazon Key lock, and as soon as they enter your home your Amazon Key Cloud Cam will turn on and start recording, letting you know that they're in your home. You can then monitor and talk to them until they leave and your door locks again.

If you're in the Amazon ecosystem, you're probably very used to the Alexa app. It's been your one-stop shop for everything in the Amazon smart home world. Except for the Cloud Cam, which uses the totally separate Cloud Cam app.

The app is pretty spartan. The home screen is nothing but a live feed of your camera and a long list of its recordings, which are triggered by motion, person and audio detection. You can click on these and choose to save or share them.

If you click on the live video feed, you'll see a microphone icon that you can tap and hold. When you do this, you can then use the Cloud Cam as a two-way radio. You can speak into it and to anyone in the room the cam is in. This is helpful for scaring away burglars, soothing a baby or child that you're on the way, or even just announcing that dinner is ready.

In the settings, there are a number of ways to customise what you can do with the Cloud Cam. You'll be able to turn on person detection. You can choose between a number of audio detection cues, from a crying baby to breaking glass to carbon monoxide alarms.

You can also set up your zones by dragging fingers onto the video ŌĆō simple stuff. Likewise, you can arrange your schedules and turn night vision on or off. The only thing you can't do is subscribe to a Cloud Cam premium plan ŌĆō at least on iOS. This is likely to avoid Apple's 30% App Store cut. So you'll have to zip on over to Amazon.com to subscribe.

Amazon Cloud Cam
The Amazon Cloud Cam is a pretty simple device. Without a subscription plan it's pretty spartan, but it gains a whole lot of functionality with a plan. At least the plan supports multiple cameras, unlike Nest Aware, which you need to get for each and every camera you own. Good quality video, easy setup and tight integration with Alexa make the Cloud Cam a worthy entry in the security cam game.
PROS
CONS
TAGGED    security cameras    amazon alexa