It's got the sound, but does it have the smarts? 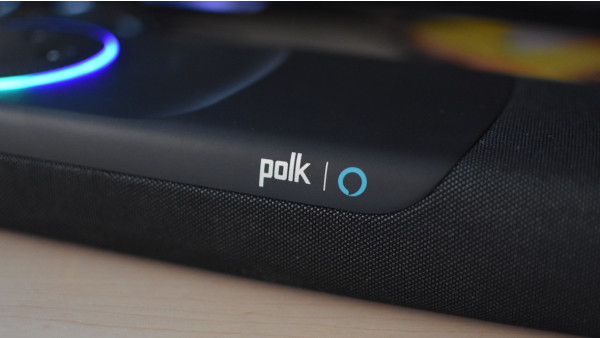 Most built-in speakers on TVs are trash, yet setting up a full surround sound system can be a complicated affair. Sound bars offer a good middle ground, providing much improved sound with simpler setup.

They also happen to be a pretty good option to place a voice assistant, as they act as an audio hub of your home entertainment setup. The Sonos Beam might've stolen away all the attention as an Alexa-enabled sound bar, but the Polk Command Bar comes in at $100 less ŌĆō and with a subwoofer to boot.

So is the Polk Command Bar a better buy? Can it take the crown as the smart sound bar to beat? Let's find out.

The first thing you'll notice about the Polk Command Bar is that it looks like Polk literally drilled a hole in a soundbar and put an Echo Dot inside. You definitely won't forget that Alexa is built into this device, as the iconic bluish-green light ring is here in all its glory.

The second thing you'll notice about the Command Bar is that it is long. It's 43 inches long, much longer than the 26-inch Sonos Beam. The Command Bar is so long that it actually didn't fit on my entertainment cabinet, and is even wider than my 43-inch TV. Plus, there's that giant subwoofer that you have to install to get bass-heavy sound.

The bar itself is a little bland. I hate to go on about it, but the Command Bar really does look like an Echo Dot sitting in a mesh-covered canoe. It is hilariously goofy, but you won't care when you're listening to the thing. The subwoofer is big and plasticky, but it's something of a necessary evil.

As for the ports, there's HDMI ARC to get you set up with your TV. There's also an optical cable if your TV doesn't support ARC. There are two additional HDMI 2.2 ports with 4K HDR passthrough, and one of them is clearly marked for a Fire TV of some sort. It's designed with the Fire TV stick in mind, but I had no problems plugging in the more blocky Fire TV.

Oh, there's also a little remote that you can use to control the Command Bar. It includes quick buttons for all your sound modes, a volume adjust switch and a button to activate Alexa. It's fine, but you'll probably want to ignore it and use your regular remotes or Alexa to command things.

Setting up the Command Bar, however, was a pain. Connecting everything was easy, and you'll have to check your TV's settings to make sure you enable ARC support and such things. Standard stuff, but then you get to using the Command Bar's setup app and things take a frustrating turn.

You'll have to connect to your Command Bar's setup Wi-Fi first, then connect it to your Wi-Fi. It sounds simple, but it just didn't work for me. Every time I tried to connect it to my Wi-Fi it would fail and make me set it up again. It must have taken me at least 20 minutes to make happen, and it only worked once I deleted the app and reinstalled it.

There is a weird thing that happens. The instructions for the Command Bar tell you to enable the Polk Command Bar skill, but there appears to be no such skill available. I've looked in the Alexa app, I've asked Alexa and nothing. Alexa still controlled the Command Bar fine, but it was a weird occurrence nonetheless. The one seamless thing was setting up the subwoofer, which is wireless and paired as soon as I plugged it into the power outlets.

The Command Bar is packed with two mid/woofers and two tweeters, but they're placed way on the outside of the speaker in an attempt to get that sound away from the microphones in the centre. There's also that 6.5-inch subwoofer.

All of this results in wonderful audio when you're listening to movies and TV shows, despite it just being a 2.1-channel sound bar. Dialogue is crisp and background sound effects are sharp. Best of all, if you're listening to an action movie with plenty of explosives then that subwoofer provides a good amount of room-shaking bass.

The bass is also helpful during sporting events, like when I was watching an Arsenal Football Club match and the crowd went wild after a goal from old Danny Welbeck. The Command Bar also has a sports mode, which essentially amplifies things like crowd noise.

Where it doesn't do so well is with music. I put on Dua Lipa's One Kiss and while it didn't come across as terrible it was a little too bass heavy, especially when compared to something like the Sonos Play:1.

The Command Bar playing music actually reminds me a little of early Beats by Dre headphones, where the bass kind of drowned out some of the more wonderful detail in the music. When you're listening in music mode, the bass will be turned down and the singing treble will rise up a bit. However, it still feels a little hollow and not as rich as it could be.

There's also a movie mode that makes dialogue a bit crisper and ups the bass for things like explosions or gunfire. It really adds a heft to everything you're hearing. I tested it with Avengers: Infinity War and at times it felt like I was hearing things I hadn't heard the first two times I saw it. Finally, there's a night mode that dulls heavier sounds like explosions so you don't wake up the neighbours.

Polk tuned the Command Bar to prioritise things like dialogue, and its Voice Adjust technology is aimed at making sure dialogue is crisp and clear. Mission accomplished there, though one reason why the Command Bar is so wide is because of the way all the audio channels are aligned. The two mid/woofers and tweeters are at the very end of the bar, on both wings. In the centre, the microphones for the Alexa part of the device are stored. In a way, it's kind of like an Alexa sandwich. Speakers, Alexa, speakers.

The Command Bar does a good job of filling the room with sound, even in a tough environment in my room. My TV is situated in the corner of the room pointed parallel to the wall, rather than diagonally across the room, and the same with the Command Bar.

While this created a blind spot in my room, it also meant that I could test how wide the sound goes. And, well, unless you're inside 5 degrees of the end of the speaker you're not going to have a problem. You're going to experience some good, rich immersive sound.

Alexa is where the Command Bar starts to feel finicky. There are definitely spots where it struggles to hear you. If you're directing in front of the Command Bar, there aren't any problems with voice detection. See, all the microphones are directly in the middle, while the speakers and mid/woofers are out at the ends.

It's when you're in other areas, toward the side and off-centre, that Alexa starts to not understand you as well. I got up to leave my room and commanded Alexa to pause my movie. I assumed it had heard me and took care of it, largely because the movie looked like it paused, but after I left the room the movie kept playing. Alexa playing games with my heart, or did it not understand what I said?

That's because of the way the Command Bar is constructed, with the microphones in the centre and the speakers on the wings. While the idea was to let the mics have enough space from the audio to hear you, if your voice is coming from the same direction as the audio Alexa won't hear you very well.

The great thing about Alexa on the Command Bar is that it has two inputs to play with. It's pretty quick to jump between HDMI 1 and HDMI 2. The second HDMI port is earmarked for Fire TV, but you don't need to follow that if you don't want to. The first input is intended for things like your cable box or game console.

You can also adjust the volume with Alexa, and switch between modes. However, you can't turn the TV on. Nothing will happen if you try. It's a bit of a bummer because Alexa can do the same with the Beam.

Unfortunately, Alexa's TV powers work best with Fire TV. I wish it would have worked as well with YouTube TV, to which I am a subscriber, or my Xbox, telling Alexa to start up Forza Motorsport. Instead, I can just ask Alexa to play The Grand Tour on Prime Video and Dear White People on Netflix.

One unfortunate thing is you can't add the Command Bar to your multi-room setup of Echo speakers. It totally lives on its own little island, which is another bummer. All of this helps make Alexa on the Command Bar more of a serviceable experience rather than a great one.

Polk Command Bar
The Command Bar isn't perfect. It's got very good sound, especially when you're watching TV shows and movies, and will make your room shake. It's not the greatest with music, setup can be annoying and Alexa can sometimes be wonky. However, for the price, the Command Bar is hard to say no to ŌĆō especially as it comes with a subwoofer, unlike the more expensive Beam.
PROS
CONS
TAGGED    smart speakers