Is Ring's cam all that illuminating? 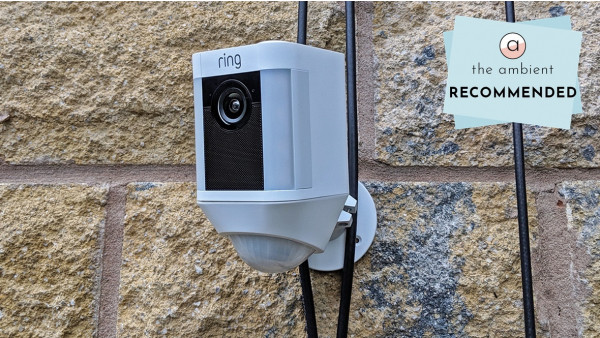 The Ambient is reader-powered. If you click through using links on the site, we may earn an affiliate commission. Learn more
David Nield
@davidnield
Friday

Setting up your own little home surveillance network is easier than it's ever been, with smart home security cameras from the likes of Arlo and Nest and many others packing in plenty of features for not much money at all.

Stick your camera on a wall or a shelf, get the app up and running, and hey presto ŌĆō you'll get automatic alerts every time something suspicious moves in front of the camera. It's smart and simple CCTV for the home.

Also in this increasingly crowded market is the Ring Spotlight Cam from the same (Amazon-owned) company that makes the video doorbells. There are actually two versions of the Spotlight Cam, the Battery one, which we've been testing out, and the Wired version. They're almost identical, albeit one has a wire and the other runs on batteries, but we'll get into the nitty gritty of the differences later.

So, what can the Spotlight Cam actually do? Well, it will buzz your phone every time it detects motion, and lets you view a live feed at any time, which is pretty much table stakes for these cameras nowadays. This being an Amazon product, you can of course use it with Alexa ŌĆō basically to send the feed to an Echo Show or a Fire TV device.

Captured motion events can be viewed through the phone app or by logging into the Ring portal on the web. There's no option to tune into the live feed through a web browser though, like you can with Nest and Arlo devices, which is a bit of a shame.

While marketed as an outdoor camera, it's only listed as "weather resistant" which doesn't fill us with confidence about it being able to survive the great British winter. What we can tell you is it survived a couple of nights of light rain with no adverse effects.

You've also got night vision capabilities here, and a loud 110-decibel siren, two-way audio, and ŌĆō as the device's name suggests ŌĆō two LED light strips that are bright enough to scare off trespassers without waking up the entire street with dazzling illuminations. The lights can be turned on manually or when motion is detected, whereas the siren can only be activated manually. We should also note that these lights are slightly brighter on the Wired version of the camera, which boasts 375 lumens next to the Battery's 300 lumens.

The Ring Spotlight Cam isn't the best-designed bit of hardware we've ever seen, but then you're not really going to be spending a lot of time looking at it. The mounting plate is sturdy and well built (you get screws and even a screwdriver included), but if you pick up the Cam Battery, the battery compartment feels a little flimsy.

We do like the two slots for two rechargeable batteries: you only need one battery, which is supplied with the camera, but if you decide to pay for another it means your camera can be using one battery while you're charging the other ŌĆō they slide easily out of the bottom so you don't have to move the device every time. You can get the camera in either a black or white casing.

Ring says the battery is good for between 6-12 months or 1,000 notification events. We noticed a drop of a couple of percentage points in a week, so that sounds about right overall.

On the software side, the Ring app is polished to a high standard, as you would expect considering the company has been in the video monitoring business for some time now. Setting up the camera and accessing its various features is all very straightforward and should only take you a few minutes.

Setting motion zones is refreshingly easy too: the camera's 140-degree field of view is split up into three 'chunks' that you can enable or disable as required, and there's a distance slider that lets you refine the motion zone further. All very easy to do: not as detailed as the custom motion zones available on some other cameras, but quicker to configure.

When you're tuned into a live view of the camera, you can activate the two-way audio, turn on the lights, and sound the siren if you need to. All the motion detection events that the camera has captured are available to review too, if you've got a Ring Protect Plan (see below for more on this).

The Spotlight Cam Battery sticks to 1080p HD video, even though some of its rivals have made the jump to 4K. Whether you actually need 4K resolution on a security camera is debatable, unless you're making a wildlife documentary about the comings and goings in your back garden.

Video quality is fine, with more than enough detail to tell what's going on outside your house (check the photos and video we're included here for details). It doesn't have the sharpness to be able to really identify faces from more than a few feet away, but for general purpose monitoring it's all you need.

The night vision mode isn't particularly impressive ŌĆō it doesn't have the clarity of something like a Nest Cam, for example ŌĆō but it's enough to see what's going on in a small area, and while the LED lights aren't particularly bright they can give you a better idea of what's happening out there.

We were impressed with the motion detection, where you've got three levels of sensitivity to choose from. The medium level was enough to ignore waving trees and passing clouds, while still alerting us about squirrels and birds; on the least sensitive level, however, small animals were ignored but passing humans were not. That seems to be the best option if you don't want your phone vibrating every five minutes.

Perhaps the biggest difference with the Wired version of the camera is that it offers something called Advanced Motion Detection, which relies on the camera rather than heat signatures to detect people. It's more power-intensive, hence only being available on the Wired model, and a bit more accurate.

Like many of its competitors, the Ring Spotlight Cam comes with an optional cloud subscription. If you want to store recordings in the cloud ŌĆō rather than just see a live feed and motion alert events as they happen ŌĆō you'll need one.

You get a free trial of the service for 30 days so you can see how it works, and after that you need to pay Ring ┬Ż2.50 a month or ┬Ż25 for the whole year (and that's per camera, so if you need to add another it's another subscription fee). That's a reasonable price and undercuts a lot of the competition.

We certainly found the clip archiving and access worked well during our free trial of the Ring Protect Plan, and you're definitely going to get your money's worth if you sign up for it. We would've liked a local storage option as well, but having your camera out in the elements makes that harder to implement.

The clips stored by the Ring Protect Plan can be accessed from the web or from your phone, though oddly enough you can only download them on your phone ŌĆō not a huge problem but something to bear in mind if you want to create an archive.

Ring Spotlight Cam
While the Ring Spotlight Cam doesn't really excel in any particular area ŌĆō video quality, design, features ŌĆō it does the job well enough in all of these categories, bundling a whole lot of functionality (lights, siren, night vision, motion detection) into one reasonably priced package that won't let you down. It's going to appeal most to those who don't want to wire up a camera outside and who already own other Ring and Alexa-enabled devices.
PROS
CONS
TAGGED    security cameras