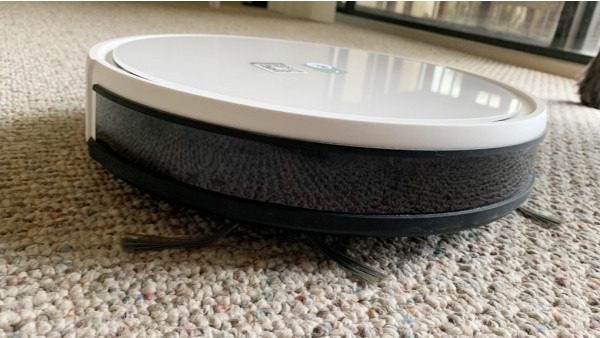 High-end vacuum robots with smart mapping features and self-emptying abilities are cool and all, but if you don't fancy dropping upwards of $600 on a floor cleaner, there are plenty of decent, get-the-job-done bots that won't break the bank.

We've been testing one of the cheapest, the Yeedi K650, whose stand out features include a whopping 800ml dustbin, 2000Pa of suction power, over two hours of battery life, and a sub-$200 price point. (In the UK, it also mops!)

This easy-to-use, basic vacuum bot can't remember where it's been, doesn't have turbo boost or any special cleaning prowess, and you can forget about LIDAR. But it's super quiet, runs forever, has four suction levels, and can climb over thresholds as high as 0.71 inches.

Plus, thanks to built-in Wi-Fi, you can control it with an app or your voice using Alexa. Throw in that bin, which is close to double the size of any other vacuum robot we've tested, and you've got a hardworking robot vacuum that gets the job done with less mess on your hands.

Of course, the Wyze vacuum robot coming next year to the US will throw all this off. That $249 bot packs high-end features like LIDAR and smart mapping usually only found on cleaners twice the price. But for now, if you're looking for the cheapest floor cleaner that will get the job done, the Yeedi is worth your consideration.

We've been testing out the Yeedi K650 for a little over a week, read on for our full review.

The Yeedi is notable for its bright appearance, sporting a spiffy glossy white look in a sea of black and grey robots. It also has pastel green accents, and other models in the lineup feature pops of pink, making this a nice looking bot if your home's color scheme is more bright and airy.

It fit right into the tropical Florida beach house we were testing it in.

An anti-scratch, tempered glass top keeps the robot looking smart, and in a week of rather grueling testing the white body showed no signs of dirt or debris,

To make room for its big 800ml bin the Yeedi is large - 6.9-inch wide. And at 3.1 inches high, it's a bit taller than most slimline robot vacs, but still small enough to get under most furniture.

Underneath, the Yeedi sports a regular sized bristle roller brush, but comes with a rubber, tangle free option you can swap out (recommended if you have pets), anti-drop sensors, and two very large side sweeping brushes that give it a spider like appearance as it trundles around your home.

It also has two large wheels that are impressive at navigating obstacles, making it over the threshold of a sliding glass door into a sunroom and back with ease.

A very large bumper at the front helps it navigate by slowly bumping into objects, aided by anti-collision sensors that reduce its speed as it approaches objects.

There is one button on top of the bot to start and stop it, and an on/off switch on the side, plus a reset button.

Yeedi K650: Features and everyday use

This is a bare-bones, bump-and-roll bot, navigating by just randomly rolling around and bouncing off obstructions like walls.

Its features are minimal, but thanks to Wi-Fi connectivity to the Yeedi app you can set schedules, change suction power (quiet, standard, max, and max+), view a cleaning log, and choose from 3 vacuuming modes - Edge, Auto or Spot.

There's no remote control (which some Yeedi models offer), but you can start and stop the robot just using the button on the top, or voice control through Alexa (no Google Assistant).

If you use the app to start a clean you get more control, such as the option to set the suction power and choose the mode before sending the robot off.

Auto mode is the main option, and it will send the robot off to clean in a bump-and-go-style pattern all around the house, coming back to the dock when it's low on battery.

This method worked fine although it did miss sections, and as there is no smart mapping it won't return to those areas once it's recharged. If you need to be sure it'll do a certain room you'll want to put it in there and shut the door.

It cleaned fairly well on Standard power, picking up most of the pet hair and plenty of dust, but it didn't have the power for larger items like cheerios and bits of leaves. However, on Max + (where there is a notable increase in noise) it was able to tackle these items with no problems.

The Edge cleaning feature is a neat idea, the robot will set out and just follow the edges of your home - which after all is where much of the dirt seems to gather.

However, in practice it wasn't all that good at finding the edges - often ignoring the baseboards and instead running along the edges of sofas - even the back of our sleeping dog at one point (see video).

Spot cleaning worked fine, with the bot circling around a few times on high power, before stopping

Noise-wise this bot is really quiet - impressively so. Even on the louder Max + setting it was quiet enough to still hear the TV.

On the Quiet setting (56db) you could easily run this in a bedroom and not wake someone up, but on that level it didn't really make a noticeable impression on dirt.

One downside however, is battery life. Although it claims 130 mins of runtime, in our testing it never ran for more than 60 minutes before returning to charge, no matter which power setting we had it on.

The big bin is the big bonus here, we only had to empty it once in our week of testing - and we ran the bot twice a day in an 800 sq. ft. carpeted apartment with a large hairy dog and three people in residence (two with long hair).

We never actually got a full bin notification - and it doesn't seem like there is one - but it's simple to pop the bin out and see how full it is.

It's also easy to empty as its clamshell design means it opens nice and wide so there's no need to dig your fingers in to get at the debris.

An included cleaning brush is attached to the bin for dusting off the replaceable filter (it comes with a spare), and the whole bin can be washed out with water.

The cleaning brush has a cutting tool for freeing trapped hair from the bristle brush, but the rubber roller brush rarely, if ever, needed cleaning as it did a great job of not getting tangled. Although we preferred the bristle brush for carpet.

The main feature we sorely missed here is keep out zones. You can't set them in the the app (no smart mapping) and you have to buy magnetic boundary strips if you need to stop it going somewhere (none are included).

The reason this was a problem is mainly because Yeedi doesn't deal with cables well. It does a great job of not running into pretty much everything else thanks to its anti-collision sensors, but cables are its nemesis, so unless you cordon cable-filled areas off, it will run into trouble.

As there aren't a lot of features the app is pretty easy to use, although connectivity can be spotty.

The app opens to a screen when you can quick start the bot or view the cleaning log. You can then tap into the main screen and choose from Auto, Edge or Spot cleaning, or dive into the settings to adjust suction power and such.

The scheduling feature allows for multiple start times, but you can only schedule Auto Cleaning (not Edge) and you can't choose the suction power, presumably it runs at whichever power was last set.

There's also a Find My Robot button to have the Yeedi call out "I'm here" if you've lost it, and you can do things like turn off voice prompts (it tells you when it's starting a clean, charging, or if it's stuck), view accessories usage, and set a Do Not Disturb period.

You can connect Yeedi to Alexa but the commands are limited to: "Alexa, turn Yeedi off," "Alexa turn Yeedi on," and "Alexa set Yeedi to charge." There's no Google Assistant integration.

Yeedi K650
Yeedi's huge bin and low price are its top features. The large capacity means you empty it half as often as others, so you're getting more cleaning for your money. It's also an excellent option if you have pets, as it can fit a lot of dog hair in that 800 ml capacity bin. But its cleaning prowess is hampered by a lack of smart mapping - making this a good fit for small apartments or as a robot to keep on a second floor where there are only a couple of rooms it needs to tackle. It would be especially good in and around bedrooms as it's really quiet.
PROS
CONS
TAGGED    robot vacuums