We help you decide which is best for your smart home 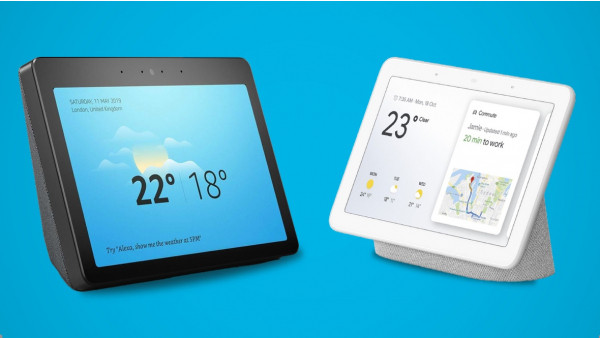 Though smart speakers started as cylindrical beasts activated only by voice, their smart display cousins aim to offer a little more interaction - and two of the best are the Google Home Hub and the Amazon Echo Show.

The Home Hub is Google's flagship device in its Smart Display range, and launched last year, while Amazon's Echo Show blazed the trail for the space back in 2017 and is now in its second generation.

However, is Home Hub or the Echo Show better for your smart home? We've lived with both, and below we'll be going through the design, features and price of the two smart displays to help you decide.

If you remember the design of the original Echo Show, you'll know how much of an upgrade the second generation (released in October 2018) is on the eye. However, the smaller Home Hub also fits neatly into kitchens, bedside tables and around the home - so, how do they compare on the spec sheet?

Well, while both have a mesh backing, the Home Hub feels more like a tablet plastered onto a stand, while the Echo Show comes as one built unit. At 246 x 174 x 107mm, the latter isn't overbearing - especially when you consider 10.1-inches of that real estate is made up by the Full HD display - though it is considerably bigger than the Hub, which comes in at 179 x 118 x 67mm.

The 7-inch screen of the device isn't quite as good for watching things on - however, with a resolution of 1024 x 600, it's no slouch if you just want to quickly check out a movie trailer, admire your pictures or something similar.

(The Google Home Hub comes with a sand, aqua, charcoal or chalk stand)

Interestingly, on a privacy note, the Show features a 5-megapixel camera above the screen, while the Home Hub instead foregoes a front-facing snapper. If you do want a Google Smart Display with a camera, take a look at the Lenovo Smart Display - it even lets you hide it, unlike the Show.

Why no camera on Hub? Well, Google likely wanted to avoid the same reaction that the Facebook Portal ended up receiving, and wanted to make its display as accessible as possible. And, so, that mark you see above the screen on the Hub isn't a camera, it's an Ambient EQ light sensor, something that's used to match the screen color and brightness to its surroundings.

That also extends to nighttime, though both are able to have their display shut off, too - perfect for if you want to place them in a bedroom.

While you likely already have an idea about which you'll prefer the look of in your home, there's a wealth of difference in the features of both these smart displays - not least the obvious one, that one runs on Alexa, and the other through Google Assistant.

This may not necessarily sound like a big deal on the surface, since many of the basic interactions with your smart display run true no matter the ecosystem, but those already embedded into either should probably stick with the voice assistant they know.

If it's your first dive into either, know that both of these devices have the potential to be the commander of your smart home. Google's does this through the Home View feature, which lets you drag from the top of the screen and control all your connected smart home gadgets at a touch. It's great for, say, if you want to turn off lights upstairs, or pause the music in another room.

The same kind of control over Routines and Groups is allowed through the Show, and it even goes a step further as a smart home hub, with Amazon opting to add a Zigbee chip inside, just like with the Echo Plus. This means that Zigbee-compatible smart home products (like Philips Hue) can be without using their native apps/hubs - very handy. Google is catching up through things like built-in Nest integration, but it still loses out in this area.

Read next: How to use YouTube on the Amazon Echo Show

Two key areas it doesn't, though, is through photo and YouTube support. While the Google-owned streaming giant is soon returning Amazon Fire devices (with Amazon Prime Video coming to Home Hub in the other direction), it still won't be appearing on the Show. And even though there is a hassle-filled way to get around this issue, there's no getting around the fact that Google Photos support makes the Hub a much nicer display to look at. The Echo Show obviously has Prime Photos in its locker, but, well, who cares about Prime Photos?

Aside from that, most of the other differences come from the change in ecosystem. Both will give you readouts of the weather, your calendar and timers, just in slightly different ways.

Sound quality may not be your priority here - or, at least, it probably shouldn't be - but it's still worth pointing out the differences between these two.

With the Home Hub, we'd say it's music playing abilities stack up pretty well, considering the size. It's got a little more bass than the Home and Home Mini, but, naturally, it's not got the premium quality of something like the Home Max.

And, when you start playing at louder volumes, its deficiencies become pretty obvious. Still, it's good enough for those who'll just want a Spotify playlist running while they cook, or the radio on while they get ready for work. And, if you decide it's not good enough, you can always pair it to a better speaker with Bluetooth, or group it with another Home or Chromecast device.

Does the Echo Show have it beat? Just about, we'd say, though there's not a whole lot of difference; certainly not enough to make it a decisive factor in the wider battle between the two. In our testing, we've just found that, thanks to its dual 2-inch drivers and the passive bass radiator, it's able to fill a room more easily - and there's big bass thanks to that hefty rear section.

Price is naturally a big factor in your decision to back either speaker here, and it's important to know just how big the difference is between the two.

Currently, the Home Hub is one of Google's biggest smart home sellers - and is also currently available for $119. In contrast, the second-gen Echo Show is more expensive, available for $179.99.

The Amazon Echo Show and Google Home Hub are both great additions to any smart home, and deciding which is best largely depends on your circumstance.

We'd say that the Google Home Hub is better than the Amazon Echo Show for the most part, though the latter will still be a better fit for those, for example, that want Zigbee device control or want to live in the Alexa ecosystem.

However, due to its cleaner design, excellent value for money, decent sound performance and privacy considerations, the Home Hub edges out the Echo Show - for now.