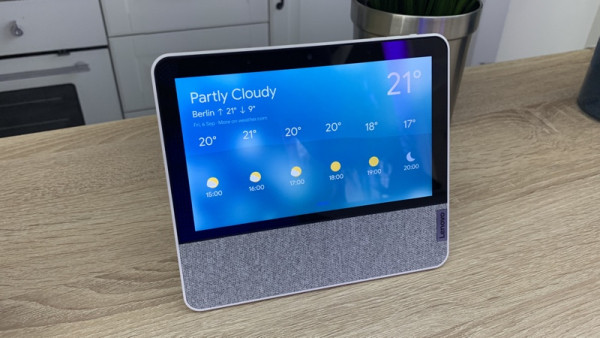 The Lenovo Smart Display 7, unveiled at IFA 2019 and due to hit shops in October, was clearly launched to solve the problem of the Chinese company's previous Google Assistant Smart Display.

The Lenovo Smart Clock is a great little device (hence getting one of our 'Recommended' badges in our review), but it's just too small to be used as anything other than a smart alarm clock. Unlike the Nest Hub, Amazon's Echo Show, or even the Facebook Portal, it was never going to cut the mustard anywhere other than a bedside cabinet.

Read this: The best smart displays

Hence the introduction of the Lenovo Smart Display 7, which ŌĆō as the name suggests ŌĆō comes with a 7-inch (1024 x 700 resolution) screen. It's not super HD, sure, but for what it's essentially going to be used for ŌĆō offering up extra display info for everyday smart assistant queries ŌĆō it's more than passable.

Lenovo had it set up in a mock living room over in Berlin at IFA, and the display held up okay despite the extra bright show-floor lights. I watched a couple of YouTube videos on it, did a few weather-based queries, and fired up a tune using Spotify ŌĆō everything displayed on screen was plenty crisp and clear.

Also, despite it being a pretty (unnaturally) noisy environment at the Berlin Messe, I didn't experience any issues with the Assistant not reacting to a "Hey Google" voice prompt.

The sound was pretty good too, from the two 5W speakers and passive radiator. It's not going to be your room's main speaker but, for the odd bit of YouTube-ing or the occasional music video, it'd be fine.

Unlike the Nest Hub there's a front-facing 2MP camera for video calls. On the back you'll find a mute switch for turning the Google Assistant mic off.

In terms of looks, it's a bit like the Facebook Portal, with the speaker up front below the display. However, it's nicer looking than Zuck's spy machine, with the speaker grill covered with a nice-looking fabric.

The smart display speaker market is booming right now and there are an increasing number of shapes and sizes to choose from.

The Smart Display 7 isn't groundbreaking in any way and offers nothing but mediocre performance from a mid-range spec sheet. But for $129.99, that's not a bad thing.

It's not a smart display you'll use for watching blockbuster movies. And you wouldn't want to listen to anything other than background music on it. But it'll probably do just fine in a kitchen or hallway as a digital assistant that gives you a bit more feedback than just Google Assistant's voice.

It goes on sale in October, so check back for our full review soon.