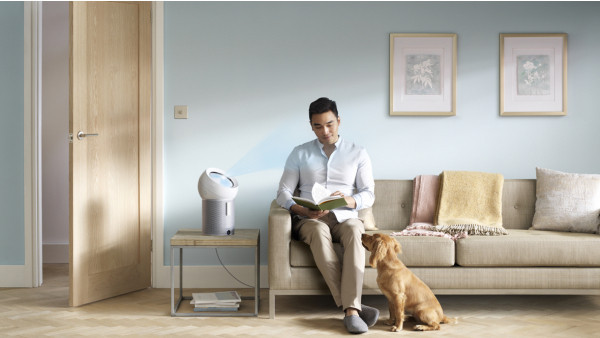 Dyson has unveiled a trio of new devices, all built with your health and wellbeing in mind - yes, even the new vacuum cleaner.

That new sucker, the V11 cord-free, was revealed alongside two new form factors from the British engineering specialist: the Dyson Pure Cool Me and the Dyson Lightcycle.

Let's start with the latter, as itŌĆÖs arguably the most exciting launch from Dyson in years, and born out of Jake DysonŌĆÖs (JamesŌĆÖ sonŌĆÖs) smart lighting division. The Lightcycle is focused on personal lighting and is not only concerned with the time of day and the activity itŌĆÖs supposed to be lighting, but also the userŌĆÖs age.

Read this: The best air quality monitors for your home

Dyson says itŌĆÖs designed to improve visual acuity and provide the right light for the time of day. There are built in, algorithm-powered cycles that will mimic the local daylight of wherever you are in the world; you can set your home city in the companion app.

The smart lamp - which can be also be controlled by that app, or on the device itself - comes in both desk and floor stand variations. WeŌĆÖve actually had a play with the Lightcycle at the London launch event and the on-device touch controls are incredibly intuitive.

The three warm and three cool LEDs on board offer a temperature range of 2700 to 6500 Kelvin, and feature a unique cooling method inside the main arm of the lamp to prevent overheating. Dyson says these LEDs will be good for 60 years. It's also got a USB-C port so you can charge your tech from it too.

The Pure Cool Me is born out of the same division that has been responsible for a couple of office favourites here at Ambient Towers, such as the Pure Hot+Cool and the Pure Cool.

Unlike those two smart air purifiers though, the new model - which offers a unique ball touch panel to change the air flowŌĆÖs direction - the Pure Cool Me isnŌĆÖt app-connected.

ThatŌĆÖs not only to keep the price down but also because itŌĆÖs designed to be a much more personal device; think on an office desk or a bedside table, so itŌĆÖs more likely to be manually adjusted by a solitary user who is positioned close to it while itŌĆÖs in action. Or, at least, in the same room; it does come with a little remote control that magnetically sticks to the front so you wonŌĆÖt lose it when itŌĆÖs not being used.

Like its siblings in the Dyson Pure family, purifying is done courtesy of a HEPA, carbon-activated, filter that, weŌĆÖre told, traps in 99.97% of all microbes and dirt in your air.

Finally a word on the V11 vacuum, which is the least smart in terms of connectivity of the new Dyson trio but possibly the most smart in terms of engineering. It packs in 20% more suction power than the Dyson Cyclone V10, capturing 99.97% of particles as small as 0.3 microns.

More excitingly for users - thereŌĆÖs now a display on the head of the vacuum, telling you battery life remaining and also letting you quickly toggle between modes. The V11 also smartly switches suction power based on what itŌĆÖs dealing with - carpet, floorboards, tiles and so on.

This is Dyson so the new devices donŌĆÖt come cheap. The Lightcycle is ┬Ż450 or ┬Ż650 depending if you want the desk or floor model; the Pure Me is ┬Ż230; and the V11 comes in both Absolute and Animal variants, starting from ┬Ż500.