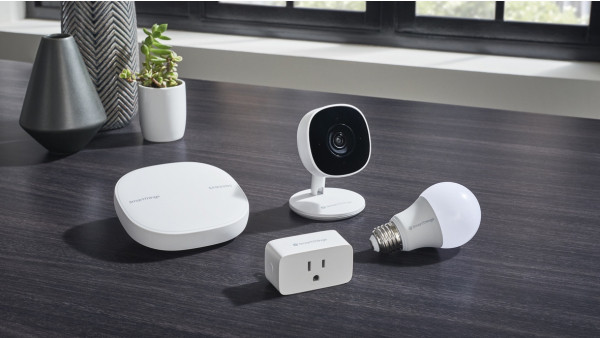 The new trio joins the rest of the connected devices sitting under the SmartThings umbrella, with a budget price tag sitting on each; the camera will be $89.99, while the smart plug and smart bulb will cost $17.99 and $9.99, respectively. All are available to buy from today from Samsung, acting as entry-level devices for those getting started with the smart home.

All three are compatible with Alexa, Google Assistant and Samsung's own Bixby voice assistant - one that will live inside the upcoming Samsung Galaxy Home, and, we suspect, Galaxy Home Mini. And, interestingly, both the camera and plug can be used without the presence of a SmartThings hub.

The real details? Well, let's focus on the camera.

Perhaps the most enticing proposition from the new additions, the Cam looks set to bring high-end features on a budget price - and who can argue with that? Here, we have a Full HD, wide-angle HDR video recording, with object and motion detection that links up with the SmartThings app. Samsung say the Cam is able to tell the difference between people, the motion of animals and a passing car, too, while activity zones can let you zero in on a particular area.

Besting a lot of current indoor smart security cameras, the SmartThing Cam also comes with a 1080p 145-degree lens, which, of course, shoots in night vision. Two-way audio is on-board, as well, allowing users to communicate through their smartphone to the camera.

Obviously, like the rest of the space, there's an additional cost attached to video storage. The Cam comes with 24 hours of cloud storage for free, with the option to sync up to four cameras, though 30-day cloud storage will set you back $7.99 per month, or $79.99 per year. This also lets you connect up to eight SmartThings Cam devices - you know, in case you have a palatial estate you need full coverage of.

And not only is this a more attractive proposition than the Nest Cam, say, which shuts off features like zone-setting for paying users, but the the actual price of the device itself is much cheaper.

That's the most exciting entry, but let's not forget about other two. These join the redesigned Hub and sensors, which launched last year, with the bulb offering a warm, dimmable white light and the plug, like others, essentially turns every appliance smart. If you have a lamp, toaster or hairdryer that's always left on, it can be controlled through both the voice or the app. They're not as exciting, naturally, but they do help flesh out the lineup for those planning to enter the Samsung ecosystem.

And we'll be putting the new trio to the test over the coming few weeks, so stay tuned for our full verdict.