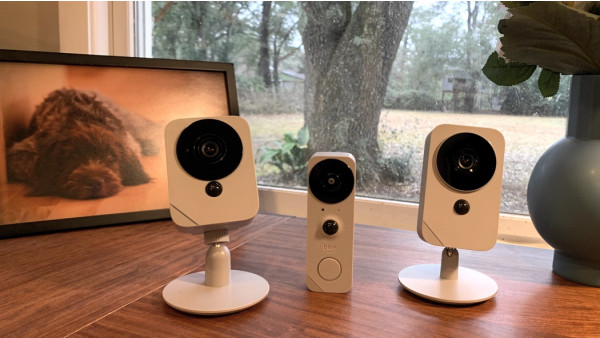 ADT, one of the biggest names in professional home security, is now embracing the DIY smart home with a new line of fee-free, fully-loaded smart security cameras.

Sixty days of cloud storage is just $2.99 a month per camera ($12.99 for unlimited cameras). Or ditch the cloud entirely with the option of local storage using onboard SD cards (for the Indoor and Outdoor Cameras only).

A Wi-Fi extender for $49.99 acts as an indoor chime for the doorbell and boosts battery life and range for the Outdoor Camera.

The cameras work with Amazon's Alexa and the Google Assistant in a limited fashion and there is no HomeKit compatibility or built-in Alexa - as had been teased when these were unveiled at CES 2020.

ADT says these features are coming soon and the Blue by ADT security system's hub is also a Z-Wave smart home hub if you're looking to expand your smart home. We're testing the security system separately, so look out for our review soon.

In the meantime, how do these smart security cams stack up solo against the big names in this space? Are they viable Ring competitors, can they take on Arlo? Read on for our full review.

ADT went a totally different route with the design of these cameras. Utilitarian, very large, and light grey (with the option of a graphite dark grey), they're made out of a tough plastic that doesn't lend elegance to the product but does give off the vibe of being able to survive pretty much anything thrown at them.

For the cameras that live outside (the Outdoor Cam and Video Doorbell) this bullet-proof styling isn't an issue, but the indoor one is just too large and bulky to fit in nicely in a living room.

The design is obviously a personal thing - I don't like it but my 12-year-old son was very impressed, saying it was "the coolest looking doorbell yet," and he's seen a few.

The Indoor Camera with its long cable.

Grey was a bold move in the current smart home sea of white and black and, again, it works well outdoors. White gets dirty too quickly and black stands out, whereas grey is a nice middle ground. Indoors, not so much.

The Indoor and Outdoor Cameras look very similar and both have a sturdy, flexible stand and the option to attach them to the wall or ceiling using a supplied mount and screws.

The Indoor Camera has a nice long cable, giving you plenty of placement flexibility and the Outdoor Camera is battery powered. The big, bulky battery needs to be removed to charge however, takes 6 hours to charge, and the charging cable is short and indoor-only.

The Outdoor Camera with its battery removed

The Blue by ADT Doorbell Camera shares the same design direction, with a bright LED encircling the button to indicate status and to show visitors where to press (the cameras each have a LED strip to show what mode they're in).

It installs slightly differently from most video doorbells, you wire a power bracket to your doorbell wiring then clip in the doorbell (which has a built-in battery to keep it running during a power outage, but it does need to be wired for regular use). The downside of this process is there's no angled mount option.

There is a chime kit to wire up to your indoor mechanical or electronic chime, and there's an optional Extender + Chime you can plug in inside to hear the doorbell ring. You can also hook the doorbell up to your Alexa Echo speakers to have them announce when there's somebody at the door.

Setting up each camera with the Blue by ADT app was very easy. Simply create an account, add the device, and scan a QR code with the camera to sync up to your WiFi.

All three cameras offer 1080p HD video, two-way talk, 130-degree field of view (which can be bumped to 180 in settings for the doorbell cam), night vision, and battery backup.

They all come with motion-activated recording, rich notifications (showing a clip), customizable activity zones, facial recognition, and people-only alerts as standard - there's no extra fees for these features as there are with Ring, Nest, and Arlo.

Factor in the 24 hours of free recorded footage and you can easily run these cameras for $zero a month. There's also the option of local storage on an up to 128GB SD card (not included) on the Indoor and Outdoor Cameras, so you can see further back than 24 hours, all without any ongoing costs.

That definitely makes the higher up-front expense easier to swallow.

The Blue by ADT Outdoor Camera

Other features specific to individual cameras include a smoke/CO listener in the Indoor Camera and a physical mute button on the device. There is no way to turn off the Indoor Camera though (other than unplugging it), and the Rules in the app that can be set to turn on or off cameras based on time of day or arming/disarming the system, are only available if you have the Blue By ADT security system installed.

None of the cameras have a built-in siren for scaring off intruders, which both Ring and Arlo cameras do. When connected to the Blue by ADT security system you have the option of a siren in the Smart Home Hub and in the Extender + Chime, but as stand alone devices these cameras lack that extra security feature.

On balance we were impressed by these cameras, particularly the number of high-end features offered without extra fees, plus the option to run them without having to pay for a monthly subscription - something we think will appeal to a lot of people.

However, we did run into issues with some features not working correctly, and were disappointed to discover that you can't turn the cameras off or on automatically without a Blue by ADT security system installed.

Video quality during the daytime was very good, clear and detailed. But a lack of HDR imaging did mean faces weren't super clear on the doorbell camera, as our front porch is in shadow.

Night vision was decent on the cameras, but the positioning on our doorframe of the doorbell meant the LEDs reflected off the wall rendering night vision unusable - and there is no option of an angled mount to correct it.

There are lots of options when it comes to tailoring how the system records and when you get notifications. You can choose to record on all "motion" or "people only," and have the option to always record any motion detected but only notify you about certain events.

You can set motion zones to cut down on unnecessary notifications, but every time we tried to set this up we just got a blank screen and a spinning wheel, so weren't ever able to test it on any of the three cameras.

Additionally, motion notifications were pretty slow to come in, taking at least 10 - 15 seconds after the motion started before appearing on our phone. The same was true of doorbell presses. Most concerning, the battery-powered Outdoor Camera sometimes missed motion all together.

To test this we placed the camera at different distances from our house, and things were better when it was closer. But when we put it next to the video doorbell to compare, it still missed about 20% of the events the doorbell cam picked up. Adding the Chime Extender might help with this - but we didn't test that device.

Footage from the Outdoor Camera shows it took a long time to register the person approaching from the street.

Presumably the motion sensor isn't waking up quickly enough on battery power and the events it did catch suffered from that back-of-the-head problem, where it wakes up and records just in time to see the tail end of the action.

Another annoying software bug was related to the Facial Recognition. You can choose to be notified for familiar faces and/or unfamiliar faces, but the notifications just appeared as "Unable to display media at this time," meaning we never saw the "unrecognized face."

Facial recognition was also never able to identify myself or my family members, despite adding our faces to the app in our profiles. Clearly this feature needs some work.

The notifications outside of facial recognition were good overall. You can customize when you receive them and we liked the rich notifications that show a snapshot of the action, which you can play right from the notification.

This was particularly handy as pulling up the app to view live feed regularly took upwards of 30 seconds on both the battery-powered and wired cameras, and sometimes timed-out entirely.

Viewing recorded footage was much smoother though, and a good history screen in the app shows the most recent clips from all your cameras, or from individual ones.

Overall the app worked well, and we liked the main home page layout, which shows you a live view of your camera feeds and a history log of most recent actions.

There are no tabs or shortcuts to the full History Log or the Saved Videos though, instead you have to scroll down the homepage and click on text links - which is a bit odd.

Device settings were easy to find and there are lots of options for tinkering with you camera's motion sensitivity, image settings and audio settings.

Notification settings are all in the My Profile section however, which is another odd choice, and it's all on or all off -you can't toggle on just notifications from your Outdoor Camera for example. Also, email notifications are on by default, which meant my inbox was quickly flooded - you will want to turn this one off right away.

Integrations with Alexa lets you have motion announcements and doorbell press announcements but we weren't able to bring up a live feed of any of the cameras on our screen-enabled Echo devices. We were able to on Google devices, however, but that's all you can do with the Google Home integration.

The Blue by ADT Smart Home Hub and security sensors along with the smart security cameras.

Software niggles aside, you can't beat free cloud storage - even if it's only for 24 hours, there just aren't many companies with quality hardware that offer that.

For the Indoor Camera and Video Doorbell Camera that makes Blue by ADT worth a look, but the outdoor battery-powered camera is too unreliable right now to recommend, plus with no built-in siren it's lacking as a security camera.

Overall, these cameras are worth considering mainly if you are getting the security system too, as they integrate well with that system's hub and sensors. You can set up Rules in the app to make your security system run autonomously and turn the cameras off when you're home.

Not being able to do that without the hub is a major negative to buying these as stand alone cameras, especially as there is currently no option for two factor authentication to secure your privacy.

If you get the cameras and the system however, you do have to pay the $19.99 monthly 24/7 monitoring service fee on top of the $12.99 cloud storage subscription (Ring integrates both charges into one). But you can self-monitor for free and still get all of the same software features, which is not the case with Ring.

Blue by ADT Smart Security Cameras
Blue By ADT's cameras are expensive up front, but offer features like facial recognition, activity zones, and rich notifications for free. With 24 hours of free recordings to boot, you can run these without being tethered to a monthly subscription. Good video quality, decent audio, and a responsive app are all pluses, but smart home integrations are limited (unless you pair with the Blue Smart Home Hub), some features are buggy and the battery-powered camera was unreliable in our testing.
PROS
CONS
TAGGED    security cameras    video doorbells