The Max pulls double duty as a Nest camera 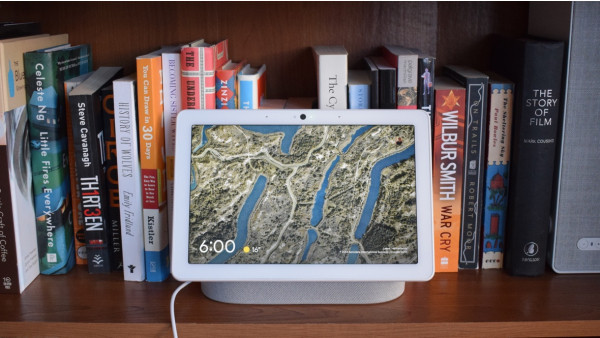 The original Google Nest Hub is something of a favorite here at Ambient Towers. It was, after all, crowned our Smart Home Product of the Year in 2018, and in our opinion, no other smart display has dethroned it.

But the Google Nest Hub Max (a name as large as its dimensions) is having a damn good try at it. Yes, it's bigger. In most ways, itŌĆÖs an inflated, more imposing Nest Hub.

Read this: The best smart speakers 2020

But now it has a camera, a feature omitted from its smaller, more punctual sibling, and not just any camera - a Nest camera. Remember, Google and Nest are now completely one and the same. Keep up.

If you donŌĆÖt like the idea of putting another camera in your home, weŌĆÖll stop you right here and instead point you at our Nest Hub review.

For the rest of you, we've been testing out the new Max, alongside the smaller Hub and other smart displays to see how it fares.

Price when reviewed
$229
Buy on Amazon

The Nest Hub Max looks like someone shot the smaller speaker with a growth ray. It places a large 10-inch display on top of a speaker, angled slightly upwards so that itŌĆÖs easier to view when itŌĆÖs below eye level. We said it in our review of the original device, but from behind it really does look like Google just glued a tablet onto a speaker.

That sounds like a criticism. Actually, in the pantheon of smart displays right now, the Nest Hub and Max are two of the best-looking. They look clean - that's probably the best way to put it - with a white bezel surrounding the screen and your choice of a white or grey back/speaker.

The smaller Nest HubŌĆÖs screen is just 7 inches, making it sizable enough to glance at the date or see the weather. But while I consider that fine, many people would see it as too small. Amazon just launched a new 8-inch Echo Show, which might be a better sweet spot.

The Max goes very much the other way, adding three inches of screen makes a huge difference. Put side by side, the difference is vast.

The Hub feels like it can easily be hidden out of sight, while the Max is built to be seen. It folds into the philosophy of both devices: The Nest Hub was designed to be more privacy-aware, with no camera and sized perfectly for a nightstand; you could put it in your bedroom and not worry about being spied on.

The Max, on the other hand, is all about the camera, which sits slap-bang in the middle of the top bezel and marks the second major cosmetic change to the Max. It's the type of display youŌĆÖd put in a living room or kitchen; maybe youŌĆÖd put yours in a bedroom, but without a physical camera shutter I personally wouldn't. Oddly, Google has opted to software-block it instead. A button on the back of the Max will turn the camera off and mute the mic, but wonŌĆÖt physically cover the lens.

You do still get the ambient EQ lighting sensors here, which let the Hub Max screen dim to the surrounding light, so it never feels too bright. In fact, when I turn off the lights for the night, the screen is barely comprehensible in the dark ŌĆō just enough so I can make out the time. I like that.

It also means the Nest Hub and Nest Hub Max double as fantastic digital photo frames. During setup youŌĆÖll be asked whether youŌĆÖd like to have your personal Google Photo albums display in a slideshow as backgrounds on the Hub, but you can also opt for some curated packages of photos and artwork, all of which look very pretty.

With the size increase comes a boost in sound quality: the Max now has a 75mm woofer and two 18mm tweeters, and that affords it substantial volume without the tinny sound of the smaller Hub. In a sound-off between the two, the Max fared better but still got rattly at higher volumes.

It sounds as good as its biggest competitor, the Echo Show, but if you already have good Wi-Fi speakers in your home, the Max won't impress you.

Beyond size, itŌĆÖs the 6.5-megapixel camera that sets the Max and the smaller Hub apart. But itŌĆÖs not just a Nest camera. In fact, its primary purpose is for facial recognition, an optional feature that lets the Max customize its display to whoeverŌĆÖs looking at it.

YouŌĆÖll be asked if you want to set up facial recognition during setup in the Google Home app, a head-turning process that takes a few seconds and lets Google ŌĆ£mapŌĆØ your face.

Sound scary? It is a little, and I understand why some people will be uncomfortable with this feature. Google tells us the facial data remains local to the device, but during setup the app does point out that Google occasionally takes some data and processes it in the cloud for the purposes of improving the service.

But you can easily skip it and still enjoy the Max plenty without facial detection. If you do set it up, it will be able to recognize whoever's in the room and display custom calendars, YouTube suggestions, and other recommendations based on their Google profile.

ItŌĆÖs pretty sharp at picking up faces too. Thanks to the 127-degree wide-angle lense, it can still see you if youŌĆÖre stood off to the side of the room. Those viewing angles are handy for Duo calling too, another built-in feature of the Nest Hub Max.

Duo calling has been supported across all of the Google Smart Displays, but you obviously need a camera for video calling, which the smaller Nest Hub lacks. You can still Duo call with camera-less Smart Displays (itŌĆÖs also rolling out to display-less Google Home speakers) but the Max has the advantage of giving you the full Duo experience, which allows you to make and take calls with other Duo users, including those with the Duo smartphone apps.

I tried a couple of Duo calls in testing and I have two thoughts: 1. Barely anyone I know uses Duo. 2. If you do use it, the Hub MaxŌĆÖs wide-angle camera is really good for it, mostly because it has some neat tricks where it will zoom in and follow you around the room as you talk. It reminded me a lot of the Facebook Portal, which deploys similar features in its video calling and, at the time of reviewing the first Portal, felt unique.

Actually, I have a third thought: the dimensions donŌĆÖt work that well. The Nest Hub Max has a horizontal display but Duo calls with a phone appear as a vertical strip down the middle, and it doesn't look that great.

But thereŌĆÖs ŌĆ£NestŌĆØ in the name, and for all intents and purposes the Max behaves like any other Nest camera. YouŌĆÖll have limited functionality in the Google Home app alone, and when you get to sitting up the Nest camera you'll be nudged to download the Nest app separately in order to access deeper features like notifications and room-by-room viewing.

This is also how youŌĆÖll get access to Nest Aware, the paid service that unlocks features like person alerts, closeups, activity zones, and timelapses.

And remember, Google's and NestŌĆÖs services have now merged, so if you have an old Nest account lying around youŌĆÖll need to merge your data in the Nest app first (donŌĆÖt worry, it walks you through all that).

Notifications for person detection worked fine - after a reset. It turns out thereŌĆÖs a bug plaguing some usersŌĆÖ accounts where Nest notifications arenŌĆÖt working (as we discovered on the Hub Max). Google has a walkthrough for fixing it, which is basically: log out of everything, log into Nest on a web browser, turn all your notifications off, log out, log back in and turn them on again. After we'd done that, we had no problem. But itŌĆÖs annoying that this issue even exists.

Whenever the Nest Hub Max is recording, youŌĆÖll see a green light by the camera and there will be a notification on the display to let you know itŌĆÖs filming. GoogleŌĆÖs added these features for privacy reasons, and you canŌĆÖt turn them off.

Talking of privacy, itŌĆÖs important to differentiate between how the Hub Max handles facial recognition and how Nest does, because despite both being part of the same company and, more recently, platform, theyŌĆÖre two different things.

However, this disconnect extends beyond privacy and into function, and this is where the Nest Hub falls down. The weirdest example of this is that I canŌĆÖt say, ŌĆ£Hey Google, set Nest camera to AwayŌĆØ or have it display my recent Nest activity.

This feels like a huge miss from Google, especially as itŌĆÖs trying to push the new Google Nest brand as one giant entity. So while it is, yes, a Nest camera, it also feels like that part could be integrated a lot better.

The other part of the name is "Hub" but the Nest Hub Max isn't a smart home hub in the way it completely binds your smart home together. There's no Zigbee or Z-Wave radios; everything is completely Wi-Fi-based.

Still, it's a "hub" insofar as it provides a good access point to your connected kit, thanks to the large display and Google's Home View, which you can drag down from the top of the screen and shows you what's connected and switched on.

Naturally you've got Google Assistant built in too, but Home View is more efficient for an at-glance look at all your smart lights, switches, thermostats etc., and the status of each. You can also use Home View to control these devices, but the options are often more limited than using the app from each third-party device.

Smart lights are a perfect example of what I'm talking about. I have a bunch of Hue lights in my apartment, all of which play nicely with Google Home. Home View replicates the room-by-room layout of the Home app, so I can swipe down and see that my living room lights are on, but my bedroom ones aren't. I can also choose from a pre-determined palette of 42 colors ŌĆō or I can open the Hue app and choose from 16 million.

Of course, in some cases the more limited functionality of Home View makes sense, and rarely do I use more than two or three different colors for my lights anyway.

There's one other use for that camera we haven't talked about: gesture controls. Well, control, singular. You can raise a hand up to pause/play a song, podcast or video that's being played, and it's been nicely responsive in testing. This is the only gesture available right now, but Google says it has plans to roll out more.

Gimmicky? A little, but useful for those moments when your hands are dirty and you don't want to touch the screen, and faster than using your voice.

Finally, the Hub Max works as a video player too and supports services including YouTube, YouTube TV, HBO Now, Starz, and CBS All Access It also supports anything you can stream over Chromecast, however, Netflix doesn't fall into either of these camps. Sorry.

Google Nest Hub Max
The Nest Hub Max is bigger, but not necessarily better than the original Nest Hub. It makes great use of the camera, with some nice personalization features. As a Nest camera, it works perfectly fine, but it's odd that this feels largely siloed from the core Hub experience.
PROS
CONS
TAGGED    google home    smart speakers