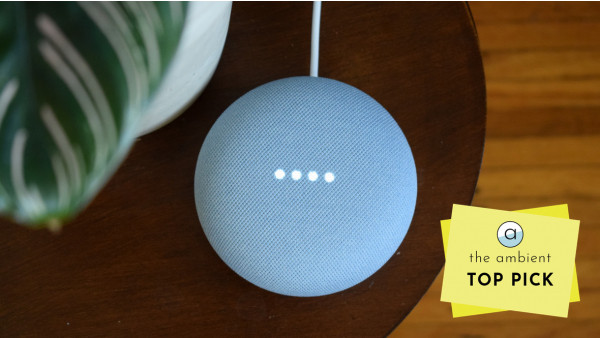 The Nest Mini is Google's newest smart speaker, and the second generation of the popular Google Home Mini.

The upgraded version features a new name, a more powerful speaker and processor, and a new color (Sky!).

While it looks just like the first-gen and costs the same, it's faster and mightier under the hood. The sound quality has been improved, and a new machine learning chip with one TeraOPS of processing power brings improved speed and the opportunity to move some of the Google Assistant's actions directly to the device, for faster responses.

Read this: Your ultimate guide to Google Assistant

Oh, and there's also a hook in the back for wall mounting ŌĆō just what we wanted. (What we really wanted was a 3.5mm audio jack, but apparently you can't have everything).

So, is the Google Nest Mini worth the upgrade? Read on for our full review.

At first glance the Nest Mini is indistinguishable from the Home Mini, until you turn it over. Here you'll find a new hook to make wall mounting easier, without the need for any add-on devices.

It also has a barrel plug instead of a Micro USB cable, but it still comes out of the side - meaning you can't hide it in the wall if you do decide to wall mount. The plug is also slightly bigger.

Price when reviewed
$49.99
Buy from Google

The fabric cover is now made from 100% recycled plastic with one half liter bottle sacrificing itself to make two Mini covers ŌĆō a worthy effort ŌĆō but they feel exactly like the original Mini.

LED touch points for adjusting the volume appear on either side when you touch the cover (and make a welcome return, having been removed from the original Mini), so you don't have to randomly bang on the device to try and get it to turn down. You can also tap the lights in the center to pause and play again.

The biggest physical design change is that hook, but it's hard to find a good spot to hang this on your wall with that cable dangling down. However, with a hot market out there for wall mounts for Minis, this is an addition that clearly people want.

We tried it on a few walls around our home ŌĆō in the bathroom, kitchen, bedroom ŌĆō but it wasn't an elegant solution. We finally decided on centering it underneath a television, trying to make a feature out of the cable, while hiding most of it behind a sofa.

Wall mounting does improve the sound (more on that later), so if you can find a good spot, you'll want to try it out. It flips the touch controls however, but you can adjust those in settings in the Google Home app.

Finding a good spot for wall-mounting was challenging....

Sadly, there's still no audio jack, something the Echo Dot has had since its first iteration. So if you want to connect it to a better speaker to give that voice control, you'll need to pair it over Bluetooth.

There's a new color too, Sky blue (inspired by Lake Como in Italy, apparently) ousts the previous Aqua hue. We really like the blue, it's more understated than the Aqua color was, and is a better fit for most home decor.

The Nest Mini brings some new features, but not all work as well as we hoped. On the audio front, you can now pair two together for stereo sound (we weren't able to test this), or use Google's new Stream Transfer feature to shift music from one speaker to another by saying "Hey Google, move the music to the [Living Room] speaker." This worked well in testing, although there was a few seconds lag time.

The Nest Mini also has an ultrasound feature that is supposed to sense when your hand is near while music is playing and illuminate those LED touch controls, but despite our best efforts we couldn't get this to work as it should.

We did however find that the new and improved Google Assistant inside the souped-up speaker was marginally faster. It launched The Tennis Channel on YouTube TV on a regular TV with a Chromecast installed in under 5 seconds, and it turned lights in its assigned room on and off in under two seconds.

Whether we have been taking advantage of the new machine learning chip - which should learn our most frequent commands and be able to respond to them locally - is hard to tell. We've only been testing the device for just under a week.

Overall though, Google Assistant is fast catching up to Alexa when it comes to smart home control. In our testing we've found Google Assistant is able to understand variations in language slightly better, not requiring such specific nomenclature to get it to do what you want.

In our original Google Mini review, Alexa was the clear winner when it came to controlling your smart home. These days if feels like the Google Assistant is smarter, however Google still isn't able to do as much with as many devices. As an example, it can't unlock the Schalge Encode door lock, which Alexa can.

One of the few reasons to upgrade from the Google Home Mini is the boost in audio quality. The Nest Mini gets a new custom 40mm driver, and a bass that Google claims is twice as strong while promising not to drown out the mids.

It's certainly a noticeable upgrade when played side by side with the original Home Mini, allowing the speaker to go louder without sounding like a vibrating pack of Tic Tacs. But be warned, it still distorts at those higher volumes.

We also discovered that the Mini sounds better when mounted to a wall. It's not rocket science: placed this way it allows the speakers a better range of fire across the room, and the difference is particularly noticeable with music. Whereas we would rather leave music to dedicated systems like our Sonos speakers or our HomePod, a wall-mounted Mini is much better at filling a small room in a way that doesn't sound terrible.

We also put it against the Echo Dot 3rd Gen and reckon Amazon's bite-sized speaker sound better when they're both placed flat; but it's harder to call when the Mini is firing off a wall.

But remember, you can pair two Nest Minis for some thumping stereo sound.

One thing we do like is Google's new Ambient IQ feature, which will raise or lower Google's voice depending on other noises in the room. If the TV is blaring, for example, the Assistant will speak louder. However, this feature doesn't yet work with music.

What we don't like is the lack of 3.5mm audio jack, which means you won't be able to hook up the Mini to any old audio systems unless it's over Bluetooth. And it's something the Echo Dot does still offer ŌĆō more's the pity.

Google Nest Mini
If you're looking for your first smart speaker, this is easily the best currently available in terms of value, features, and design. However, with no major hardware changes, the only reason to upgrade your existing Google Mini to a Nest Mini is those under the hood improvements. If faster smart home responsiveness and much better sound, plus new features such as touch controls and stereo pairing are important to you, then you have our blessing.
PROS
CONS
TAGGED    google home    smart speakers