A nice-to-have upgrade, this smart speaker is just rounding up 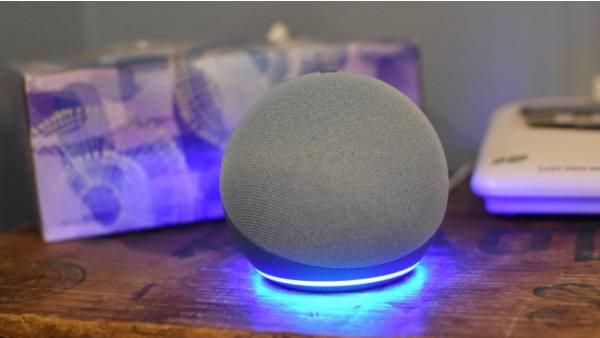 The new Amazon Echo Dot smart speaker takes the same massive departure from its previous form-factor as its big sibling, the Echo.

Only, instead of being squished downward, this Dot has risen up, going from a flatter, 2D dot shape to a more spherical, 3D dot shape. It may look completely different from the previous generation, but it is - in essence - pretty much the same smart speaker.

Now available to buy for $49.99 and coming in three colors, Glacier White, Charcoal, and a new Twilight Blue (no more plum or grey), the fourth-gen Echo Dot has the same 1.6-inch speaker as its predecessor (albeit with some front-firing power thanks to that rounded shape), and remains one of the best and cheapest ways to get in on the smart home speaker world.

But, with the equally capable Echo Dot third-gen still available - and for $10 less - is it worth the upgrade? We've been hanging out with the all new Echo Dot for a few days now and here's our full review.

While it drew gasps when it was unveiled last month by Amazon, the new spherical shape was clearly hinted at with the launch of the Echo Glow last year - in fact they're identical in design, other than one being a light and the other a speaker.

Price when reviewed
$49.99
Buy on Amazon

Entirely round, bar a flat bottom to sit securely on a surface, the new Dot is a diminutive version of the 2020 Amazon Echo.

About the size of a softball (compared to the melon-sized Echo), it has the same tactile raised buttons popping out of the fabric-wrapped speaker, the same semi-circular plastic base, and the same proprietary power port (with a slightly slimmer plug) as the larger Echo.

And it too comes with a 3.5mm aux jack to connect it to another auxiliary-supporting speaker and built-in Bluetooth.

The buttons have the same functions as on all Echo speakers - volume, mute, and action (for summoning Amazon's digital assistant without saying the word) - but they're much closer together in this design, taking up less real estate, and being generally less conspicuous.

Surprisingly, while the Dot is the same width as the third-gen model, it's much taller - almost double the height. It's a strange move as the Dot has so far been the Alexa speaker you can tuck into corners, pop behind a more serious audio setup, mount on the wall and even hang in the ceiling using an array of ingenious third party mounts.

This versatility is part of its appeal, and the new form-factor doesn't allow for that anymore - which may be why Amazon is keeping the third-gen model around, for now.

If you don't plan to hide away your Dot however, this new design is much nicer for putting on a desk or shelf, with its cleaner, more modern look.

We particularly like the placement of the LED light ring at the base, relocating it from its traditional spot on top. It's less in your face here, which is handy when it sits on your bedside table, a prime spot for a Dot.

Setting up the Dot is very straightforward, especially if you purchased it on your Amazon account - as it arrives already paired, so you just need to plug it in and the Alexa app will see it and ask if you want to add it.

If it's not pre-paired, just log into the Alexa app tap More > Add a Device > Amazon Echo and then select Echo Speaker and follow the steps.

The new Dot comes with two specific feature upgrades - a front firing speaker (more on this in a bit) and a touch-to-snooze option for alarms, imported from the Echo Dot with a Clock.

If you have an alarm set, just tap the space between the buttons, right at the top of the device, to snooze it. Simple, and much easier than mumbling ŌĆ£Alexa, shut up.ŌĆØ

Beyond this, the Dot is still the same excellent smart speaker as always, thanks to Amazon's built-in voice assistant, Alexa. It's great for voice control of smart home devices, setting timers and alarms, adding to your To Do and Shopping lists, and listening to audio books or podcasts.

You can enable a free Alexa Guard feature to keep an ear on your home when you're not there - listening for the sounds of smoke alarms going off or glass breaking and sending you an alert in the Alexa app.

It's also ideal for using as a family intercom - stick a couple in your kids' rooms and "Drop In" anytime from another Echo or the Alexa app, or send a household announcement to all your speakers to get everyone to the dinner table.

In fact, the Dot is a great child-friendly speaker, we use them in our household for listening to audio books and playing soothing sleep sounds at bedtime.

There are even two super cute, kid-friendly models coming soon that feature panda and tiger designs and come with Amazon's Kids+ content platform for just $10 more.

However, the Dot didn't get any of the under the hood upgrades of the Echo, no smart home hub support or super-charged A1 neural processor here. And while there was a bump in the speaker chops, the Dot is still not a replacement for a serious music speaker.

That being said, it does sound better, handling loudness more ably than the third gen model, and its front firing speaker able to project sound further into a room. But on its own it's far from room-filing and at higher levels the clarity gets lost.

Bradley Cooper and Lady Gaga were almost indistinguishable from each other when we had it blasting Shallow at the top volume. Alone, this isn't an ideal primary music listening device. For that you'll want the Echo fourth-gen or the Echo Studio.

Two Dots in a stereo pair did do much better, however. We tested them on either side of a bed and the proper stereo separation really improved the clarity, even at higher levels, making it much sound better. But the bass was still slightly shoddy and while you can tweak the bass, mid, and treble - either by asking Alexa to or using the app - this didnŌĆÖt seem to do much.

If you are looking to upgrade your Dot set up from a much older model - this is a worthwhile upgrade, but if you already have some third-gen dots, there's no need to trade in your old models - you won't see much of an improvement.

For those looking to dip their toes into the Alexa waters, this is a fun and worthwhile first foray into the wonderful world of smart speakers.

Although our favorite Dot is the one with the clock, and really we think Amazon should just slap a digital display on the Dot and call it good. None of this penny pinching for an extra few bucks, Bezos.

Amazon Echo Dot 4th-gen
Buy on Amazon
Amazon Echo Dot fourth generation
The Echo Dot is easily the best entry-level option to the Alexa ecosystem, featuring improved sound with a stylish form-factor and the excellent Alexa voice assistant. However, unless you are really in love with the new design, the third-gen Dot does almost everything the same and costs $10 less, or the Echo Dot With Clock has all of the above plus a handy digital display, leaving this Dot slightly stuck in the middle.
PROS
CONS
TAGGED    amazon alexa    smart speakers