Amazon's first smart light is fun and whimsical, but not a necessity 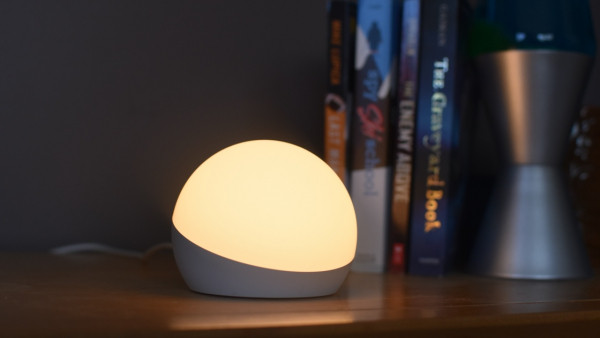 The Echo Glow is Amazon's first smart lamp. It's a good-looking device with some nice features, but it's far from an essential addition to your smart home.

Designed for kids, the Glow doesn't have a speaker or microphone built-in so you need to pair it with an Amazon Echo device for voice control. And while you can do a few things on the lamp itself, without voice control it's a rather expensive, if colorful, nightlight.

It is a very nice nightlight, however, and really fun for kids to use - much less confusing than a smart bulb in a lamp thanks to its tap functionality. Tap it and it changes color. That's an easy concept for a child of any age to grasp, and thankfully the Glow is durable enough for some good old fashion child hand-banging.

We've been testing the Echo Glow out for the past week or so, read on for our full review.

The Echo Glow smart lamp is a surprisingly elegant piece of tech, considering it's aimed at children. A circular lamp with a flat bottom, its hard polycarbonate plastic shell houses 100 lumens of diffuse warm white (2600K) and RGB color LEDs.

Price when reviewed
$29.99
Buy on Amazon

At those levels this is not intended to be a task light - although you could get away with reading some large-type picture books. Its main purpose in life is as a colorful, whimsical nightlight that will entrance little children and have enough features to keep older children interested as well.

It's also not exclusively for kids. The warm white light and built-in campfire mode both emit diffuse, soothing light, on par with the much more expensive (although much more versatile) Casper Glow lamp. So it's perfectly suitable as a nightlight for anyone's room, no matter your age.

Set up is billed as stress-free - as it's one of the first devices to be officially part of Amazon's Certified for Humans initiative. This means it's supposed to be easy to get up and running, but that was not the case for us.

I've set up a fair few smart lights and Amazon devices in my time and this was one of the trickiest. It started with repeated "Service failures" that prevented the lamp from connecting to the Alexa app, and continued with a steep learning curve - it's one of those devices where you have to have the wording exactly right for voice commands to work. Not ideal for a kids' device.

Once I got past the service issues (admittedly Boxing Day may have been a heavy traffic day for Amazon's servers), I was able to get it connected, and from there the process was pretty straightforward.

Plug it in, open the Alexa app and scan the barcode on the device (or in the manual). The lamp will then connect to your Wi-Fi network all by itself - this is where the Certified for Human's bit kicks in, there's no need to ask Alexa to Discover Devices or any of that malarky.

Once connected, I choose a room for the light and gave it a name. It's important to give it a unique, easily pronounceable name, especially if a child will be using it with voice control.

Finally, I had to go through a laborious parental consent process, even though I had at no point said this was going to be used for a child. Amazon has got into hot water with devices in children's bedrooms in the past, so we can see why they're going here, but as this is simply a light - no speaker or microphone. It seemed a little OTT and definitely messed with the whole simple setup process.

Echo Glow is a color changing lamp that can be controlled using a smartphone app, by voice control (if paired with a compatible Echo device) or by tapping it.

Tapping it changes the color, with options of red, green, blue, pink, yellow, purple, orange and white. To turn it on or off you need to press a small button at the back. I would have liked to see an option to double tap to turn it on or off, as the button is small and hard to get to.

The lamp also has several Color Modes, as they're called, similar to Philips Hue's Scenes. These include Color Flow, Campfire, Christmas, Hanukkah and Disco - there's about a dozen in all. They offer a variety of color animations, including flickering, strobing or simply cycling through a selection of colors. You can set the modes in the app or by asking Alexa.

The Glow lamp also dims or brightens, although this is pretty imperceptible, and means it's not much use as a gentle fade in wake-up light.

Some unique functions that work when the lamp is grouped with a specific Echo device include the ability to set a Rainbow Timer. This sounds super fun but in practice is just Glow entering its Color Flow mode while the Echo it's paired with runs the actual timer. It also keeps cycling through colors even after the timer is done, making it hard to see what you would use this for.

The sleep timer is more useful. Ask Alexa to set a sleep timer for the lamp and it will turn it off for you automatically. Handy for a child who wants the light left on while they fall asleep. While you could use the Glow Lamp without a paired Echo device, you really need one for features like this as you can't set timers or activate modes on the device itself.

The Dance Party option is fun - and something older kids will enjoy too. Ask Alexa to set a Dance Party on the Echo paired with the Glow and it will play music while the lamp flashes colors.

Read this: Sleep tech on test

Finally, there is the option to set a wake up alarm with the lamp. This is something you can do with Alexa and any smart light you have, so it's not unique to the Glow. The biggest issue here however is that Alexa's alarms all have to have a sound component, you can't have the alarm be just the light coming on.

Plus, the alarm goes off first then the light comes on, and the Glow lamp just doesn't get bright enough to wake you up, so it's not really a soothing substitute to a regular alarm in the way the Philips Hue bulbs or the Casper Glow Lamp can be.

Echo Glow: In use

While the built-in smarts of the Echo Glow weren't super useful to us, we like that you can use the lamp as part of any Alexa routine. This meant I could set up a routine that frankly should be part of Glow from the get go: The Traffic Light Wake Up routine.

This is where you have a smart bulb turn red early in the morning, so when your child wakes up he / she knows they're not allowed out of bed. When the light turns green - at a time set by you - that's their signal they can get out of bed. This is a great smart home use-case for young children who can't tell time yet and sleep-deprived parents looking for a way to keep their child in bed.

Using Alexa's Routines I was able to set this up with Glow and it worked like a charm. Considering "sleep training" lights built for this - and this only - sell for around $50, Amazon's missing a trick not having this as a main feature.

In everyday use we found the Glow to be very sturdy, and not easy to knock off the table. But it requires very specific wording to get it to do anything beyond changing color or turning on or off. Setting alarms, timers and wake-up routines with voice was not as easy as it should be and if you were expecting a child to use this on their own you'd need a cheat sheet taped to the bedside table.

The USB port is a nice touch and gives you more options for powering it, which brings us to our other wish: It would be awesome if this was battery-powered - so the child could take it with them to the bathroom at night or into their play fort.

We did enjoy the different modes - the effects are fun and interesting and great to use to add atmosphere to playtime or reading time. While the color rendition is not on par with Philips Hue, they're bold enough to have some impact and easy to change with voice control.

Echo Glow smart lamp
The Echo Glow smart lamp isn't particularly smart, but it's a fun addition to any child's room and a great way to introduce them to smart lighting without risking an expensive bulb. Don't let the name confuse you however, this is not an Echo speaker, there's no microphone or speaker in here - which may be a good thing in a child's room. But if you don't pair it with an Echo device it's limited in its functionality to just changing colors with a tap.
PROS
CONS