With this Assistant-ready sound bar, go all-in or go elsewhere 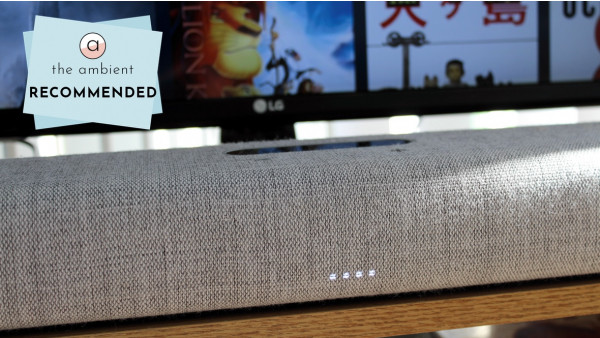 Harman Kardon made a big splash when it unveiled its Citation range of speakers last year, with eight Google Assistant-friendly models sitting along a range of different budgets.

But while all of them are technically smart speakers, there's a fairly clear split. Devices like the Harman Kardon Citation 500 are singularly offering a great music listening experience, while the Citation Bar, Towers, Surround and Subwoofer all bring the hope of a top-tier experience for your TV.

With the price of entry for just the Citation Bar a lofty $999.95, though, this isn't for the faint hearted. So, in a space filled with far cheaper options ŌĆō both smart and dumb ŌĆō how does this stack up? We've been living with the bar for the past few weeks to find out. Here's a rundown of its design, sound and smart support.

Harman Kardon Citation Bar: Design and in use

The Harman Kardon Citation Bar follows a design similar to the rest of the range ŌĆō a fabric mesh that's available in grey, as above, or in black. And, depending on your setup, it can fit nicely onto a TV stand or be mounted to a wall.

We didn't attempt this ŌĆō as you can see, our TV stand couldn't even handle the 45-inch width, though at 2.4 inches high and 4.5 inches deep, it won't stick out too much on a wall. And if you're choosing to pick up a sound bar this big, we'd hope you have the screen to match.

If you're worried about weight, you should know that the Citation Bar is 4.1kg ŌĆō hardly surprising when you think of the size, as well as the three 20mm tweeters and six racetrack woofers packed inside.

Does it look good? We think so. Granted, it probably doesn't look the part in our home, but that's not entirely the Citation Bar's fault. And though we had a fairly small living room to try it out in, it still sounded great (more on this below). We'd say the the bigger the room, TV and stand/wall to hold it, the better.

Something that also carries over from the cheaper Citation speakers is the touch panel on top. Like on the other devices in the family, this lets you tinker with the features and outputs plus manually control what's playing. If you're streaming music over Spotify, Google Cast or Bluetooth, you can pause or skip forward and back, and the volume can be tweaked using the physical buttons resting below.

Interestingly, we found this panel was much more responsive than the Citation 500 we tested ŌĆō changing the volume through the slider was pleasant, and swiping up and down through menus was fast and easy. However, we must say, we rarely used the panel and tended to reach for the remote control instead.

This is a real life-saver because the Citation Bar actually has a couple of head-scratching quirks that, if not for the remote, would force you to actually get off the couch and sort. Ridiculous, right?

The first is that it disconnects when switching between apps, meaning you have to re-connect it back to the HDMI ARC setting. each time If you don't have the remote handy, this means going over to the touch panel just to tap it again ŌĆō every time you want to get sound back after switching between apps. A real nuisance, and, to be honest, even having to pick up the remote each time to fix this starts to irritate. We hope this gets fixed in a software update, as other users have complained of the same problem.

There's also the fact it goes into power saving mode after 20 minutes without operation. This generally doesn't affect the apps you're running natively through the TV; though, for some reason, it did have an issue when we were using apps on our Fire TV.

Though the Citation Bar has plenty of outputs, making it compatible with pretty much every TV, it's Google Assistant that separates it from your regular sound bar. As with the rest of the Citation range, Google's digital assistant is built in, and that means it's able to handle everything your regular Google Home can, whether that's controlling the smart home or simply playing music over Spotify.

It's all now much easier in the revamped Google Home app, though we did have some issues getting the Citation Bar up and running. Before we were able to get it set up, we we forced into a lengthy update ŌĆō one that got stuck 90% of the way through. This happened a couple of times, when the Google Home app couldn't actually pick up the device when searching, then did eventually recognise it but didn't complete the setup properly.

It was a mess, resulting in about three or four restarts and removing the Citation before it began working correctly. Far from ideal.

However, even with it all up and running, it's been a mixed experience. The good news is that the typical Google Easter eggs and features, such as the Assistant offering weather and directions, all work as normal, although ŌĆō as with the other Citation devices ŌĆō you won't get any information on the small display.

To kick the Assistant into action on the bar, you can either talk out the usual "OK, Google" or "Hey, Google", or hit the button on the remote ŌĆō though there's a very obvious problem with how the sound bar presents the Assistant when it's connected to the TV.

It won't rear its head when you're connected over Bluetooth or Wi-Fi, but, if you're connected via AUX, Optical or one of the HDMI ports, Google Assistant will be muted (prompting four orange dots, as shown above, to continuously show on the front while in use). So, oddly, if you're connecting this way, the only way to talk to Google is by pressing the button on the remote. Harman says this may be different with future software updates, but, for now, you'll have to deal with limited access to the voice assistant.

As we always say with Assistant, you're getting more detailed responses than on Alexa, but you miss out on some of the smart home integrations. For reference, Amazon has recently announced Alexa works with 60,000 smart devices, and at last count the Assistant was only on 12,000. So, as well as being able to contend with the current state of Assistant on the sound bar, make sure you know what you're getting into with Assistant on a wider level, too.

There are definitely Google Assistant and software bumps to be aware of, as we say, but one thing the Citation Bar doesn't lack is quality sound. And this extends to whether you're streaming a playlist while cooking or blasting Game Of Thrones, with the Bar handily letting you switch between standard mode, music mode and movie mode in the touch panel's menus.

Is it better than something like the Polk Command Bar, or Sonos Beam? On its own, definitely. Where the Citation 500, for example, was a speaker with a very small sweet spot, the Bar has a much more forgiving mid-level, particularly, and the balance is much more even.

The only real issue is, to get the most out of a bar like this when watching TV, it's best hooked up to a subwoofer or other speakers. For Polk and Sonos owners, that's a much more affordable reality ŌĆō the Command Bar comes packed with a subwoofer, while Sonos offers countless multi-room options. For those with the Citation Bar, not only is the price for multi-room audio higher, but only select devices in the Citation range can tap into the Virtual Surround setting and link them up.

Unfortunately, we didn't get a chance to test this out. And though the Citation Bar's sound is mightily impressive in its own right, enough to carry itself, we can't but feel like your money would be better spent on an alternative.

If money is no object, though, you're still getting a great sound bar for your TV. We're not able to recommend the surround sound features, as we say, but we can imagine pairing the Bar with the Citation Towers would create a wild home cinema experience. But as we said before, make sure you have a bigger space and better setup than we did, if you're thinking of doing this.

Harman Kardon Citation Bar
The Harman Kardon provides a supreme listening experience with plenty of choice for outputs and sound modes, and it looks good doing it; there's a responsive touch panel, neat fabric exterior and the option to mount or sit. Where it falls down, unfortunately, is the easy part ŌĆō Google Assistant is forced to remain dormant if you opt for the HDMI ARC, and standard features like the power save function and switching outputs are implemented poorly. This is still a great option for audiophiles, and those who want a smart hi-fi multi-room setup, but those who prioritise their budget and still want Google Assistant would be better served with Sonos.
PROS
CONS
TAGGED    smart speakers