Indoor/outdoor, AI detection, and color night vision all for $20 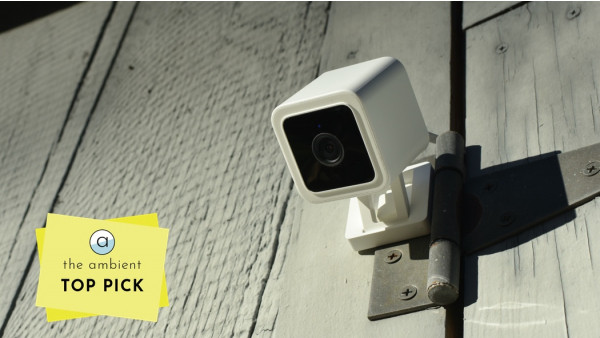 With a new product launching practically every day (as I type they've announced a handheld vacuum cleaner), the folks at Wyze have been brilliantly busy since launching their first product in 2017. Thankfully, they've found some time to update their flagship device - a $20 smart security camera: the Wyze Cam v3.

The Wyze Cam v3 builds on the previous version with a fresh new look, more powerful hardware, and tons of other upgrades.

The biggest of which is the IP65 rating that turns this tiny cam into an indoor/outdoor powerhouse.

Another great upgrade is Full HD 1080p color night viewing, thanks to an F1.6 aperture that picks up twice as much light. The new lens also adds a wider, 130-degree field-of-view to get an even better view of your surroundings.

A mini siren to warn intruders and magnetic base round out the new stuff, all of which is on top of existing features such as motion and sound detection, 24/7 continuous recording (with a microSD card), person detection (for a fee), Google and Alexa integration, free cloud storage, and the option of local storage.

Price when reviewed
$19.99
Buy from Wyze

So, how does this $20 camera stack up against the other budget security cameras out there, such as TP-Link's Kasa Spot and Eufy's 2K Indoor Cam?

And can it compete with the best smart security cameras, like Arlo and Nest? Read on for our full review.

With the same small size and incredibly lightweight build as the v2, the Wyze Cam v3 sports a smoother, more modern look, with rounded corners and a larger lens. It's still entirely plastic, but is now all-white (bar the black lens), whereas the v2 has a grey stand, giving the v3 a more cohesive look.

The stand has the same flexibility for adjustment, allowing the camera to be rotated 360 degrees and tilted back and forth to get most any angle.

New to v3 is the option to remove the stand and mount the camera on a tripod.

You can also attach it to a wall with an included screw mount, as well as place it on a flat surface.

Of course, it needs to be plugged into power (the $50 Wyze Cam Outdoor is the only battery-powered version on offer), and while the camera and cable are weatherproof, the USB power adapter is not.

A reset button and SD card slot are hidden under the camera, both covered by silicon seals.

The other design difference is that the power cable is permanently attached, well, half of it.

Presumably for weatherproofing, the camera has a short extension cable at the back with a USB connection port at the other end covered in a silicon plastic.

Here you plug in the included Micro USB cable and then pop the other end in an indoor socket. This feature makes it easy to swap out v2s for v3s without having to faff with redoing wiring.

Unfortunately, the cable is also only 6 feet long, making placement outside tricky without adding in a waterproof extension cable. (Wyze is developing an outdoor adaptor to solve this problem, but it's not available yet and there's no word on pricing).

To set up the camera you open the Wyze app, tap "Add Device", and follow the instructions.

It's quick and easy, and you should do this before positioning your camera as you can use the app to check the signal strength, key if you want to place the camera outdoors.

It has impressive range for a non-hub, Wi-Fi-based camera. We were able to get it set up out by our chicken coop - a good 120 feet from our house - and could view the live feed without a hitch.

The Wyze Cam v3 is packed with features that even a $20+ camera would be jealous of - 1080p HD video, color night vision, an 80dB siren, simultaneous two-way talk, and a customizable motion detection zone.

AI detection means the camera can pick out people as well as motion (although it needs some work - more on this later), and in addition to motion-activated recording, it will record when it hears sound - something none of the other budget cams offer.

However, it will only record for 12 seconds on each event, with a 5 minute cooldown period between events, which is a ridiculously long pause for a wired cam. The Blink battery-powered cams only require a 10-second re-trigger time.

To get rid of these restrictions you need to pay for Cam Plus, this gets you full-length recording with no cooldown plus person detection.

This starts at only $1.25 a month and considering Wyze is one of the few cameras to offer free 14-day cloud storage it's sort of a wash. But you really need Cam Plus for this camera to be of any use as a security camera.

A few other noteworthy features are the option for local storage with a microSD card (not included). This gets you continuous video recording and a cool timelapse feature.

The camera can also listen for smoke and CO alarms when it's indoors, and will automatically record a clip when it hears one, as well as send you an alert.

In the app there are loads of settings to tweak with to get the most out of the camera, including adjusting motion and sound sensitivity, changing the night vision mode, and adjusting the IR lights.

You can enable the all important two-factor authentication (text or app based) to keep your camera feed away from prying eyes.

Schedules, shortcuts, and triggers can be set up to turn your camera on and off based on time or events (such as your front door opening if you have Wyze Door and Window sensors).

There's no geofencing for automatically turning the camera off when you're home and on when you leave, but you can do this through a robust IFTTT integration.

As well as IFTTT, Wyze works with Alexa and Google Assistant - but this is limited to viewing a live feed on your display-enabled smart speaker or connected TV. With Alexa you can add person detection on the camera as a trigger for routines.

The Wyze Cam's 1080p HD video is significantly better than its predecessor the v2, and it does a really decent job indoors, with strong colors and nice clarity.

There's no HDR, so areas with direct light can be a bit blown out, but zoom works well and the picture is good.

However, when you go outdoors things aren't quite as sharp. While the colors are good, and contrast is decent, there's a lack of clarity and if you zoom in even a touch it all falls apart into unintelligible pixels.

The color night vision is impressive, with good color and better clarity. It's ideal for covering a small area like a front pathway or interior entryway. But bear in mind you lose some range with it.

We found the regular night vision to be more reliable if you want to see further out into a dark garden. You can switch between the two in the app.

The Wyze app is a bit cluttered, especially if you have more than one device. As Wyze has grown so has its app, resulting in it being bloated and confusing in places - a problem the Ring app has too. This means it can be slow to load and tricky to navigate.

You do get rich notifications though, where you can click on it and see the clip, so you can skip opening the app most of the time.

Plus, when you click a notification shortly after it happens it takes you to a live feed with a scroll bar so you can scroll back in time to see what triggered it. This is a great feature we wish more companies would adopt.

The action changes if you click on a notification a while after it comes through, in this case it takes you to the recorded video. Very smart.

Notifications are also super snappy - taking about 15 seconds from the motion occurring to the alert appearing. But there are So. Many. Alerts.

Definitely not a person, Wyze...

A combination of spotty AI and only one activity zone meant that we got constant alerts during testing when we had the camera outside.

Leaves blowing, swings swinging, chickens clucking - were all identified as people, barraging us with alerts even when we had set it to only notify on "AI events" in an effort to cut down the notifications.

Indoors this was far less of a problem, with the camera more accurately identifying people. Considering Wyze hasn't been in the outdoor camera space for very long, we expect this will get better as they get more data.

Additionally, Wyze says vehicle, pet, and package detection are coming soon and with that update hopefully there will be an improvement in the person detection.

Another feature we really liked is the simultaneous two-way talk. Lag time and spotty connectivity can make talking through a security camera with a push-to-talk feature beyond frustrating.

With the Wyze Cam when you hit the microphone button it opens up an audio channel similar to a phone call, so you can chat more naturally. In our testing it worked really well, with no lag time and clear audio.

Another option coming soon is a Spotlight Kit, which lets you add a small, motion-activated light to the camera - a great feature if you plan on using this camera outside.

Wyze Cam v3
This is a superb camera for an incredible value. It doesn't have the sharpness and clarity of a 4K capable cam, but it also doesn't have the price tag. As an easy, cheap, and smart way to check in on your home or garden, you just can't beat the Wyze Cam v3. The main drawback is limited smart home integrations, Wyze really steers you towards being part of its ever-growing smart home ecosystem, and no-one else's.
PROS
CONS
TAGGED    security cameras