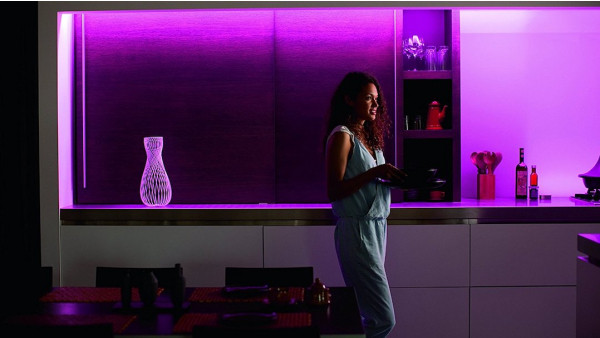 Philip Hue Lightstrips are an easy way of adding cool light effects to your smart home - made all the easier (and cheaper) now that Hue's lightstrips pack in Bluetooth - so you don't necessarily need a Hue Bridge.

Lightstrips are long thin strips of dimmable 1600-lumen LED lights (15mm high, 5mm thin) that pack Hue white and colour ambience options. The back has a strip of sticky tabs, making it easy to stick to surfaces where you want to add your lighting.

There's also outdoor versions that are weatherproof, so you can light up your front or back yard. These are a bit bigger, 20mm wide, are made of silicone and they attach with clips rather than sticky tabs.

Finally, and a bit different to the standard indoor and outdoor lightstrips, there is also the new Hue Play Sync Gradient lightstrip which adds a color-boost to your TV watching.

Here's everything you need to know about the Philips Hue lightstrip range...

How to set up Philips Hue Lightstrip

To set up a Hue Lightstrip, you'll first need to fork out ┬Ż69.99 for the Lightstrip Plus starter pack, which contains a 2m Lightstrip, plus the power cable and the base unit.

Unlike Philips Hue smart bulbs, which simply replace your dumb bulbs in regular light sockets, the Lightstrip is a standalone device that needs to be plugged into the mains.

You only need to do this once though - subsequent 1m long indoor Lightstrips can be purchased at ┬Ż19.99 a pop and added to the existing Lightstrip. You can have up to 10m of Lightstrips all connected, and joining them together is as simple as popping the pin-adaptors together.

If the area that you want to cover isn't a measurement that fits into the preset scale, don't worry - you can cut the Lightstrip. The back tab even has scissor marks showing the best places to cut. Currently, there are no extensions for outdoor Lightstrips.

Now, the official line is that you'll have to bin the excess Lightstrip you've cut off but, if you're handy with a soldering iron, you can (at your own risk) make them functional.

You control the Lightstrip just as you would a regular Hue bulb. Pair it up to your Bridge, assign it a room and give it a name in the Hue app, and away you go.

Actually, you control the base, which is attached to the power cable - that's the bit packing the radios to talk to the Bridge via Zigbee or your phone using Bluetooth. All of the Lightstrips you've connected are treated as one light within the app (and any extensions you subsequently make after pairing to your Philips Hue Bridge).

Just like regular Hue apps you can control it with Alexa, Google Assistant, HomeKit, IFTTT and SmartThings - the whole shebang - and it also, of course, works with Philips' native Hue controllers as well, such as the Tap Switch.

The Lightstrip Plus and the 1m extension strip are the only official Hue products in this area. However, there are some third-party devices that work with the Hue Lightstrip to help you customise further your lighting.

Litcessory is the specialist in this area - it provides a wealth of options for extending your Lightstrip, without having to have consistent lighting.

For example, you might want 2m of lighting behind an armchair, then a gap of 2m of no lighting, then another 2m of lightning behind another armchair. Doing this 'officially' would require two base-stations and two plugs - so two outlays for the Lightstrip Plus pack.

Litcessory provides cables that clip into the Lightstrip, which don't contain any lighting - they just carry the electricity. They have a range of different sizes - and they even have adaptors to do this using Ethernet cable.

However - the 10m maximum length suggestion remains, and that includes both lighting and cabling.

The Gradient is a different affair to what's been explained above - but is still a very cool way of supercharging your smart home lighting.

Unlike the usual Philips Hue lightstrips, which all have to be set to the same color, the new gradient model is capable of mixing up the shades and colors thanks to a series of individually addressable LEDs.

Need some inspiration of where to put your Hue Lightstrips? Luckily, there's a tonne of aspirational pictures on Instagram, Pinterest and the like - and we've rounded up some of the cooler ideas for you...

With a TV unit

As a vanity light