The portable smart speaker jumps out ahead of Sonos' own offering 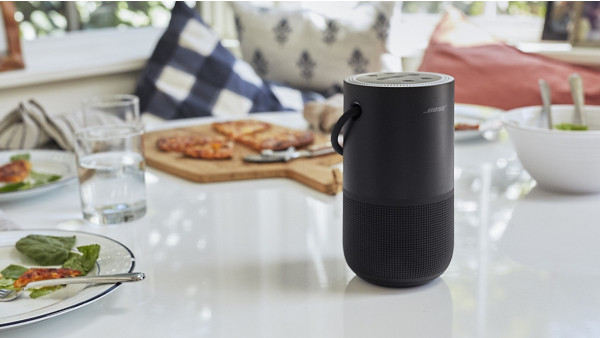 With an integrated carrying handle and a full range of connection options, including Wi-Fi and Bluetooth, the device is able to be used on its own or as part of a multi-room system. Bose says it will hold a 12-hour battery life, and the speaker is rated with IPX4 water resistance. That means a spring shower shouldn't hamper the device, although it won't take prolonged exposure to water.

The new speaker is 7.5-inches tall and 4-inches wide, while also weighing 2.3 pounds. It still packs in three passive radiators, a high-excursion driver, and a deflector to produce 360-degree sound. If you were to pick up two of them, Bose says that it will be allowing for stereo playback next year, too.

When connected on Wi-Fi, the Portable Home Speaker will be able to use Alexa or Google Assistant for voice control. The speaker also has a set of buttons around its top rim for manual control, like the Bose Home Speaker 500, comprised of a mute button along with other toggles to control power, volume, play/pause, virtual assistants, and Bluetooth. It's charged by USB-C cable out of the box, but a charging cradle will be available for $29, if you fancy giving it a semi-permanent resting spot in your home.

Bose's new speaker has a clear design heritage harking back to the Soundlink Resolve+, which also featured a handle and a similar size and shape. Bose is offering the latest speaker in black or silver finishes.

The Portable Home Speaker will make an interesting comparison to the recently rumored Sonos Move, which is expected to be announced over the coming weeks and pack a features list almost identical to Bose's new effort.

The Portable Home Speaker will be available from 19 September, and will cost $349. Stay tuned for our full review.