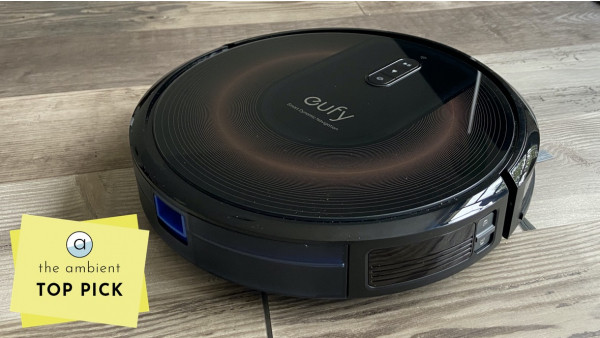 Eufy, like its Chinese compatriot Roborock, is making a big name for itself in the world of robot vacuum cleaners.

The latest model from the ever expanding line-up, the RoboVac G30 Edge, comes with a mid-range price-tag, but a high-end spec sheet and feature list.

Its $370 price-tag puts it head-to-head with the likes of the Roborock S4 but, in terms of the features on offer, it's a robot vacuum cleaner that deserves comparisons with pricier models such as the Roomba i7+ and the Neato Botvac D6 Connected.

Read on for our full Eufy RoboVac G30 Edge review to find out why it should be held in such high regard.

Slightly more expensive than last year's RoboVac 35C but with a similar design and form factor, the G30 Edge is 2.85 inches tall (73mm); that's 30-40% slimmer than the likes of the Roborock S range, and over an inch svelter than the latest Neato models.

Its slim build means it has cleaned places in my house that have never before been cleaned by the vast array of robot vacuum cleaners I've tested over the years - under cabinets, TV stands and the like.

Eufy does't stray too far from the mold when it comes to new RoboVac cleaners, once again we're looking at a shiny black affair, this time with blue and rose-gold highlights. It's super shiny - so much so that it is an absolute fingerprint magnet, just like a smartphone.

The good news is that you shouldn't actually have to touch it that often as you can control most things using the app or your voice - but more on that in a bit.

However, manual operation on the device itself is on offer, if you'd prefer. Up top is a charge button that'll send it home, a swirl button that makes it do a circular cleaning pattern, a start/stop button, and a Wi-Fi light that shows it's connected to your home network.

There's also a physical on/off switch on the side - you don't see that on other branded robo cleaners but Eufy seems to like the idea.

On the front face of the G30 Edge is a little blue inlet - slide your finger in here, push down the quick release and you can pop-out the dustbin when it needs emptying (which will be pretty often as it's quite small.)

At this point I should point out that there's also a non-Edge version of the G30, which is around $40 cheaper.

The only difference between the two is that the Edge comes with some magnetic strips so you can manually block off areas where you don't want your robot to go.

That's a suction power than puts it on a par with high-end robo vacs such as the Roborock S6 and the Neato Botvac D7 Connected; a pair of heavy hitters that will set you back double what you'll pay for the G30 Edge.

There are three power modes on offer, which can all be set in the easy-to-use EufyHome app; standard, turbo and max.

However, it's the 'fourth' option that you'll probably find most useful - BoostIQ. With this feature switched on you're leaving the decision up to the machine itself, based on what surface it detects it's on. It takes more power to clean a carpet than a wooden floor, for example.

Whatever mode you choose, you won't be disappointed with the level of cleaning; the G30 offers a fantastic performance, even if it's the first RoboVac we've come across that uses one side brush (for getting into tight corners) rather than a pair.

It navigates the optimal direction around your floor plan using 9 sensors - a few less than you get with a Roborock - and that might be why I found it to be a touch more clumsy than any Roborock models I've tested in the past. It's also quite a slow cleaner, taking around 20-30% longer to clean an area than rival vacuum cleaners.

And that puts it under a bit of pressure for larger areas as the 100-minute battery life is only really on offer if you choose standard suction.

If you go for max, or indeed BoostIQ, you can expect to lose 20-25 minutes of battery life.

However, there is an auto-return feature available in the app - which needs to be manually turned on - which takes the G30 Edge back to its charging base when the battery level is low. It will then resume cleaning from where it was once it's charged back up to 80%.

You don't have to worry about it restarting a clean in the middle of the night though as there's a 'do not disturb' mode in the app whereby you can set time periods you don't want the RoboVac to operate within.

The EufyHome app, as mentioned, is one of the easiest to use platforms I've tested with all of the main functions and features easily findable and it's also very clear when it comes to changing the G30's settings.

One area of the app that isn't all that useful though is the mapping function. Sure, it's great that you can see a virtual map of your cleaning area's floor plan but, unlike Roborock's similar feature, you can't actually do anything with that map; room settings, start-points, no go areas and the like.

If you're a Google Assistant or Alexa user, you can use the voice assistants to direct the G30 to go home, start and stop cleaning - or ask where it's disappeared to.

The G30 will also talk back to you; voice packs are available in a few different languages.

Eufy RoboVac G30 Edge
The latest budget(ish) RoboVac out of the Eufy stable is its most impressive model so far and compares well with higher-priced robot vacuum cleaners. Yes, the same is also true of the slightly-cheaper Roborock S4 and yes, its countrymate rival has a few more bells and whistles, but that doesn't take away from the fact that the G30 Edge is a very compelling offering; especially given the ease of use with the super straightforward app and features like BoostIQ.
PROS
CONS
TAGGED    robot vacuums