Is this Echo alternative worth the extra cash? 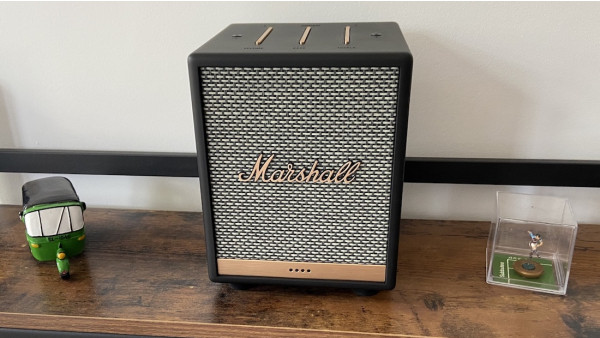 The latest (and smallest) Marshall smart speaker went live earlier this year - the Alexa-packing Uxbridge Voice, which comes with a Sonos One rivalling $199 price-tag.

Sitting alongside its bigger stablemates, the Marshall Stanmore II Voice and Action II Voice, there is also a Google Assistant version of this smart speaker but, for the purposes of this review, I've been putting the Alexa model through its paces for the past couple of weeks.

Read on for my Marshall Uxbridge Voice review.

The Uxbridge Voice (it gets its name from the street where the first Marshall amp was sold, by the way) comes in either a white or black finish and is a diddy little smart speaker; measuring 128 x 168 x 123mm and weighing just under 1.4kg.

Price when reviewed
$170
Buy on Amazon

Obviously designed to resemble the iconic Marshall Amps, the Uxbridge Voice doesn't have the trademark vinyl (faux-leather) covering of its pricier stablemates, instead it's a smooth finish alongside that all-familiar salt and pepper fret, with the Marshall logo front and centre. It's a touch plasticy, but in no way cheap-feeling.

Up top there are three rockers for physically customising the sound - volume, bass and treble. You are also able to do this using the Marshall Voice app but more on that in a bit. There's also a button you can push to mute Alexa, should you wish.

Unlike the Stanmore II and Action II, there's no 3.5mm port for plugging in your headphones, so you are limited to purely wireless music methods. The good news on that front is that there are a ton to choose from.

Marshall's smart speakers are super simple to set up. In the case of the Uxbridge you just plug it in, download the Marshall Voice app and search for the speaker. Once it pairs with your smartphone, you then connect it to your home Wi-Fi network, sync in to your Amazon account and you're good to go.

You don't actually have to set up Alexa if you don't want to - the Uxbridge Voice can be used purely as a Bluetooth speaker but you'd have to question yourself as to why you'd buy an Alexa smart speaker and not want to use the voice command features Amazon's digital assistant affords to you.

Once you've got it all synced up there's a wealth of wireless streaming options for you to make use of. The speaker itself is Bluetooth, as mentioned (4.2 if you're wondering) and is both Apple AirPlay 2 and Spotify Connect compatible. The Google Assistant version also throws Chromecast into the mix, as well.

Obviously, with Alexa, you've got a hell of a lot of streaming services you can tap into (dependent on where you live) such as Spotify, Deezer, Amazon Music, Apple Music, Tidal, TuneIn, SiriusXM, Gimme and many more.

You are reliant on using your voice or the Alexa app (or a platform specific app if you're in Bluetooth mode) to control your music; the Marshall Voice app itself is simply used for tweaking the speaker's sound - there's no way to actually browse your music sources.

The EQ settings within the Voice app are a bit more refined than the physical rockers on the device itself, so you can get a more granular profile. Plus, there are pre-set profiles you can select as well such as Jazz, Rock, Pop, Metal and Spoken (which is obviously good for podcasts and talk radio).

The good news is that the Uxbridge Voice is all set for multi-room speaker action. The bad news is there are some caveats.

On the Alexa version of the speaker, the only multi-room streaming option is through AirPlay 2, which allows you to join your Uxbridge in groups with other AirPlay 2 compatible speakers. You can't use the Uxbridge as part of an Amazon Echo multi-room setup (yet, at least; we're told it is coming).

On the Google Assistant variant of the Uxbridge Voice you can also group the speaker with other Chromecast-enabled speakers.

As I always state on any speaker review that uses the likes of AirPlay 2 or Chromecast for multi-room audio, don't expect an absolutely seamless affair. Chances are you'll experience some syncing issues. Both Apple and Google's platforms are great, but it's never going to be as perfect as keeping to a specific brand using its own software and wireless protocols (as per a Sonos system or a group of Apple HomePods).

The Marshall Uxbridge Voice packs a pretty powerful 96dB punch, thanks to its built-in 30 Watt Class D amplifier for the woofer and tweeter.

In real world testing this relates to a decent, room filling sound. I found, using the Uxbridge in my study, that at medium volumes the sound quality was great; albeit with somewhat of a narrow soundstage, with individual instruments blending a little.

The only major quibble I have with the sound quality is when you take it anywhere above around 60% volume. It can go loud, very loud, but it also gets a bit messy and maybe even a touch distorted. The bass is there, especially if you use a relevant pre-set EQ, but it overshadows the treble at loud volumes. I found it difficult to get a good balance no matter how much I tweaked.

Whether this is a red flag for you is down to what you expect from it. Personally, I wouldn't ever use a speaker of this size for top-volume listening in a 'main' room in my house; especially when the mid-level is pretty accomplished at room filling sound. On the other hand, the Sonos One packs a better loud-punch from a similarly sized glove.

It's a much better sound that you get from the Amazon Echo; but it's also twice the price.

On the front on the Uxbridge, below the mesh, are an array of LED lights that give Alexa a physical presence.

Effectively they mimic the lights you get on an Echo smart speaker, lighting up blue when you use the wake word and also shining yellow if you have a notification.

In terms of using the Uxbridge as an Alexa hub, the results aren't as good as if you'd use a native Alexa speaker from the Echo range. Every so often the wake word wouldn't be heard and occasionally commands were just lost into the void.

It's a pretty similar story to what you'd expect from the likes of the Sonos One. However, with both speakers, I'm talking about only a very slight drop in Alexa responsiveness compared to an Echo. It's certainly not a major concern or any reason to not consider the Marshall.

Marshall Uxbridge Voice
As a standalone speaker, say for a bedroom or a kitchen, the Uxbridge Voice is a great option with a plethora of streaming options on offer. It looks the part (almost) and the sound quality is good at moderate levels. Alexa is on board and works well enough, and the setup is a breeze. Where it falls down is that you're paying a premium for features where it doesn't really excel. We wouldn't recommend it for any serious multi-room action and it's definitely not as high quality, in terms of audio, as similarly priced rivals such as the Sonos One - despite having those additional EQ options.
PROS
CONS
TAGGED    speakers