Find out which smart speaker is best for your home 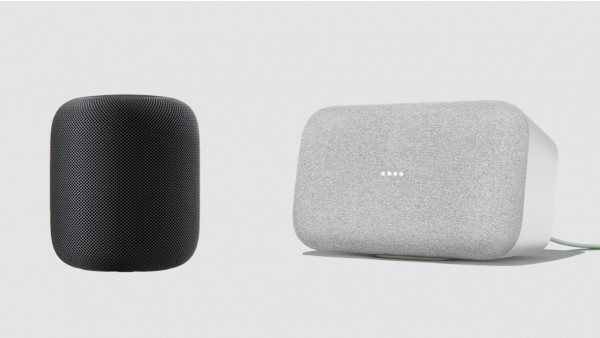 Smart speakers no longer have to mean compromising on sound quality, something both the Apple HomePod and Google Home Max nicely demonstrate.

These are the best-sounding smart speakers Apple and Google have to offer. Well, Apple only has one speaker, so it wins there by default, but the HomePod is certainly no slouch in the acoustics department.

So with that in mind, we've pitted these two titans against each other in a battle of brain, brawn and delicious bass. Let's go.

Really, the HomePod and Google Home Max could not look more different. Apple's speaker sits at 6.8 inches tall and 5.6 inches wide, wrapped in a mesh fabric that comes in a choice of white or black. It has a cylindrical form, but one that's much wider than either the Amazon Echo or the regular Google Home.

Yet it's nothing compared to the Google Home Max, an absolute behemoth that wants to be very much seen and heard. 13 inches across, 7.6 inches tall, and 6 inches deep, with a more block rectangular shape. It's large. It's in charge.

The Home Max weighs a ton, too. Well, 12 pounds to be exact, and it's not something you want to be moving around much. Drop the Max and it won't be the speaker you'll need to worry about, but the ground it hits. Like the HomePod, the Max comes in two colours: a white and grey, or a black. The front of the speaker is covered in fabric, but the rest of the body is a polycarbonate housing, giving it a more obvious two-tone design next to the more consistent HomePod.

Whenever the Google Assistant is listening to you on the Max, four white lights will appear on the front of the speaker. On top of the Max is a touch-sensitive control panel for adjusting volume and playback controls on top. Swipe across to control the volume (or up and down if you have it stood vertically). It is a little sensitive, but faster than asking the Assistant to do it. The HomePod has its own touch panel on the top too for volume and ŌĆō with a tap ŌĆō summoning Siri.

One thing the Max has that the HomePod doesn't is a physical mute switch on the back. Slide it across and the Google Assistant can no longer hear you. You can mute Siri on the HomePod, but you have to do it in the Home app on your iOS device.

So, which is better on design? That depends on what floats your boat. The HomePod is much smaller, but the Max has a more classic speaker design, if that's what you're into.

The Home Max is one of Google's immediate family of speakers, which means it's always up to date with the latest Google Assistant features. Compared to the rest of the Home range, the only thing the Max is missing is a screen, which you'll only get on the Nest Hub and Nest Hub Max speakers.

Otherwise, the Max behaves just like the Google Home and Google Home Mini. But louder. Much, much louder. You'll be able to control all of your connected smart home devices that work with Google Assistant, and the Max supports the same range of music streaming services.

If it's a case of the Google Home Max or another third-party Google Assistant speaker, the benefit of the Max beyond sound quality is the assurance that you'll be first in line for new features. Voice calling is a good example of a feature that was sluggish to move beyond the inner circle of Home speakers.

Compared to the HomePod, the Max is still the smarter of the two. There are two reasons for this: Google Assistant is smarter than Siri, and the platform supports a wider range of smart home devices from other companies. Of course, if you are deep into HomeKit, the HomePod is a clear winner, as you'll be able to use it as a HomeKit hub and control all of your gear by commanding Siri.

But while we do bemoan Siri's cognitive inferiority, there are some ways in which the HomePod does impress. Music is one of them ŌĆō and not only because the HomePod sounds great, but because Siri is a pretty good DJŌĆ” if you're an Apple Music subscriber. If that's you, then the integration with the HomePod is really good.

But if you're not an Apple Music subscriber, you can still get by, as the HomePod is also a great AirPlay 2 speaker. So if you have an iOS devices (and obviously you should if you're buying a HomePod), you can stream whatever you like; it's just that Siri won't play nicely with other services, like Spotify.

For obvious reasons, the Google Home Max is not an AirPlay speaker, but luckily the Google Assistant is more agnostic about music platforms, and so long as you've linked it in the app, you can have the Assistant play from Spotify, Pandora, TuneIn, iHeartRadio and more.

This is the one a lot of you came to read about, andŌĆ” it's an interesting one. In short, the Google Home Max delivers more of a wallop, but the HomePod is better tuned and, overall, we think it's the better sounding speaker. But only just.

Here's the specs dump: HomePod has seven beam-forming (translation: they create a wider soundstage) tweeters and one large woofer. The Google Home Max has dual woofers and two tweeters. Now, it's not just a numbers game, and it's a close competition. In fact, we know there are plenty of people who disagree and think the Home Max produces the better sound quality.

Read next: How to set up Apple HomePod stereo mode

One thing the HomePod has in its favour is its auto-adjusting EQ, meaning it's constantly reading how sound is bouncing off objects around it, and it will automatically calibrate its sound performance accordingly. The Google Home Max doesn't do this. What the Max does have is shattering bass, but we do often find ourselves wishing it was a little better balanced.

Finally, both the Google Home Max and HomePod can be paired with another of their own for stereo sound.

Earlier this year Apple slashed the price of the HomePod down from $350 to the current $300. Meanwhile, the Google Home Max is $299.

In the case of the Google Home Max and HomePod, we think the choice comes down to this: smarts or sounds? If it's purely about choosing the best-sounding speaker, the HomePod is our champion. But the Home Max has the benefit of Google Assistant, a much stronger and more vibrant smart home platform right now. HomeKit is getting better, yes, but Home has a better assistant and a wider range of third-party integrations, and, for the foreseeable future, it's the clear winner in the smart home.