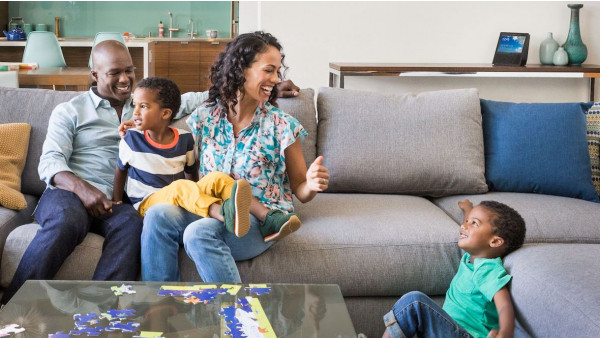 One of the driving ideas behind smart homes is the ability to make that home, sweet home more personalized to you. Your lights turn off when you go to sleep; your thermostat gets your home comfortable before you get home from work.

It's a great idea, but it's an idea that - thus far - has been more realized for individuals. Smart homes have seemingly forgotten that homes are places where groups of people live. This makes controlling a smart home an annoying affair for families, or, in the most dire circumstances, ripe for emotional abuse, as we discovered this week.

Spoiled rotten: What it's like to live in Vivint's smart home

Over the last six months I've been building a smart home. I've managed to build out a good selection of connected devices - Nest's Smart Learning Thermostat, Hello doorbell, Secure and Nest x Yale Lock, to name a few. I've also got HomeKit hooked up to my Apple TV and Lifx lights, while my Google Home Mini and Amazon Echo smart speakers vie for my attention.

I used to think that assembling that many smart home products would be the difficult part, but here's the thing: I live with my family. And I've come to realize that this is the real challenge.

The one product no one in my home uses is the Nest Secure. I've got a family of four, and none of other three set the alarm when they head out the door. Because each of us have different schedules, we all leave home and arrive back at home at different times. This means that setting the alarm forces another person in the family to deactivate it.

It's created this weird cycle where no one feels the need to set the alarm. For a while, I was the only one doing it, but I'm also the third, and sometimes fourth, person to come home - which means I typically have someone annoyed they had to disarm the Secure. What's ended up happening is that I stop securing the alarm in the first place, too, so now it just sits there, acting as a hub for the Hello and Nest x Yale lock instead.

These are two devices everyone in the home uses, but they do so in minimum ways. Both devices let you interact with the smartphone or other means. When someone rings the Hello, a chime is heard in our home - plus, our Google Home is set up to announce someone is at the door.

However, the only people who actually uses the Hello's smart features - like checking video or responding via text replies or chat - are my mom and myself. The other two people in my family simply go open the door without checking who it is, turning the Hello into a very expensive regular doorbell for half our household.

Similarly, the Nest x Yale Lock has worked out the same way. It's got a keypad on the outside that lets you both lock and unlock the lock. It's far easier to use the Nest app to do both things, as the friction in opening the door is reduced to nothing. However, two people in our home still haven't downloaded the Nest app to use any of these features, despite invitations to do so.

And, well, it's fine. If they want to treat a smart home product as a dumb home product, it's cool - as it doesn't affect the two of us that do take advantage of the smarter features. Where things go wrong, however, is when the smart home products don't give you the luxury of choice.

None of the lights

Using the Lifx smart lights are a constant battle. Everyone in my home has an iPhone with the Home app, and we're on a family account that lets us all use the same HomeKit products. We all have equal control, yet the Lifx lights give us the most problems.

My dad tends to wake up before sunrise for work, he turns on the lights with the Home app and turns them off when he heads off for the day. Or at least he tries to. My mom tends to stay up later than the rest of us, and sometimes she'll forget to use the Home app. So she'll flip the literal light switch, which ends up turning off the lights and their connection to HomeKit.

Thus begins a convoluted series of light switches. My mom gets confused and flips the switch from off to on and then back to off again when she's done. Then, when my dad wakes up to go to work, he'll try to use the Home app to turn the lights on, only to find out the connection has been severed. So he'll flip the light switch and turn them on. Rather than use the Home app to turn the lights off, he'll flip the switch and, once again, sever their connection to HomeKit.

Later on in the day, when we're all at home and the sun is going down, we'll wonder why the lights haven't automatically turned out - as our automation is written - typically discovering that someone flipped the switch and disconnected the lights.

The problem? People are different, and different people have different habits and preferences, things that they find easier or more convenient. My dad prefers using the Home app, as he cannot deal with speaking specific commands to the likes of Alexa, Siri and Google Assistant. My mom prefers speaking to assistants or getting notifications, which is why she's taken to the Hello so well. Then there's my brother, who prefers HomeKit devices because he can quickly do things from Control Center on his iPhone.

That means that a system with as many interaction methods as possible is going to have far less friction. A good example of this is Vivint's system, which my family was using in full a couple weeks ago. It's basically a full-service deal that sells smart home packages filled with sensors and a central hub. You can even add in devices from other companies, like Nest, Philips and Google.

There are two primary interaction methods with Vivint: The companion app and a tablet that acts as a central hub. This tablet is open to anyone, and it can be used to control any device connected to the Vivint system. So if you don't want to use the app to arm the security system or turn linked lights on or off, you could use the hub instead quite easily.

And, well, that's exactly what happened. My dad opted to use the hub to turn the lights on or off, or to open and close our garage. Meanwhile, my mom took to using Vivint's Google Home integration (it also does Alexa, but we didn't set that up). It actually worked relatively smoothly, except that Vivint doesn't have HomeKit support yet, so my brother just didn't participate - but it was so, so close to being a perfect solution for us.

So how do I solve this problem now that I know I can't customize my home for myself? Well, it's not that my family is disinterested - they are. My brother has a great time using the Lifx lights in his room, while my dad enjoys being able to turn off the lights from work if he forgot to do it before he left. My mom loves answering the door from her phone.

See, homes are extremely personal spaces. Old, dumb homes have features and appliances that are controllable by anyone at every time in whatever fashion they want to use it. That ultimately means that smart home manufacturers need to realize that they need to lower the barrier to control. If you've ever tried to get your friends to download a messaging app, you know how difficult it is to get people to change the way they do things.

If an app is the only way to control your smart home device, you're going to see resistance from people. You need to give people options, whether that's support for all smart home platforms, or voice assistant support, or smart panels that make control universal. The smart home needs to prioritize ease of use and choice. It needs to think about the whole family.