The best Philips Hue apps to shake up your smart lighting

Our picks of the third-party Hue apps worth downloading 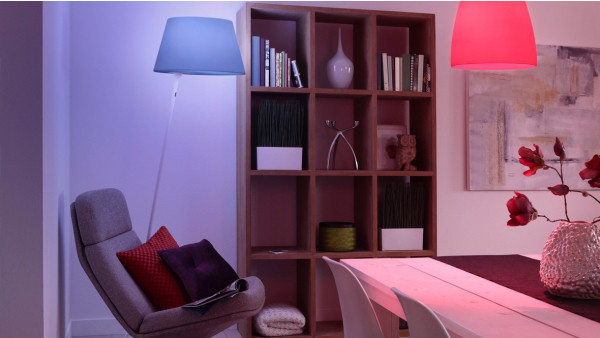 The Ambient is reader-powered. If you click through using links on the site, we may earn an affiliate commission. Learn more
David Ludlow
@daveludlow
Friday

What the regular Philips Hue app gives in function, letting you set up scenes and control the colour and dimming level of your smart light bulbs, it lacks in fun.

Where are the dynamic lights that shift through colours automatically, or lighting that changes colour to match daylight?

Fortunately, all of these features and more are available thanks to HueŌĆÖs surprisingly open API that allows pretty much anyone to make their own app. Switch to one of our best Philips Hue apps and youŌĆÖll find that your light can do so much more than you thought.

As you can imagine, the choice is overwhelming, with hundreds of apps of pure dross out there. WeŌĆÖve trawled through a tonne of apps to find out which ones are best, looking for those that extend the experience and add something new.

There are different apps for iOS and Android, but weŌĆÖve noted down which of our choices are available for each, so you can pick out the best for you.

All Hue apps have to be linked to the Philips Hue Bridge by tapping the connect button when prompted on-screen. It does mean that if youŌĆÖre running Hue lights in Bluetooth mode, you wonŌĆÖt be able to use any of these apps.

In many ways, OnSwitch is the app that Hue should have built. Compatible with Hue and Lifx smart bulbs, OnSwitch gives you all of the basic control you'd expect, but distinguishes itself with its array of dynamic scenes.

Whether you want to recreate the effect of clouds passing over, a fireworks show or the warm glow of a fireside, OnSwitch has everything you need. A large selection of scenes are free, but some are in-app purchases.

OnSwitch continually adds new scenes (many of which are paid-for), giving new options to the season or even sporting events.

iConnectHue is one of the most comprehensive third-party Hue apps in the business at the moment, and itŌĆÖs only available for iOS. It has a wide range of features include automated timings, music syncing, simple light grouping, intuitive color management and plenty more besides.

You've got a huge choice of scenes and animations to pick from inside the app, while you can customize the app to bring the settings and the features you need the most to the forefront. It works with just about every Philips Hue accessory too, including the dimmer switch and motion sensor devices.

An Android-only app, QuickHue puts an on/off switch in your phoneŌĆÖs pull-down Quick Settings, so you can quickly control your lights. ItŌĆÖs really as simple as that.

ThereŌĆÖs a free version available, which gets you a single control, but upgrade to the Pro version ($1.99) and you can add up to six. This app may lose some of the fancy features of other apps on this list, but itŌĆÖs a useful addition and can save time delving through other apps.

A current favorite at Ambient Towers, hueDynamic has made a name for itself with its "ambiences" and "experiences", with new scenes added daily and more features than you can shake a light strip at. Want to get the party banging? There are some neat sound to light disco modes in here. You can even create ambiences from photos.

hueDynamic also lets you point your phone's camera at the TV while you're watching a movie to sync your lights for added ambience. And here's a welcome bonus: You can control lights on multiple bridges without having to switch between them.

One for Apple users only, obviously, the Home app might seem like a strange addition here, but it now offers one feature that Hue doesnŌĆÖt: Adaptive Lighting. When you select the Adaptive Lighting option in the Home app, your selected apps will adjust colour temperature automatically through the day: warmer in the morning, colder light in the middle of the day, and no blue light for the evening.

The only minor issue is that if you use a Hue wireless switch to change mode, you disable Adaptive Lighting. One workaround is to use a HomeKit compatible button, such as the Flic 2 (hub required), and set this up to turn on Adaptive Lighting.

Yonomi lets you automate your home with powerful routines, supporting devices from most major manufacturers, including Philips Hue. For example, you can have your Honeywell Evohome change mode, your Hue lights turn off, and your Sonos player stop when you leave home.

Yonomi has basic control over Hue lights only, but as a powerful way to control your home automatically, it's an excellent addition to any smart home. Even better, its controls operate faster than similar rules using IFTTT.

Check out our comprehensive guide to Yonomi.

By default, the Hue app only gives you rather boring static light settings. Thorlight improves on that with dynamic lighting effects that can shift and move through the colour spectrum.

You can use the app to link lights that are physically near to each other, so that Thorlight's animations can spread and move more naturally through a room, giving a more involving and deeper effect.

There's an impressive range of free animations and scenes bundled with the app, but there are also other options that you can unlock with in-app purchases.

If you're having a house party, or just want to liven your music up, HueDisco is the app for you. It uses your phone's speaker to listen to background music and then makes your Hue lights pop and flash in time to the beat, giving you an instant disco.

You get full control over how fast the lights change (we found slower works best even for a party), the colours used and the maximum brightness. And you can choose which bulbs you want to be part of the disco, leaving some lights on for mood lighting.

iLightShow works along similar lines to Hue Disco, but it's specifically for syncing your lights with whatever's playing on Spotify or Apple Music ŌĆō so this isn't an app to go for if you do all your streaming through YouTube Music or Deezer. As an added bonus, it works with Lifx and Nanoleaf lights too.

All you really have to do is connect your lights and connect your music service of choice, and the app takes care of the rest. There are a few customization options to play around with however, letting you control the brightness, saturation, colors and timing of the light show generated by your playlists.

The Philips Hue Play Sync box can sync lights in your room to the on-screen action, giving you an immersive light show. ItŌĆÖs an expensive option, though, particularly if you splash out on the new Philips Hue Gradient light strip.

With the Hue TV app, you use your phone or tablet's camera trained on the screen, Hue TV changes your Hue bulbs' colour to match the on-screen action. Using the app means you can't use your tablet or phone for anything else at the same time, but it's worth it for the extra experience that Hue TV brings. Also works with Lifx bulb

If you're looking to turn your Philips Hue (you can add in your WeMo or Lifx too) lights into a stunning light show to make your room a showstopper, Lightbow for iOS is essential. It's one of the largest libraries of light shows you can get.

Not only that, but there's a fairly powerful editor that you can use to create your own light shows. You can control each light step, the duration of the light step, the colour of the light step, fades between the steps and the overall duration. There's also a $24.99 yearly subscription that'll get you access to all presets as they continue to be added to the app.

If you want the slickest synchronization between Spotify and your Philips Hue lights then Prismify is worth a look (as long as you've got an Android phone rather than an iPhone): it aims to be as precise and real time as possible, building on a detailed analysis of your Spotify tracks to create a light show that really does feel perfectly matched.

Another area where the app stands out is in its customization options. You can play around with the different sync settings inside the app, and even get Prismify to remember the lighting timings and colors that go with certain songs so that they can be repeated the next time the tracks come round again. Whether you're looking for a disco or an ambient effect, Prismify can help.