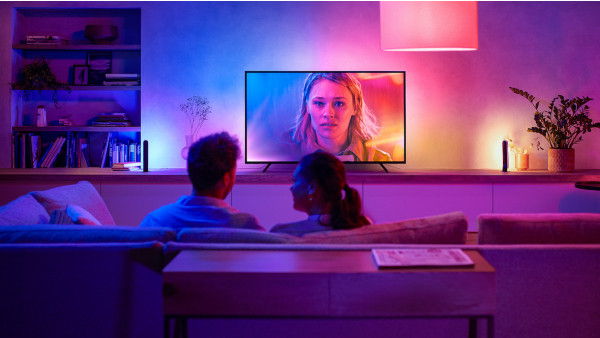 Signify - the parent company of smart light market leader Philips Hue - always goes big for IFA, and this year is no exception.

Amongst an avalanche of new smart light bulbs and lamps announced at the Berlin tech expo (yes, it is actually still happening), the standout new device is the Philips Hue Play gradient lightstrip, which adds Ambilight features to your TV.

Unlike the usual Philips Hue lightstrips, which all have to be set to the same color, the new gradient model is capable of mixing up the shades and colors thanks to a series of individually addressable LEDs.

It's a setup that Philips has had built into TVs for years, with its Ambilight sets, and one that has been made possible in the past few month with non-Ambilight TVs, from any brand, courtesy of the awesome Philips Hue Play HDMI Sync Box.

You'll still need the ┬Ż299 Sync Box to fire up the Play gradient lightstrip, which itself costs between ┬Ż160 and ┬Ż200 depending on what size TV you've got; 55 to 85-inch TVs are all catered for.

So, yes, it's a pricey setup but it's by far the simplest way of making the most of the Sync Box which, previously, relied on an array of lights around your TV, as per the demo from our Sync Box review.

You can actually make use of the Hue Play gradient lightstrip without the Sync Box if you're planning on using it with your PC monitor - Signify has a Philips Hue Sync app that uses your computer for the ambilight processing power.

Aside from the headline hogging new lightstrip, Signify also used IFA 2020 to take the covers of an army of new smart lighting options.

The Hue Iris lamp has been updated for 2020, with improved 570 lumens of brightness, super low dimming, Bluetooth and some swanky new metallic finishes; gold, ros├®, silver, and copper.

There are also a pair of new Bluetooth Hue bulbs with the E12 candelabra (White and Color Ambiance) being added to the range.