It's been another busy week in the world of the smart home, with lots of hardware announcements and rumors, including Facebook's new Portal smart displays and a rumored Google-made Android TV.

With Amazon and Google hardware events just around the corner, the tech bigwigs are clearly gearing up for a big holiday season. (We know, it's only September!)

Another big story this week was the release of iOS 13, which traditionally breaks a smart home device or two (this time around it's August and Yale smart locks). But the big update for Apple's iPhone also brought with it a much-needed redesign to Apple's Home app. Read all about it here.

For the rest of the week's smart home news, read on.

New Google Nest Minis are right around the corner. Likely to be announced at Google's event on 15 October, some people have jumped the gun, with an Irish retailer posting the availability of a new Google Nest Mini in Rock Candy and Anthracite colors on its website, according to 9to5Google.

The new speaker is rumored to have better sound, a wall mount, and a 3.5 mm stereo jack, something the Echo Dot has had since launch.

Yes, your Smart TV is spying on you

Researchers have found that smart TVs and TV streaming devices from Roku and Amazon are sending data to outside companies that the users hadn't previously interacted with, according to a report from the Financial Times.

Researchers at Northeastern University and the Imperial College of London tested a total of 81 devices in both the US and UK to determine how much data these devices were collecting and where they were sending it. It turns out a lot, and to companies such as such as Mixpanel.com, which tracks users to help companies improve their products.

"Nearly all TV devices in our testbeds contacts Netflix even though we never configured any TV with a Netflix account," wrote the researchers. They also pointed out that devices with screens collected and shared more data than other connected devices.

Starting next month, Alexa has a new trick up its sleeve; political donations.

Want to help out your favorite candidate in 2020? Just say ŌĆ£Alexa, I want to make a political contributionŌĆØ or ŌĆ£Alexa, donate $5 to [candidate name].ŌĆØ

The least you can give is $5 and the top level taps out at $200, everything is processed via Amazon Pay, and you get an email receipt.

Amazon announced the new feature in a blog post, explaining that the AI doesn't have any opinions on the candidates, but that it wants to offer users objective "relevant, accurate, and timely information about elections and candidates. "

Here are some things you can ask:

MacRumors posted screenshots of a new "Items" tab for the new Find My app that debuted in iOS 13, which is an amalgamation of Find my Phone and Find my Friends.

An "Items" tab in the screenshot says, "Tag your everyday items with B389 and never lose them again." B389 appears to be the codename for Apple's location tracking Tile competitor.

The tag will probably be a small device you can attach to important items such as your wallet, briefcase or bicycle, and keep track of through your iPhone.

Samsung says we should scan our smart TVs for malware. Is it right?

The problem with smart TVs in 2019 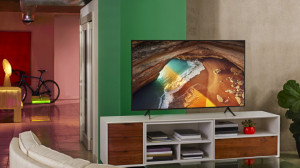 Apple HomeKit Secure Video explained: How it works and what you'll need

Everything you need to know about the upcoming feature